Cold Heat is back! If you’ve been reading this blog at all in the past couple years you know my love for Frank Santoro’s work and for Cold Heat (it’s issues made my best of list in 2006 and 2007). Four issues, of a projected ten (twelve? it appears to have shrunk over time), were published from mid-2006 through mid-2007 at which point the pamphlets were cancelled. The whole series was then rescheduled to appear as a single volume. In the meantime Santoro has been collaborating with a number of other artists to produce the Cold Heat Specials as stand alone mini-comics in a variety of formats (my review of the first couple specials). Now, in another manifestation, Jones and Santoro are releasing the rest of the original series’ issues as double-issue limited edition pamphlets. The first of these double issues, containing issues five and six, just hit the streets, or rather the internet. You can order copies from Picturebox for $20. Yes, a bit costly, but as they note, it’s not because of mark-ups. Small run color comics are not cheap to do.

If you are not familiar with the series you can read the first four issues online for free. You might also read my reviews of issue one and issue two as well as some more general comments on Santoro’s work (never did get to reviewing three and four).

I’m not going to talk about specifics of the story. At this point, I’m just enjoying the ride and hoping, in the end, that the story will offer even close to the satisfaction of the images, though issues five and six seem to be starting to pull it all together. Jones and Santoro have paid attention to the pacing of the issues, so even in this double issue the middle has a cliff hanger. In general, issues five and six offer the kind of plotline converging big bang up confrontation that you often see as a precursor to the real climax of a story. In this case, that means Santoro’s art is even more frenetic than usual. Patterns, particularly different strip patterns, and textures take over much of issue six. At times, the pages are a beautiful visual chaos that nicely mirror the plot’s occurrences.

What really struck me in reading this issue(s) are the variety of textures and lines that Santoro uses. As I understand the process (from a video up online), he’s producing the comic with two colors as separately drawn layers (which is the traditional way to do any kind of print, usually with a separate plate for each color). You can tell he is using a wide variety of media and tools on each layer. The advantage in his method is that in drawing the layers he doesn’t have to worry about the color he’s making on the original, only texture, transparency, and line weight. The color is produced from the layer, allowing for uniformity to then be applied. What we get because of this, is a comic that, while only using two colors, has an enormous variety of textures and lines. Santoro is clearly making use of ink, pencil, crayon/conte, watercolor, and what might be ballpoint pen. I (probably you too) haven’t seen a comic with this variety of textures and lines that still retains a real coherent color quality. This isn’t McKean/Sienkiewicz style collage where the different media are often used to deliberately offer highly contrasting levels of reality, subjectivity, etc. (think of Elektra: Assassin and the way Sienkiewicz draws Elektra’s childhood scenes with crayon in great contrast to the other painted scenes). Santoro is using a real printmaker-ly attitude to offer visual variety in two-dimensional art that does not take up a painterly approach. The painterly approach to comics, if truly painterly, will, when printed on paper, lose those qualities of painting which need to be seen physically (the build up of paint, brushstrokes). Printmaking, a reproducible, more two-dimensional method, allows for a different approach, one is naturally more suited, if rarely used, to comics (A greatly different printmakerly approach to comics would be Frederic Coché’s work). Santoro’s use of these textures is clearly progressing over the course of the series. The early issues use a lot more flat areas of highly saturated color, while this double issue offers a greater amount of textured fields and patterns. I see this as an artistic progression through the series, though it could be a matter of the content in these issues requiring a less solid and stark use of color.

Similar to my feelings about Mazzuchelli’s use of color in “Discovering America”, I’m awed by the use of only two colors to get such a plethora of hues and shades. Again this is a printmakerly approach to color, layering transparencies and textures to get more colors than simply the two that are printed. You don’t see this approach often in comics. In issue three he even recreates the traditional four color printing process of using dots. A few panels use a very fine dot pattern of blue, pink, and both to create different light background tones.

Here’s one panel from issue six that shows off the color, textures, and lines at work throughout the issues: 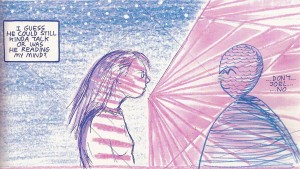 Note the various textures: the crayon like blue field at the left, the watercolor wash of pinks on the right, the perhaps ballpoint pen delineating Castle (on the left), the soft pencil work in the alien on the right. We can also see the variations in transparency of color as well as the purple that emerges from the mixing of the blue and pink along the left side of Castle.

Santoro also freely shifts the way he renders characters and objects. In one panel they take on a sketchy realism, while in another they take on an exaggerated caricatural quality. The above image showcases the latter type of rendering, exaggerating Castle’s expression for emotional effect (also another example of tone/texture, this time using closely placed fine vertical lines). The image below shows a more realistic Castle, in both pose and rendering (also showcasing some of the geometric patterning that is prominent in these issues). 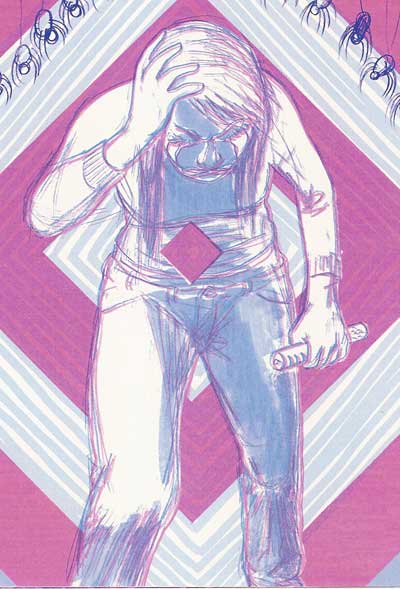 What can I say: I love this comic. Check out those free online issues, order the paper copies, read, enjoy.