The profusion of “graphic novels” into the regular book market amounts to a full blown publishing fad. I’m often bothered by the publications I see released and the often poor quality of the results (that Howard Zinn adaptation being a great bad example that came my way). The impulse seems to be to create a “graphic novel” without a lot of regard to the appropriateness of the form for the content.

I picked up 08: A Graphic Diary of the Campaign Trail at a bookstore (kudos to them that I found it in the political section and not the comics section), partially expecting a disaster, partially hoping it would be a really interesting use of the form for non-fictional reporting. At first glance, the visuals in the book are something different, which also piqued my curiosity.

Having read this twice, my first question is: Who is the intended audience?

The book purports to be a “diary” of the “campaign trail,” which would lead one to believe this is first person reportage of one of the reporters who followed a candidate’s campaign around (I think of David Foster Wallace’s Rolling Stone article on the McCain campaign in 2000). Sadly, the book’s subtitle is misleading. 08 is more like a sound and video bite timeline. After a brief prologue in 2006, the book starts in 2007 and continues through to election day 2008. Candidates are introduced, campaigns are run, primaries are held, conventions occur, then the election, all in a telegraphic series of images and text. The narrative comes quick and doesn’t let up. Little time is spent for any analysis.

What makes me question the intended audience is the way details are glossed over and parts of the events are referenced so obliquely that only someone who had already followed the campaign would know what was going on. One panel references “the Obama people had seen at the 2004 convention,” without providing any context to Obama’s activities at that earlier convention. An earlier sequence which zooms through Obama’s biography fails to mention that speech in 2004 which garnered national attention for him (and would have given context for the previous quote). Examples of these too abbreviated events are numerous. One such is a reference to the 3:00am phone call ads run by Clinton during the primaries: 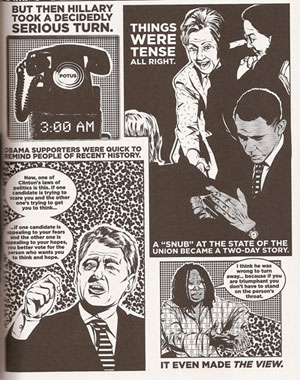 Without already knowing about those ads and their context, the first panel above would be completely meaningless. This example provides another good example of a problem with the book, confusing layouts. How am I to read this sequence of panels? From the telephone panel, I move to the adjacent panel and read the text at the top. I look at the image, moving down from Clinton to Obama, then the text at the bottom of the panel. From here it’s natural to move on to the image of Whoopie Goldberg. One is lead to skip the panel of former President Clinton, which actually works as a follow-up to the telephone panel. The way that large black panel hooks around the former President one makes it seem like one should read horizontally from telephone to “snub”, when it seems Goldman intends for us to read vertically down. 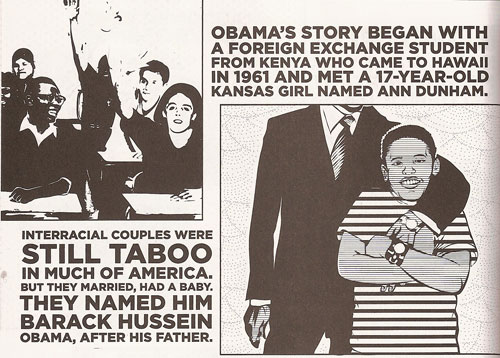 Here’s another example from earlier in the book. One interesting formal element of the book is its use of text as panels unto themselves, or at least as visually separate from accompanying images. Instead of narrative in boxes in the panel, the narration sits directly on the page next to, above, or below the image. In the sequence above, the text and image groups together visually in two vertical sections: image of classroom with “still taboo” text and image of young Obama with “Obama’s story began” text. Both times through this book I read the page that way before realizing that the narrative should actually be read from classroom image to “Obama’s story began” then “still taboo” to young Obama. When I, an experienced comics read, find numerous pages where I’m reading pages multiple times to find the right path, then clearly there are problems.

The two examples also demonstrate the style of the art. Goldman seems rely exclusively on photo references for the work, often (the classroom image above) using what I assume are photoshopped photographs directly. The drawn figures are often stiff, though that is not particularly unrealistic considering most politicians and the situations we see them in (speeches, interviews). For the most part, Goldman successfully keeps the characters easy to identify, relying on small text captions when new characters are shown but not introduced. The faces do take on an occasional grotesque twist, particular McCain and Clinton (some kind of bias showing?). 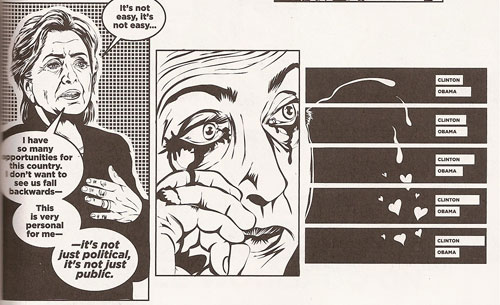 Some interesting visuals make their way into the work, a hint at Goldman’s visual flare (which is more prominent in his online work “Kelly.”) For instance, the above panels concerning the Clinton crying on television incident. The last part of this sequence shows a nice sense of whimsy yet also clearly shows the effects (temporary though they were) of the events.

The book is primarily a work of text and talking heads/bodies. Backgrounds are limited, photoshopped images or iconic objects. For the majority of the panels, the space around/behind the characters are filled with different textures (again see above) which add a strange atmosphere to the book but also points back to what must have been the quick turnaround on the artwork to get this out so close after election day (and before inauguration day?). I don’t know how long the authors were working on this book, but I wonder if its failings are the results of speed, a lack of time to refine.

A case in point is the attempt to inject two fictional reporters into the book. They are introduced at the end of the 2006 prologue as “our reporters” then don’t appear again for many pages. On the whole, “our reporters” pop up occasionally to offer quips and brief, often pointless, comments. No attempt is made to characterize them, to give them any life or even situate them in relation to the ongoing stream of images and words. They appear, they quip, they disappear. With the profusion of other, real reporters shown during the course of the book, one wonders why these characters were added at all. Or, when they were added, why they weren’t put to use to provide a greater sense of context and analysis (like a real reporter might do).

As I noted before, the use of text is a bit unusual. Almost all the narration appears as blocks of justified text using varying sizes of the same font. While the use of larger text could be used to emphasize words (like old Marvel comics with excessive bold words), in this case the effect seems to be use more as a way to keep the text in correctly sized blocks rather than to emphasize. The often blaring text reads like an advertisement of a billboard.

In fact, the work as a whole has an advertisement, news crawl, billboard, mass media type appearance and feel. This book is not for political junkies of even the mildest strain, as it will be too general and lacking in analysis, while it’s also not for the politically ignorant, as much of the context is shorn away, too much existing knowledge is expected. I’m not sure who it’s for, and I think that’s a big problem.