Posts following up on my best of 2007 list seems to be the theme lately. Back in 2006, I listed Cold Heat 1 and Cold Heat 2 on my favorites list, and last year I included issues 3 and 4. Unfortunately, the serialization model wasn’t working, so the pamphlets were cancelled and I now await the full work as a single volume (coming later this year). While he finishes up the book, Frank Santoro has been collaborating with other artists to produce a series of Cold Heat Specials. Two have come out so far, and he just announced two more for MoCCA 2008 (in collaboration with Ryan Cecil Smith and Jim Rugg).

I mentioned D&D in my post on Maggots, and I find myself drawing on that as a touchstone here. One odder aspect of the old D&D was the “random encounter” tables. The idea being that between other adventures, perhaps just while walking down the road between two towns, the heroes might randomly run into all sorts of things. One ended up with brief actions that bore little direct relation to the greater stories/adventures being told/played. I see the Cold Heat Specials in that same light. Both of the two specials now out show the protagonist of Cold Heat, Castle, involved in a brief unmoored encounter with… well, fantastical events.

The first special is co-written and drawn by Jon Vermilyea with plot and layouts by Santoro. It’s a black and white tabloid newsprint comic of 16 pages. The story is minimal: Castle, out walking in the woods, is attacked by some kind of amorphous serpentine ghost monster; it breaks her walkman and, inspired by the favorite singer from Chocolate Gun, she fights back and defeats the creature before going home. It’s a diversionary work.

I’ve only previously seen Vermilyea’s work in a few online images of his series of He-Man screenprints (which you can see at his website). Those images have a similar style to that seen here, and really show off how much his use of color makes his line drawings pop (as evidenced by the striking silkscreened cover to the limited edition version of this special). The drawings aren’t spectacular but they are certainly up for the job. His characters are cartoony (someday I’ll have a better way to say that), and the art has a certain lightness to it that might have more power with a better use of blacks (or some color usage in the vein of the Cold Heat series). The panels are not crowded but neither are they sparse. The pages never have more than four panels and the space is well used. Quite a few of the panel compositions/breakdowns are subtle and well executed for narrative effect. I jotted down these notes as I read through:

Opens with large, open, quiet panels: peaceful woods and isolation. A landscape panel of a factory and a train bridge that is very Storeyville. Nice subjective panel of feet, with train passing far below at the bottom of a ridge. Silence. A panel of what Francois Jost would call “spectatorial ocularization”: we see what the character cannot, creating suspense. We see a monster behind Castle; she turns and it is gone. When the monster appears again it is in a panel where we see Castle seeing the monster’s hand on her shoulder, a kind of reflective pov shot. A big panel with Castle dwarfed by monsters. Monsters from above, then Castle in the bottom panel ducking–the panel movement echoes her movement. A well broken down hiding moment: panel 1) castle running, panel 2) a tree, no sign of castle, panels 3/4) split panel with monster then Castle behind tree. Panel 2 replicates her hiding, she is hidden from us. A monster pov shot behind Castle (as she spies on another monster), then her turning to see.

The comics uses a lot of subjective and pseudo-subjective points of view for both Castle and the monster (we could call this “internal ocularization,” which I’ve written a forthcoming article on). While most of these panels are internal to Castle, a few, during the chase/fight, are internal to the monster. This creates a heightened sense of the back and forth between chaser and chased, and the effect works well with the wooded setting. All these formal elements give an extra punch to what is otherwise a rather banal story.

Cold Heat Special #3 is physically quite a different comic: a quarter the size of special #1, printed on white paper in landscape format with a blue and purple cover. This time Dash Shaw co-writes and finishes Santoro’s layouts. I’m a big fan of Shaw’s work (see my review of The Mother’s Mouth and don’t neglect to read his amazing webcomic BodyWorld) so the combo of Santoro and Shaw was a must read for me.

This story finds Castle riding the bus. The volume of the stop announcements bother her so she gets off the bus and finds herself in a forest (again? Some significance to that?) where a group of mounted knights run past/over her. She wanders back to the street where she left the bus, and it is deserted but for a few deer. It’s a strange little story, dreamlike, where Castle is more an observer than an actor (unlike the previous special).

The panels are numbered starting with the section page and ending at #28, with four panels remaining. I can’t quite figure out why. Dynamic use of text in a scene where Castle is on the bus. Across six panels, the announcements are visualized 5 different ways, slowly gaining in emphasis, causing Castle increasing pain by the volume. One panel is silent and spare, mostly white, showing Castle, expectantly holding her hands near her ears. The following panel shifts to a close-up of her hand, the background greys out and the text is written out in white negative space on the gray.

Three panels have an interesting circle composition to them, which is hard to explain. More use of textual descriptions (“trips. falls”) that I’ve pointed out in Santoro’s work before. In the forest the trees look like cloud cover, an ominous effect. Panel 25/26 is divided diagonally by a grey tone and shows Castle twice, creating a dreamlike sense of simultaneity. Similarly one long panel that is numbered 27 and 28.

(Cover and middle spread. Both are cut off, since it’s too long for my scanner.)

It took me forever to notice this, but just now (literally as I wrote that last sentence) I realized that the cover of this mini is a kind of alternate view to the long two-page image that is at the center of the mini. The cover is excellent, by the way, making great use of multi-colored layering.

Cold Heat Special #3 is less conventional, narratively and visually, than #1 and ends up being a more interesting read for it. Though I’ll admit that the narrative remains an open question for me even after a few readings.

Related to the Cold Heat Specials is Chris Cornwell’s The Chunky Gnars: A Chocolate Gun Tribute, a kind of fan fiction Cold Heat mini. It is a solo work by Cornwell, though I’m told it will be reprinted as Cold Heat Special #2. Cornwell’s mini shares a narrative similarity to Special #3, but it is less mysterious and more vulgar. I don’t share it’s sense of humor, so it is hard for me to make any judgements. Cornwell does change his style around a few times during the comic, making for some sequences that are, even out of context, rather attractive. Such as this strange page that is predominantly abstract marks. I haven’t a clue how those first five panels relate to anything else in the mini (though perhaps it is meant to represent the music, since the last panel has the musician seemingly ending a set), but they have a real aesthetic beauty, marred only by that last panel of a man with a fish on his head. 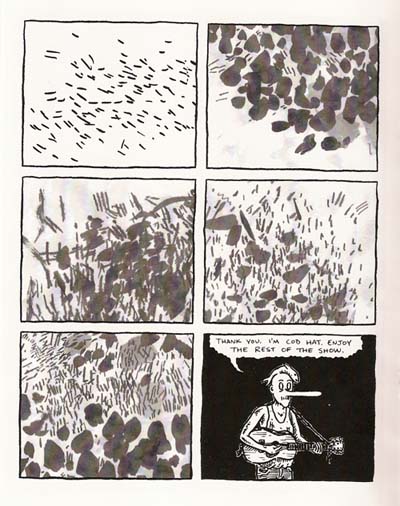 You can get Cold Heat Specials #1 and #3 from Picturebox. Chunky Gnars is available online from Copacetic Comics (this specific page). Speaking of which, I was in Pittsburgh in April. If you are in the city, you owe it to yourself to visit Copacetic. One of the best comics stores I’ve been in, owner Bill, has an amazing selection of comics and the knowledge to recommend excellent work (he got me to purchase some Peter Blegvad, which I have really enjoyed).

(Edit 6/3/08: Chris Cornwell writes in: “My cold heat special WAS actually commissioned by Picturebox, and IS available through their website. It was not a bootleg piece of fan fiction on my part.”)