Issue two of this most unusual 12 issue series (I reviewed issue one here). The story continues as Castle, protagonist, discovers the dangerous side effects of her anti-depressant, and the Senator goes on a rampage trying to find his son’s killer.

I don’t have a lot to add to what I said in my review of the first issue, but I wanted to point out a couple panels. 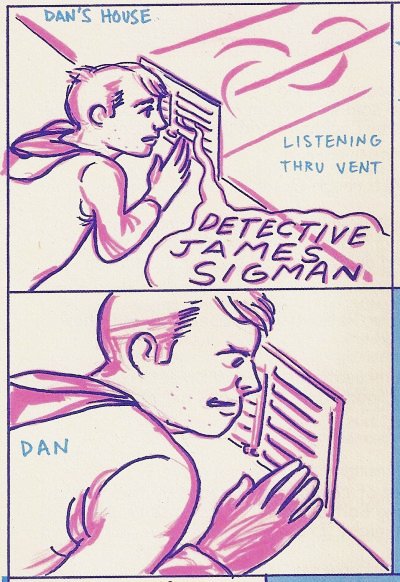 Here Santoro uses words in the image, not as a visual representation of sound (sound effects, spoken words) or thought (thought balloons), but as descriptive text. In a way this is an abbreviated, more integrated with the art, way of using narration. He could have used a narrative caption “At his house, Dan was listening at the vent…” Instead the panels are labeled: “Dan’s house”, “Listening thru (sic) vent”, and “Dan”. I find some of this text unnecessary, as the art does convey the listening, and we can assume that if it is Dan’s house, we are looking at Dan. Still, it’s an interesting use of text we don’t see much (John Porcellino does something similar which I mentioned in this post).

I just love the expressiveness of these two panels. Castle has just crushed and snorted her anti-depressants. These two panels have a back and forth motion, the first dynamic with movement, the second almost glacially slow and dark. And how about that blue on her face? Wonderful. 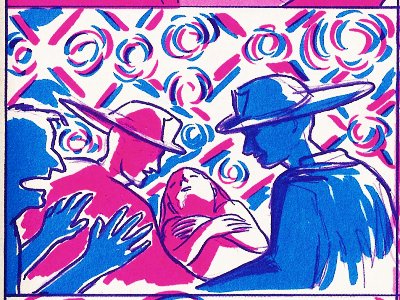 Firemen get Castle after an overdose (just following the previous panels). The abstract shapes in the back so clearly illustrate the flashing lights of emergency vehicles, more impressionistic than realistic, but completely readable and effective (even moreso in context of the rest of the panels).

This should be coming through Diamond to comics stores in the near future, with the rest of the issues to follow monthly starting in the new year. This series is going on my best of the year list.