I read most comics with some kind of context. Often I know the artist’s work or the publisher has a familiar style. Sometimes just the cover or the blurb on the back is enough. In the case of Frédéric Coché’s The Hero’s Life and Death Triumphant, I had nothing. I’ve not read anything by the artist. The publisher, Belgium’s Bries, is familiar enough to me to know only that the book will be something different. The book itself provides no description of itself or the artist.

The cover shows a group of figures surrounding a ladder (which disappears into the sky) on which stands a man lowering a body (wrapped like a mummy) down (or is he lifting him up). From the dress of the women to the accoutrements of the soldiers, the figures look like they’ve come out of a painting from the middle ages. The whole thing has the appearance of a religious icon, which I didn’t think of when first looking at the book, but now it makes sense. This is the hero, wrapped in bandages, ascending? descending? One can’t really tell. Like much of this book, ambiguity leaves interpretation to the reader.

The books is divided into 15 chapters. While the first two are labeled “Chapter 1” and “Chapter 2”, the rest of the numbered sections are labelled with architectural parts: “column”, “bas relief, main entrance, fragment”, “tympan, fragment”, “amendment cartouche”, etc. Chapter 2 shows three diagrams/maps of what looks to be a tomb of some sort, and the chapters that follow seem to bear some relation. The fragmented story told in each section act as parts of an archaeological excavation of the hero’s life and death.

The whole book is done in etchings: one page per print. The appearance of these pages with their darkened edges, grayed out whites, and scratches and scrapes, creates a feeling of age that thematically resonates with the content. Etchings are rarely clean, they look used, occasionally etched deeply to create a jagged black line. The pages are beautiful pieces in themselves. Etching can be a time consuming and labor heavy process (I used to do them in art school), and Coché has made a successful work from them.

The etchings are divided into panels, most often only two or three, and are completely devoid of words. The only words in the whole piece are the chapter headings and titles. In fact these are the only words in the book except for its publication information. With such a paucity of words, one clings to them for interpretative clues, trying to match the heading to the content that follows. How is one to understand: “Tympan, / Fragment / 7 / The Hunt for the White S. / First Taste of Bouillon / and Alarm in the Geometric Stadium”? The “White S” is a stag that appears as the object of a hunt. But the bouillon is not obvious, nor what the “geometric stadium” refers to. The whole book is a process of trying to reconcile text and image in each section and among the sections.

The drawing in the etchings has an interesting quality of detail and emptiness. The figures are realisticall rendered but often exist only as outlines. Backgrounds are at once detailed in appearance and minimally spread across the panel. Many of the panels are mostly empty, which adds to the often symbolic reading of the images. 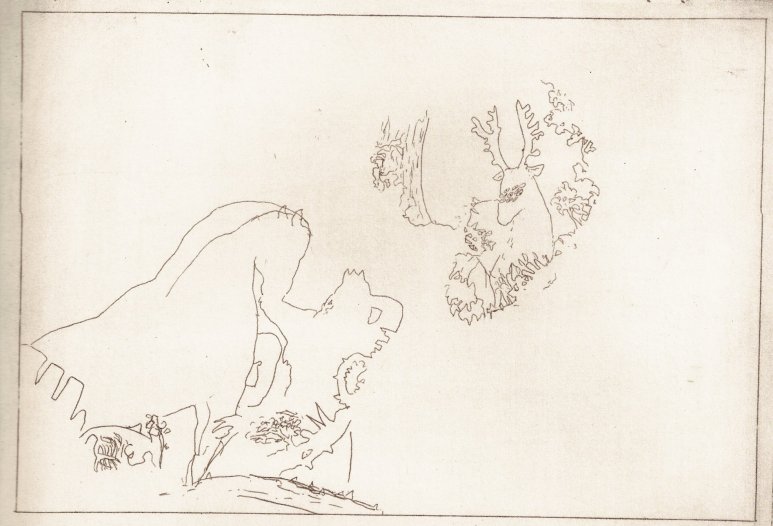 The queen is directed to the hero by a white stag (who has a large number of eyes). (Click for larger)

The main character in the book is a child-size cyclops wrapped in bandages like a mummy. That he is mostly a passive observer/participant in the scenes makes me question his status as the “hero” of the title. He does not appear in all the sections, but the ending of the book makes me believe he is the hero. That said, one could find other possible heroes throughout the pages. This mummy cyclops is perhaps a commentary on the “hero.” Is the idea of a hero a dead concept that continues to live? In this book, none of the possible heroes come to any good end, just death, often horribly so. 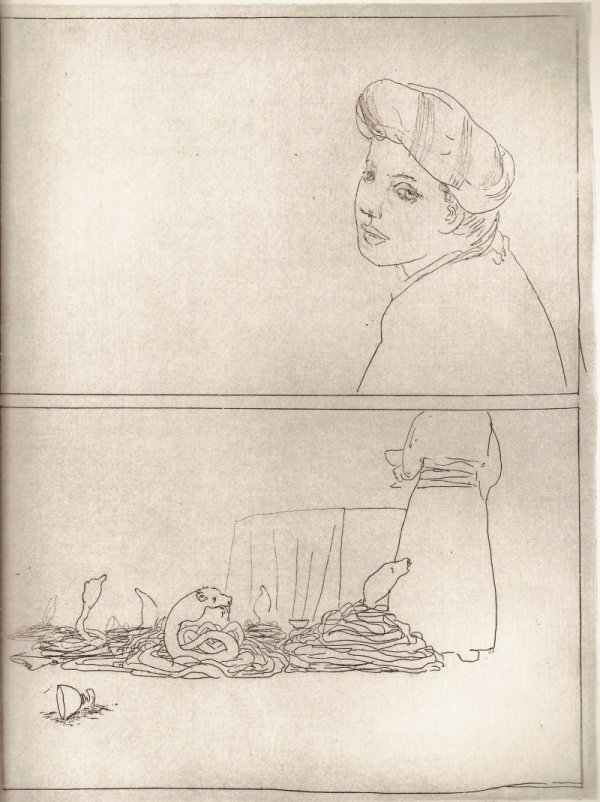 The book mostly exists in a kind of Arthurian setting of castles, hunts, monsters, and kings – the classic heroic setting – but as it progresses the setting shifts. There are some sequences that look more like the Age of Exploration (again, a “heroic” time), and one scene where the hero wonders into the trenches of World War I. I want to read this as a historic progression of the hero. My reading of the book has been changing with each reading I do and each time I start to write something about it.

In a way The Hero’s Life and Death Triumphant is like a poem. It reminds me of the beginning of Pound’s Cantos, where he appropriates Ulysses/Odysseus. It is open to interpretation; it is rich with symbols. Few comics have both the richness of interpretation and spareness of content of this book. I know it is a book I will return to in the future.

In a brief interview at the site of the French publisher of the book Fremok, Coché explains some of his thinking behind the book:

There is the hero, a little character who is embalmed and wrapped in bandages by his parents and the society which surrounds him. This is the little me with a small “m”. This little me is aware of two things: around him, and no doubt in him, before the embalming, a foaming, a swarming of which each particle doesn’t stop wanting to take all the space. Eros unbridled.

But, he was embalmed. That is, he was cleaned. All that swarmed was secluded. He was put in a tomb, which is the place of ultimate resistance to corruption: the geometrically cut stone could be submerged by nature. Et in Arcadia, ego: Me, the tomb, I remain, even in Arcadia. Even in the middle of the swarming jungle I endure. Geometry is the instrument of ultimate struggle against the entropy of life. The father of the hero is a king (like all fathers). And this king, like all the kinds, struggles against entropy. Against change and dispersion. The struggle against what is natural is titanic, even for a king.

Therefore the hero, small “h”, who is torn in an opposition which overwhelms him: swarming Life which pervades and geometric Death which prolongs. Who will triumph? The agreement is forced by the feminine, because the hero isn’t concerned with the triumph of one or the other of the entities which confront him. For attention, one of the two could, at each moment, triumph.

Between my translation and the original it’s a little abstract. But it’s a start.