I have not so far been moved by the works of Ben Jones (of Paper Rad) that I’ve read in various places, but Frank Santoro has so impressed me with his work that at this point I’ll pick up anything he’s doing, including this 12 issue monthly series. Both creators are credited as “storytellers”, though it is clear Santoro provides the art, and Aaron Cometbus does the lettering (how he ended up on this project, I am much curious).

The protagonist of the story is Castle a young woman who lives with her father and as the story opens has just lost her internship at a company. She discovers the singer from her favorite bad killed himself and goes to a party to mourn (or celebrate) the death. A rich young man dies and she goes to a ninja class. That’s the basic outline, though there is more going on. At this point, one is hard pressed to say much about the story. It is a set-up issue. The publisher copy offers “a life altering adventure through Prozac, corporate rock, globalization, and, of course, sex.”

Once again Santoro’s visuals shine. The art is all in pink, blue, and purple. It looks to have been drawn with ink and colored pencil. Purple lines are the predominant lines while the pink and blue are used as flat colors or in a textured pencil like manner. Unlike most comics that use a black line that is filled with color, here, while the purple line is predominant, the pink and blue are also used to delineate objects and characters, often as a background element, sometimes on top of a lighter transparency of the same color. (See the blue area in the sample page for a good example of blue linework on a blue field.)

The whole comic has an ethereal feel to it. Open aired and lacking ground. The characters are rarely placed in distinct places, rarely anchored to anything at all. They float on the page or are sharply cropped. Backgrounds mark off doorways, windows, rooftops, and stairs along with the occasional minimally rendered object. This sense of ethereality is only added to by the lack of conventional panel borders. Instead of borders most of the pages have alternating uses of color fields to delineate panels (again see the example page). 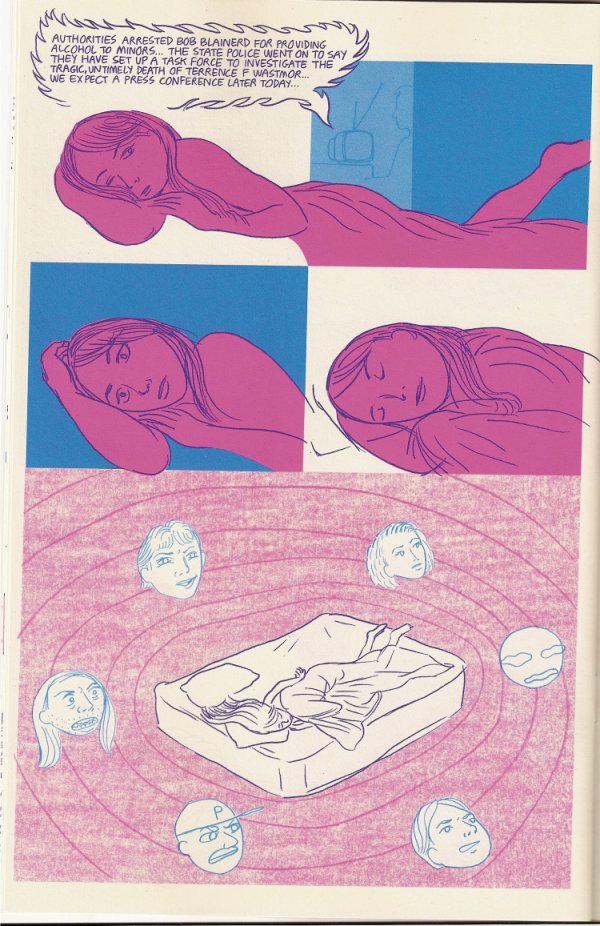 The story required some close reading to follow clearly. I ended up reading it numerous times, and I’m excited to see what follows (though I will remain skeptical on the “ninja” aspect). If you’re looking for something different, very different, you might want to give this a try.