Day Four of the Panel Madness Week blogaround arrives. The previous post is up at The Fortress of Fortitude where the Keeper writes about a panel from Challengers of the Unknown #2 by Dave Wood and Jack Kirby.

Certain works have had lasting impact on the way I read and create comics. David Mazzucchelli’s Rubber Blanket is one of those seminal works I discovered while still rather young (I was 16 when the last issue, three, came out). The large format (9″ x 12″), the loose brush work, and the limited colors are still unusual, but at the time they were an amazement to me. In particular, the story “Discovering America” in issue two had a strong visual impact, which is why I picked a panel from this story for this project. Page thirty-eight is a single large splash page, both a page and a panel at the same time. This is not the first in the story, which also includes a two-page splash, but it is the most dynamic one.

The story, briefly, follows a young man named Chris who is obsessed with a large globe which he is attempting to build, to fix the land, water, and countries, into a stable order. The illusion of geography and stability, abstracted systems and concrete reality, are mirrored in his work and a relationship he develops with a woman who lives across the street (he first sees into her window from the window of his workshop).

Page thirty-seven is a quite stable page holding many rectangular panels, showing Chris working with a Mercator map (that is a projection of the globe onto a rectangle). He draws off the map, continuing the longitudinal lines off the page. In the last panel he is marking off the North Pole, here, because of the nature of the Mercator, found at a dozen locations in a line across the top of the map. A reader turning the page moves from this calm, wordy page of stable, enclosed panels to page thirty-eight.. 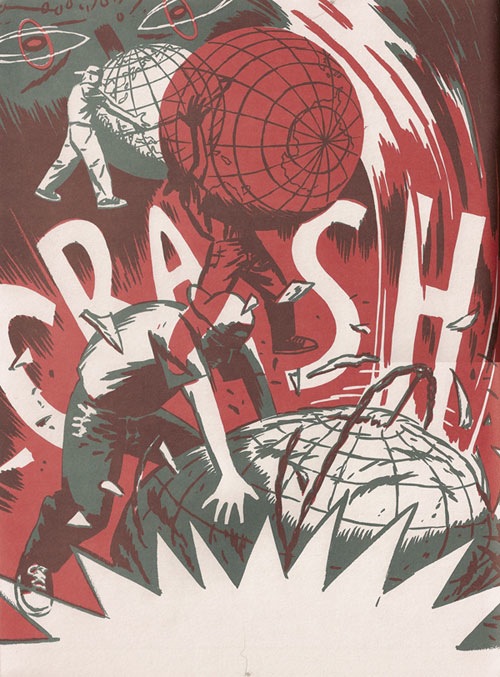 …an explosion of movement and large forms which bleed off the edge of the page and even, at the bottom, onto the facing page. This is the climax of the story, which ends two pages later. This is the point where everything breaks apart. Even the previous splash pages were much more ordered, geometric, and calm, where this one is motion and curves. The contrast is striking and apt, a merging of the visual image and the narrative content.

As an overall composition, the page has a distinct movement downward. The reader’s eye naturally starts at the upper left corner and the whole image is organized to move the eye down the page in an arc to the white bottom margin. The primary shapes of the page are circles in the form of the globe, shown twice as a circle and a third time degraded, flattened, and cut off, a misshapen oval. The flattened circle is prefigured in the eyes which top the page. The circles and ovals grow larger in relation to their placement towards the bottom the page, creating a sense of depth and forward movement. The background brushwork also contributes to the movement: it moves in a curve along with the arc of the circles.

The eyes that start the page are abstracted into a series of differently toned ovals, with orange pupils and orange vertical ovals adding the feeling of anger and perhaps a bit of craziness. This is anticipated a bit by the penultimate panel of page thirty-seven: a close-up on Chris’ face, his eyes widening, sweat forming on his brow. Here, on page thirty-eight, the anger has come on full bore. The vertical ovals not only add a certain craziness to the eyes, but they also give to the pupils the appearance of a ringed planet (like Saturn), which is a nice complement to the globes and a subtle distancing of Chris from his work. The darkened face with eyes outlined in white also gives the face a somber countenance. Even the unclosed, imprecise, white line of the eye adds a bit of destabilization to the face. The dark smear of the bridge of the nose leads right into the first figure.

This panel page is one of multiple moments. Mazzucchelli could have drawn this as three or four (or more) panels, but instead he put them all together, overlapping. The strategy is effective here. It keeps the focus on the figure and the globe by repeating both three times. It creates a greater sense of movement through that repetition. And, as I noted before, by sheer size it works as a climactic moment.

Neil Cohn might call this a polymorphic panel because it shows multiple instances/moments of the same action within a single panel[1]. Most examples of this type of panel show a moving action through a background, such as the Jim Steranko panel (Strange Tales 168) below[2]. In this case, Mazzucchelli is showing a different type of action. We do not get the feeling that Chris is carrying his globe through a background to smash it, rather his lifting it up–in previous pages it is suspended in some way with a chain structure (you can see part of that on the last instance of the globe in this page)–and throwing it down. This is more like a series of staggered, overlapping panels, than the filmic/animation style of the Steranko panel, where the space on the page is also the space in the scene. 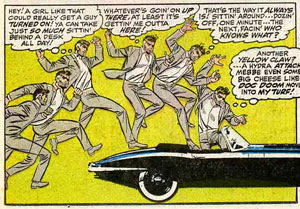 A panel from Strange Tales 168 by Jim Steranko

Mazzucchelli’s figures here are powerfully rendered. Each is, in varying degrees, off-balance as it struggles with the large globe. The middle figure looks like it is straining. You can see the weight. The left leg sticks out under the center of the globe, while the right leg seems to almost stagger out past the head. The area from the bottom of the globe down to the shadowed left leg and foot sits at the center of the page (almost exactly). The shadow of the left leg is immediately adjacent to the shadowed face, chest, and downward/forward pointing limbs of the third figure. This area is a moment of brief stability at the center of the page before the globe comes crashing down immediately afterward. Also take note of the position of the globe here. The first and second iterations of the globe stay at mostly the same level vertically. There is then a precipitous drop to the third globe emphasizing the quicker movement of the downward motion while minimizing and slowing the lifting motion.

Speaking of shadows and tone brings me to the part of this comic as a whole that continues to impress me: the colors. What is important to understand about this comic is that it is printed with only two colors: orange and blue (my scan does not do justice to the colors, which are brighter in the original). Both (or at least one, whichever is printed on top) are to some extent transparent, allowing a third tone to be created as a result of the orange and blue overlapping. Mazzucchelli covers enough of the paper with the colors in this page (and many of the others in the story) that he also gains white as a color rather than just the lack of color.

When I first read Rubber Blanket, the use of color was unlike anything I’d seen before. Pretty much all the comics I had read to that point were Marvel/DC pamphlets with their black lines and filled in colors or independents (and early translated manga) in black and white with occasional grey tones. Here was Mazzucchelli with no black lines and no filled in colors. He had two different colors and he drew with each (note how the face at the top is rendered with the orange color, while the figures are mostly rendered with the blue). He calculated when the colors would sit along side each other and when they would overlap to create that third darker tone. The effect is beautiful and endlessly fascinating to examine. I have to attribute my ongoing love of blue and orange as a color scheme to this work[3]. My attempts to recreate this in my own comics have been much less successful.

The figures in this page alternate their primary color: blue, orange, blue. The central orange figure and the orange field on which it sits, recalls the orange circles on the eyes, creating a central field of heightened anger and emotion before the cooling release of the third figure and the bottom of the page. Note the right leg of the middle figure; as it overlaps with the bottom figure, it becomes a simple silhouette overlapped by the blue which delineates the bottom figure.

The white in the upper right part of the page allows the orange globe to retain its shape against the background, an additional arc carrying the composition downward. The jagged white star-burst shape at the bottom of the page gains focus because of the darkness at the top of the page; it’s almost like an explosion going off the page. The only apparent margin on the page is not blank space at all but a white colored part of the image. This star-burst also pushes across the gutter onto the facing page.

The only text here is the “CRASH” sound effect which cuts across the center of the page. Once again, like other elements, the word contributes to the downward motion of the composition through the placement of the letters on an arc. The white of the letters in conjunction with the white of the star-burst create a sense of the effect radiating out from the bottom of the page. This effect is increased by the tiny bits of white paper that seem to have flown off the smashed globe. The crash, the papers, simultaneously go along with and against the downward movement of the page. We see them as we read down the page, but in the world of the comic (the diegesis) their movement is up from the ground/bottom.

Having gone this far, I shouldn’t fail to mention the lovely brushwork at play here. From thin consistent lines to thick and chunky marks, Mazzucchelli offers a virtuoso execution. The feather marks add a texture and more movement to the colors and shapes. We can see this most obviously in the swath of background that cuts across the upper half of the page (blue feathered marks on orange), but we also see in the marks across the chest of the third figure, which highlights the curve of his bottom as he brings the globe down.

I have had great pleasure returning to this work from a time of booming independent comics, a high quality self-published work, which I found in a regular old comic book store mostly devoted to superheroes. Unfortunately for you, the reader of this post, Rubber Blanket is long out of print and sells for high prices online. Mazzucchelli has a new book, Asterios Polyp, coming out in June of this year. Maybe it will spark enough interest to reprint some of these older works.

Thanks to Bill of A Trout in the Milk for planning this blog-around. Tomorrow’s blogaround post will be up at Sean Witzke’s Supervillain.

[2] Another famous example from Steranko shows Captain America tumbling across a room. Unfortunately, I couldn’t find an image of this panel (I want to say there is a reproduction in R.C Harvey’s Art of the Comic Book).

[3] See my previous webcomic Maroon, as well as some sections of Things Change.