Storeyville by Frank Santoro. 2005. 40p., tabloid size newsprint, 3 color. Out of print and apparently kind of rare. You might still get a copy here (it’s where I got mine).

Having already twice raved about Frank Santoro’s work, it should not be a surprise to you, kind reader, that I will now rave about this, his earliest comic, Storeyville. I tracked this down at the one place it seems to be available and I am glad to have done so. This is a marvelous work, different than Chimera or Incanto, more narrative, more conventional, but still beautifully drawn.

Storeyville takes place in what I imagine is the Depression era. The protagonist, Will, is a hobo who starts out the story in Pittsburgh. After a meeting with an old acquaintance he travels to Montreal to track down his old friend Reverend Rudy. He and the Reverend were once close friends who lost contact with each other after a motorcycle (“horseless carriage” which tells you a little by way of time period) accident while being chased by the law. Rudy, having been injured, convinces Will to flee. Will still feels guilty about the incident and, in his shiftless life, feels that if he finds Rudy he will once again be on some kind of path. Will does find Rudy working as a first mate on a boat docked in Montreal. They converse and Rudy convinces Will to go about his life.

With Will’s search for forgiveness and direction from the “Reverend” (no explanation if Rudy is a real preacher of some kind), one can easily read a religious theme into the story. Though, there is little more to be said on that account, as in the end, Will is convinced to go about his life with the Reverend. There is little more to the story, an interesting but not particularly great narrative.

Santoro’s drawing and the way he alters it during the story is the part of this comic that really impresses.. He wields a variety of tools and styles that all meld perfectly. When the story begins in Pittsburgh, he uses a lot of drawings that have the air of being sketches from life or at least photo reference. The landscape and architecture are distinctive, detailed, and delightful. The strong sense of place that is evoked throughout the comic is in sharp contrast to the ethereal settings of Chimera or Incanto. Here, place is as important an part of the story as character. These drawings are not background images, but full-fledged foci of the panels. 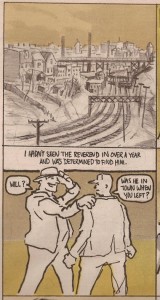 Here we see the contrast between a pencilled, realist cityscape and inked simplified figures. (Sorry, colors are a little washed out in my scans.)

In contrast to the realistic looking settings, the characters are much more abstract. Santoro alters the level of abstraction and detail as needed for differing effects, occasionally veering into sketchy figures that look more like the structures on which a drawing would be built than an actual drawing itself. These abstracted figures hold an impressive amount of information and emotion in their postures and staging. The way Santoro draws his characters moving and interacting shows a real knowledge of how people really act.

An example of the very sketchy, structural figures.

Occasionally the realistic landscapes become abstract, almost completely abstract at times, particularly during the period where Jim hops trains between cities and in the later part of the story at the port and sea. 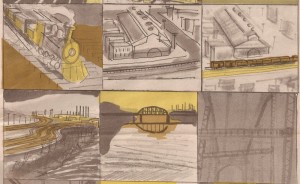 Click for a view of six panels. We can here see the multiple medias used as well as the way Santoro abstracts the art. In panels 2 and 3, we see the way the art changes style to change the focus. The buildings lose weight as the focus shifts to the arriving train.

The art is drawn with pencil and pen as well as washes of grey, yellow, and brown. The contrast between the pencils lines and the ink lines (or spot blacks) is well used, the pencils often serving to delineate objects at a distance, disappearing into the background, or even metaphorically at a distance (memory or thought). The yellow and brown washes are frequently used as abstract color fields in the backgrounds.

Every page is taken up by 15 square, gutterless panels. Santoro varies the pacing of these panels by using a wandering eye on the landscapes and scenes, particularly in the spaces between the conversation and action scenes. The use of these landscapes and settings show a narrative style that is rare in comics. These elements are usually relegated to backgrounds, theater dressing for the actions of the characters, but Santoro uses them as importance narrative elements in themselves, creating mood through these landscapes as well as thematically evoking Jim’s sense of displacement in the world.

Here we see some of the posing Santoro uses with his figures (particularly in the leftmost characters in each panel. We also see the way the pencil lines are contrasted with the ink lines to add detail and distance. (Click image for larger.)

Paging through Storeyville, looking for images to scan, I wanted to scan everything. This is one of the most visually attractive comics I’ve read all year. That Santoro stopped making comics for 10 years (or at least stopped publishing them) is a damn shame. It is so rare to see this kind of stylistic variety or even the slight range of media he uses (more than just ink). How about a reprint of this someone? A nice oversize reprint of this and Chimera would be awesome.

I need to end by mentioning the ending of the comic. The last two pages are spare and beautiful. The 15 panels that make up each page are here set to showing one (or is it two?) image. About three quarters of the way down the page a yellow field above is separated from a brown field below by a thin white stripe. The only thing to enter these two pages of color fields is a ship, sailing away, perfectly placed in the eleventh panel of the left page. It’s mast just peaking past the top border of that panel. It’s a beautiful, quiet, and open spread that ends the comic with both serenity and expansiveness.