I’m like a broken record when it comes to John Porcellino’s work: I love its beautiful minimalism and quiet, thoughtful narratives. A new long work by him is cause for celebration, and this volume does not disappoint. Thoreau at Walden is the latest volume in the Center for Cartoon Studies series of sort-of biographical comics. While previous volumes have seemed just slightly off narratively and a little too juvenile for my tastes, this volume is right on target. While previous author/subject pairings seemed like winners (Lutes on Houdini, following up his Jar of Fools on another magician; Sturm on Paige, following his baseball comics), John Porcellino writing on/with Henry David Thoreau is a perfect match for a comic that is meaningful for adults but also readable for a younger crowd. If you’re familiar with Porcellino’s work, his focus on quiet meditative experience and the natural world, is an obvious fit with Thoreau.

Thoreau at Walden focuses, as its title would indicate, on Thoreau’s experience living in a small shack on Walden pond, as described in Walden. Porcellino uses only text from Thoreau’s writing (admitting to minor editing and reorganization) to narrate the book, mostly from Walden itself but also from “Civil Disobedience” and his journals. By using only Thoreau’s words, Porcellino allows the reader to directly engage with his protagonist’s thoughts and writings, making the comic a kind of teaser work for Thoreau’s prose (it has got me wanting to reread Walden).

The narrative is divided into four parts (winter, spring, summer, fall) covering a year of Thoreau living in his shack outside of Concord, MA. Thoreau discusses his thoughts on conformity, his experiment in living simply both separate and still connected to civilization, his daily life at the pond, nature, and philosophy. Interspersed with these meditations are small vignettes from his life and the relatively longer story of his night in jail for refusing to pay his poll tax (famously described in “Civil Disobedience”). Porcellino effectively captures small moments of life, adding a visual warmth that is missing from the text. What emerges is the surprising relevance of Thoreau’s work to contemporary society and individuals, in regards not just to the environmentalism for which he is generally regarded a forefather but also to issues of simplicity, (non)conformity, and the individuals relation to society. Reading these ideas now (many many years after I read Walden late in my teen years) I can see how much his thoughts are forebears to so many movements and lifestyles in the twentieth century like the seemingly opposed hippies and punks.

The use of Thoreau’s actual words makes for an interesting reading experience. His syntax is so different than what one sees in comics or even most contemporary prose. The writing, in its structure, is rather dense even in the fragmented state found here, and the density of the writing contrasts with the minimalist style of Porcellino’s images. It forced me to give the text a closer attention than in most comics, occasionally finding the need to reread a page or sequence of pages more than once, so as to not lose the flow and meaning of the sentences in between panels. I wonder if this speaks to Thoreau’s 19th century prose or to some larger issue of prose style in comics.

Porcellino’s drawing style is as minimal as ever, the obvious difference from other recent works being the use of a warm tan as a second color. I’m not aware of any previous use of color (other than printing the linework in different colors in A Perfect Example) in Porcellino’s work, so it is interesting to see what he does with it. The color serves a few purposes throughout the book. The color often serves to create a greater sense of depth. Porcellino does not use linear perspective (or does only very rarely) nor does he vary line weight, so often his drawings appear flattened (see below), relying on placement and size to create the illusion of depth. With the addition of a color, different fields of a panel can be pushed back or pulled forward by applying the monochrome. 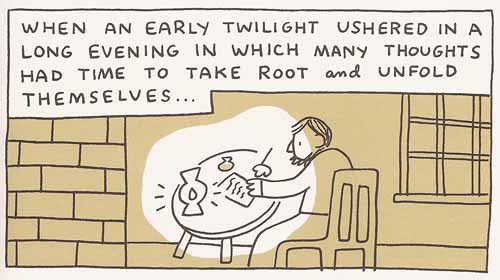 The color allows Porcellino to present light in certain situations, such as a nighttime scene or an image Thoreau sitting in front of his fireplace. The color is also used to create a focal point in the panel, sometimes in a very specific way (everything is tan except the white focal area, see above) elsewhere in a more general compositional sense. The color is a welcome and simple addition to Porcellino’s work. Less successful is the multicolored cover which move towards a more realistic (representational) color scheme and ends up being detrimental to the simple linework.

As always numerous simple and beautiful compositions are to be found both in individual panels and in pages or multipanel sequences. The image below is almost unbelievably simple, yet the placement of the lines and the white shapes are just perfect compositionally. 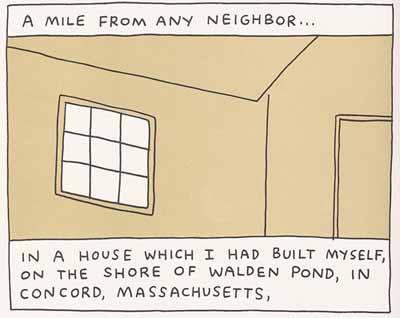 Similarly, the color in the sequence below shifts from day to night with a simple mirrored flip of the field. 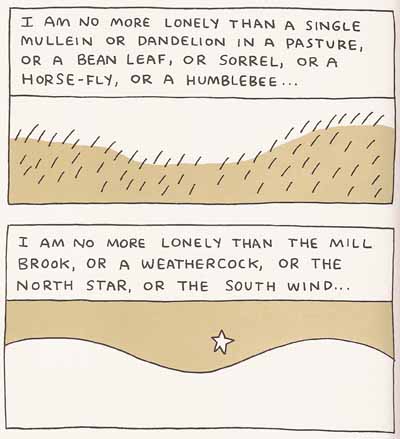 If you are fan of Porcellino’s work, this post was unnecessary, you’ve probably already bought this book or have it on your list. If you haven’t read Porcellino before this is probably the best place to start and should be the easiest of his works to find.

Bonus link: Porcellino on the genesis of the book.