I listed Brian Chippendale’s Ninja as one of my favorite comics of 2006. It was my first reading of a long work by Chippendale, my experience up to that point a few brief pages in an anthology here or there. Long ago I had Maggots on pre-order in its never released Highwater Books edition. Last year, the book was finally released by Picturebox. In a way, I’m glad it never came out from Highwater, as, at the time, I don’t think I would have had the same reaction to it. I’ve had it sitting on my “to blog” shelf for months now. The recent posts by Charles and Craig at Thought Balloonists (see this list of posts) got me to pull the book out and reread it.

Maggots is a tough book. In some ways, it feels more diaristic than most published comics, as if it were created with little (or no) thought for the reader. Chippendale clearly made the work with a sense of energy and exuberance (else, I can’t imagine the creation of all those tiny images and tight lines) and a general lack of what would be considered traditional narrative content.

I was recently reading Susan Sontag’s “Godard” (from Styles of Radical Will) and something she says about the films of Feuillade struck me as relevant to the case of Maggots:

“…the director has carried the melodramatic narrative to absurd extremes, so that the action takes on a hallucinatory quality. Of course, this degree of abstraction of realistic material into the logic of fantasy requires a generous use of ellipsis. If time patterns and space patterns and the abstract rhythms of action are to predominate, the action itself must be “obscure.” In one sense, such films clearly have stories–of the most direct, action-packed kind. But in another sense, that of the continuity and consistency and ultimate intelligibility of incidents, the story has no importance at all.” (161)

With a bit of tweaking for “comics” instead of film and “autobiography” instead of melodrama, this speaks to Maggots. The book has markers of autobiography, and a general sense of the everyday, though it is an everyday for a certain type of alternative lifestyle: the twin problems of not wanting to work but needing money, food, sex, listening to music, reading, shopping, art making, hanging out with friends, communal living. These elements are abstracted and transformed. A trip to Japan becomes a journey into a strange world with characters speaking in unintelligible words. The return flight becomes a kind of rocket ship voyage.

Part of the “logic of fantasy” and “obscure” action in Maggots is what I read as a kind of Dungeons & Dragons “dungeon crawl” milieu of dark corridors, trapdoors, secret passages, spatial confusion, random encounters, and mostly meaningless fighting. We might apply the term “mash-up”–as used for the combination of various web services into something new–to the book. This combination of diary with fantasy, a particular kind of fantasy, is an unusual and novel area (one that takes on a different, and more intelligible, cast in Ninja).

The protagonist of the book is called Hot Potato. Beyond him the only character I can clearly recall is his girlfriend/ex-girlfriend, Rabbit. Their relationship, apparently a long distance one, provides one of the few recurring lines of events, though it is mostly a series of actions separated by large ellipses.

In the end all the narrative elements do not create a consistent or coherent “story.” The diaristic aspect of the book is increased by this lack of a coherent through line. As if Chippendale were transforming and recording life events one after the other, excising any context to reality. I get the feeling this is a very personal book. So what does the reader gain from it? 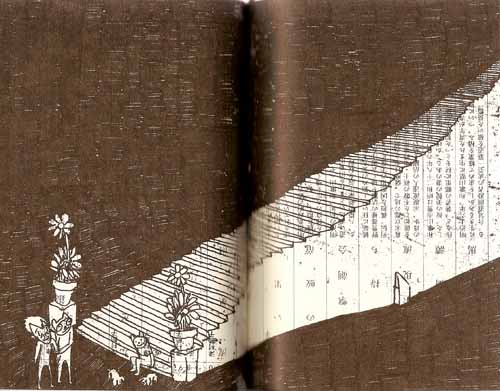 The primary interest is Chippendale’s visual flair: his dense pages, the dynamic mark marking, the unconventional panel ordering, and the Muybridge-esque attention to breaking down actions into a multitude of slightly altered images.

As has been discussed extensively elsewhere, Chippendale organizes his panels in a snaking motion, back and forth down one page and up the next. The instructions on the inside bookjacket flap warn against an easy complacency, “stay alert.” The reading experience is often confusing, where the “correct” order of reading is nigh impossible to decipher (if there even is a “correct” ordering). This adds to a sense of displacement (increasing that “dungeon crawl” aspect) and frustrates any easy reading, yet, the close, snaking nature of the panels combined with the crude style of the images increases the reader’s tendency to read quickly. Zipping through the pages, certain sequences look like a flipbook disassembled, such is the moment-to-moment actions of Chippendale’s breakdowns. The sense of movement in the tight tiny panels is increased by the way Chippendale parallels the direction of the dense background hatching to that of the actions. 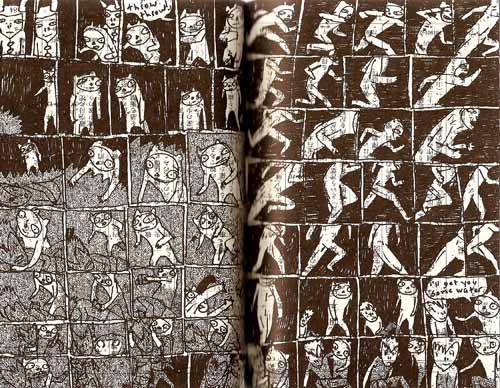 This book lopes along at a steady pace, slowed by a few short (often hard to read) word balloons, and the rare, but all the more affective for it, large panels. The sudden expansive panels (often full page images or two page spreads) are a breath of fresh air amongst the tight dark panels (like passing from a series of labyrinthine passages into a giant garden), offering a feeling of freedom and escape. 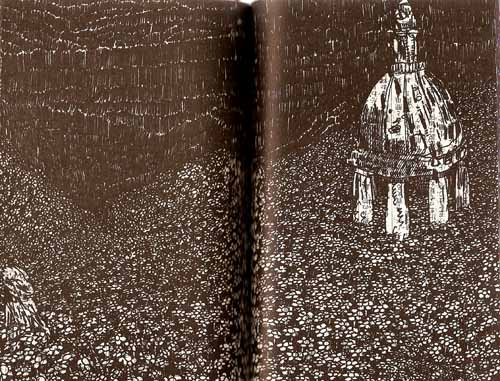 The speed of the book is also retarded by occasional pages of non-action. One such sequence that goes on for almost three pages (more than 65 panels) shows Hot Potato (I think it’s him?) sitting in a chair reading silently. This repetitious non-action in contrast with the frenetic movement of much of the book is a welcome respite, nicely creating an identification between reader and character as he rests. 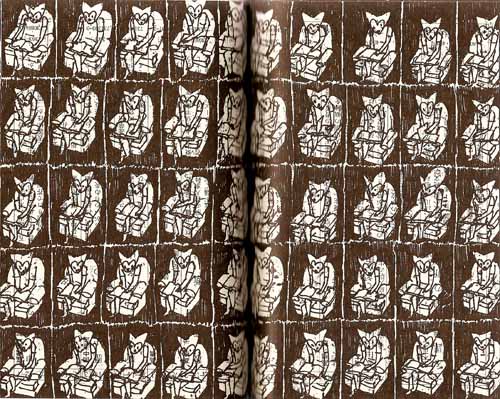 For the reader unfamiliar with Chippendale’s work I would not recommend Maggots. Ninja is a much more successful and mature work (despite the juvenilia which starts it), offering more conventional narrative pleasures, but also a greater sense of thamatic depth to the succession of events and a style that is more dynamic in its patterning, actions, and space. Maggots, while pointing towards a different sense of comics action and reading, ends up feeling more like a published sketchbook, a different experience.