Frank Santoro’s previous comic Chimera (my review) was a revelation to me. A beautiful surreal comic that I reread multiple times. Santoro creates comics that are not conventionally narrative. They are more akin to Surrealism and the Nouveau Roman in literature: fragmented, open to interpretation on even the basic level of plot, and unconcerned with the idea of characters.

Incanto is a small book printed in black, blue, and orange (my scans below do not adequately reproduce the brilliance of the orange). The drawings have a quick sketchy look to them, which is supported by the way the art seems to have been printed from a moleskine notebook. Almost every page’s art is in a rectangular frame with rounded corners on the right or left side (see the excerpts below).

I can probably give a better idea of the book’s content by describing scenes or moments rather than attempting a resume of any story: a first person view from the back of a horse; a figure pushes another to the ground; a woman grasps a man’s legs as if begging for the other figure to be spared; a vast sky and a mountainous landscape; two characters holding each other close; a vampiric figure grinning at a woman; two figures lying together. The fragments connect and blend but also refuse any simple linear explanation. The reader must fill in the gaps, not unlike McCloud’s “closure” but in a broader narrative sense, a more participative way.

Most comics narratives are quite concerned with a visual consistency to characters. Charlie Brown always has that same shirt. Superheroes always wear the same costume. Lapinot always has those same giant feet. Through this consistency the reader can connect panel one or page one with panel 4 or page 4. We see the same repeated character images and know that they represent the same concept. Santoro’s comic does not offer this sense of constancy. With his extremely bare lines and a general lack of delineated clothes or even faces, Santoro creates a sense of unease and uncertainty from one page to the next that is much like a dreamscape where forms change or people have one essence but another appearance. This flux of constancy is negated in different sequences by other kinds of repetitions: composition, color, action, etc, and this negation will last a page or two before once again everything changes and we are left with a new image and a new challenge in piecing together what came before with what comes after (very much like the nouveau roman). I should stress that it is not completely chaotic or random, there is clearly thought behind these images.

I mentioned the bare lines and minimalist rendering. The strict three color palette adds an extra dimension to this minimalism that not only adds depth to the representional work of the drawing–the colors helping to delineate objects or characters–but works as a compositional tool. The use of large color fields and the balancing of those fields between the four available colors (the three colors plus white) is a powerful visual aspect of the book’s two page spreads. 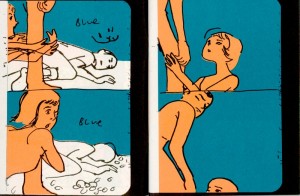 This first sample (that’s two pages together) is an excellent example of the way composition is used to create a sense of consistency in the figures. We can clearly see the progression of the woman from the left hand panels to the right hand panels even though she does not have many repeated identifiers (she appears bald on the bottom right panel). The panels also show the sense of movement found in many of these drawings: note the frenetic lines forming repeated arms/hands in the first panel. We also see the way the colors are used compositionally to create a rhythm and overall visual balance.

Another interesting aspect of the book, again adding to the sketchy quality, are the words written into the panels: “blue” in a blue field. In a later panel we see “Doorway + Rain” written below a panel that, even without the text (probably), can be parsed as a woman running out a doorway with run falling. 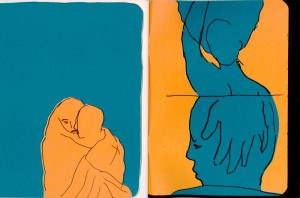 This second set of pages is mostly here because the image, the lines, and the composition are so striking and beautiful. Again, the balanced color fields. I am so jealous of these images, so minimal yet so powerfully felt.

The title of the book, Incanto, means “spell” or, figuratively, “delight” in Italian, and I can’t think of two more apt words for this work. Like a spell it is magical, dreamlike, and affective, and reading it fills me with delight at the imagery.

Santoro has quickly become one of my favorite comic artists. That he has a 12 issue series (Cold Heat from Picturebox, first issue review imminent) just starting is about as exciting a thing as I can think of right now as far as new comics. (I’ve also got his 1995 “Storeyville” comic to read too.)