The story, such as I can decipher it, involves a young couple. The beginning is perhaps a dream or a fantasy, erotic, mythic, and protean. The narrative becomes clearer when we see the young couple at the beach. The woman is swimming in the sea, the man lying on the beach. Perhaps he was fantasizing as he lay there? They go into a town. They are playful, obviously young and in love, though the man seems troubled by something that takes the form of a minotaur. The woman laughs it off. They go to the movies (Douglas Sirk’s There’s Always Tomorrow).

It’s not a lot of story, but Santoro’s style is impressive. The comic is printed in bright yellow, bubblegum pink, and black, which sounds unattractive but is perfect for the story. The two colors are odd, almost unnatural, and add to the otherworldly elements of the art. Santoro draws with simple lines and minimal detail that is highly reminiscent of the drawings and etchings of Picasso (particularly his myth series when a minotaur appears) and other fine artists like Rodin (his figure drawings) or Matisse. The dreamlike content of many of the images reminds me of De Chirico or Magritte, realistic elements that take on a surreal uncanniness due to their context or juxtaposition.

The earliest pages of the comic are mostly large images free of any conventional sequential narrative, two or three to a page, figures, objects, and landscapes: a man, doubled, looks over at a woman, also doubled; a large vase or urn juxtaposed with an archway through which one can see a puff of smoke; repeated images containing a house with smoke pouring from its upper story; sexual imagery of the man and woman, together or separate. A narrative sequence of more conventional panels shows a tree-filled landscape where the man spies the woman standing with a minotaur, who glares menacingly back at the man.

These early pages are abstract and mysterious, but they gain resonance and context through the latter pages, which contain more conventional panels and sequences. Even here, Santoro heightens surreality with his art. The simple lines and forms allow a blurring perceptual boundaries. Take the following two panel sequence. The previous two panels show us the woman floating in the sea and the man reclining on the shore.

The simplified art and limited colors increase the correspondence between the woman’s head and the large rock that rises from the sea. Or is it the sun? A few pages later as the couple rides on the subway the minotaur returns in a picture. 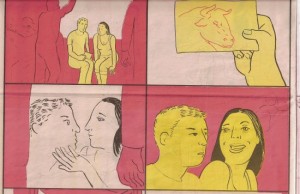 Note also the subtle shift of style in the panel where the couple appear on a background of white.

The indicia on the last page, defines “chimera” as “the dream beyond the dream.” A dictionary I have defines it as something wished for but impossible. This colors my view of the couple, instilling them with more sadness, less hope. Are they doomed to break?

I keep paging through the oversize newsprint pages, soaking in the art and the atmosphere Santoro created. Chimera is a beautiful and strange comic. I highly recommend it to anyone looking for something out of the ordinary and finely crafted, that retains mystery.