This page, from the third issue of Concrete by Paul Chadwick (or the first volume of the collected edition), came up on the Comix Scholars list this evening. In it we see 150 panels of Concrete swimming in the ocean, part of a story where he endeavors to swim the length of the Atlantic. 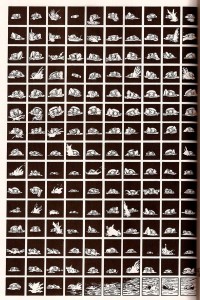 You don’t see many pages with that many panels. Chadwick can jam a lot onto this page because he is showing us a repetitive action/image. This scene takes place at night, so he can excise any background detail and with Concrete mostly sunken in the water he can leave out most of the character. What’s interesting to me is that he doesn’t do a very direct moment-to-moment style panel transition. The gap from one panel to the next is inconsistent. He doesn’t show an arm raised, then it splashing into the water, then the next arm raising, then it splashing into the water. On one hand it makes the page a little more interesting to read, but on the other, it takes something away from communicating more of the repetition and possibly boredom of the action. Perhaps, Chadwick is trying to avoid that sense of boredom because, in the context of surrounding pages, it does not seem that Concrete himself is bored by these motions. Doing a schematic moment-to-moment breakdown would be easier (you could start just copying panels after one cycle of motion), and it says something about Chadwick that he didn’t take that route.

The sheer number of panels does communicate time passing in a repetitious way, particularly if you actually look at every single panel. I’d have to wonder how many readers do that, instead of just scanning and moving on. The page is also an economic way to make the reader feel time passing, rather than stretching it out over numerous pages (something I often get stuck doing in my work).

I can’t off the top of my head think of other pages with this many panels (a question that came up on the list), books like Ninja reach 50 and Mister O has 60 per page. Though something like Longshot Comics where the style is an extreme form of minimalism could pack a lot into tiny panels like that, most comics would reach incoherence at that level. [Edit: There’s a 160 panel page from Longshot Comics in this review.]

I have some pages with an extreme amount of panels in one sequence of Things Change Book Three where I start with a single panel page and then doubled the number of panels every page. It quickly became hard to maintain any narrative inside a single tiny panel, so my panels became fragments of larger images. That’s not quite the same thing, though for my story the fragmentation of perception was the point of all those panels.