If Storeyville told a conventional narrative of search and discovery with a linear movement, clear characters, and distinct settings, then Chimera is decidedly unconventional, juxtaposing reality and dream, the everyday and the fantastic with a poetry that has the distinct feel of early 20th century Surrealism.

At a basic level, reading a comic is a process of joining fragments. This is often done with clear guideposts for the reader: narrative captions tell us “two days later” or “back at the house”; the repetition of characters and backgrounds allows the assumption of time or motion; or an initial panel sets the stage for the relation between characters and objects in the panels which follow. This process becomes more complicated and reader intensive as the guideposts are removed or hidden.

Chimera requires work by the reader. Surely, it could be enjoyed by reading breezily through it–the imagery alone is enough to captivate the eye, but I found that the more I read and the more I worked to make connections, the more I felt engulfed by the comic. The closer I read, the more the art gave back to me, aesthetically and narratively, the more I wandered over the images, appreciating the fine compositions and handling of colors (no one else could make a yellow and pink comic so attractive), and the power of the minimal lines. There is truth to the idea that some things are worth working for.

The story, such as I decipher it, involves a young couple’s bittersweet love story. The beginning is perhaps a dream or a fantasy: erotic, mythic, and protean.  The narrative becomes clearer when we see the young couple at the beach. The woman is swimming in the sea, the man lying on the beach. Perhaps he was fantasizing as he lay there or we were seeing their combined dreams? They go into a town. They are playful, obviously young and in love, though the man seems troubled by something that takes the form of a minotaur. The woman laughs it off. They go to the movies (Douglas Sirk’s There’s Always Tomorrow). 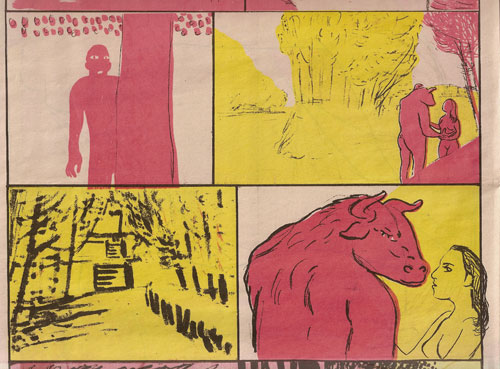 The earliest pages of the comic are mostly large images free of any conventional sequential narrative, two or three to a page, figures, objects, and landscapes: a man, doubled, looks over at a woman, also doubled; a large vase or urn juxtaposed with an archway through which one can see a puff of smoke; repeated images containing a house (like a toy) with smoke pouring from its upper story; sexual imagery of the man and woman, together or separate. A narrative sequence of more conventional panels shows a tree-filled landscape where the man spies the woman standing with a minotaur, who glares menacingly back at the man. [See above] Classical elements, such as the urn and minotaur, add an out of time quality to the images, a sense of the mythic past. 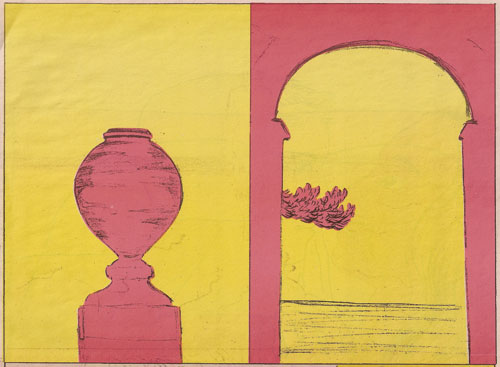 On repeated readings, small details and connections become evident. The silhouette of a woman walking on a beach is echoed in the curves of the large vase/urn on the opposite page. The angles on the vase’s base are repeated in reverse on an archway in the next panel. The pink of the woman is the pink of the vase. The pink vase on a yellow field becomes the pink archway with a yellow opening. After many readings I noticed the vase and archway repeated in a panel at the end of the comic showing the couple in a movie house. In this way the early abstract and mysterious pages gain resonance and context through the latter pages, much like the unravelling of dreamwork. [See above and below] 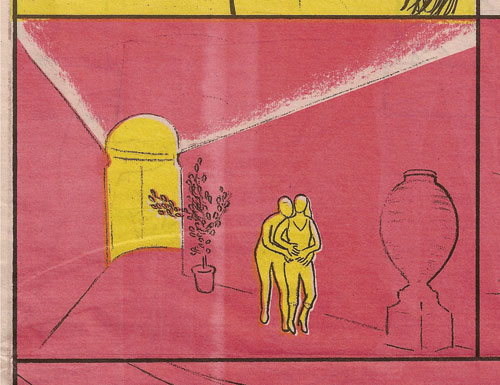 Even in the more conventionally narrative and linear sequences, Santoro subverts a conventional sense of consistent appearances from one panel to the next. The simple lines and forms allow a blurring of perceptual boundaries. In one sequence we see a wide panel of the man on the beach and the woman floating in the water. The following two panels (a single tier on the page) show a pink spherical shape on a field of yellow. The first of these has a few black lines on the pink shape: the woman’s head peaking out from the water. The next panel’s pink shape is bare: a rock jutting from the water that we can see behind her in the first panel? The simplified art and limited colors increase the correspondence between the woman’s half-submerged head and the large rock rising from the sea. Or is it the sun? While this ambiguity may be a weakness in many conventional comics, here it is a strength that opens up interpretive possibilities. The indicia on the last page, defines “chimera” as “the dream beyond the dream.” A dictionary I have defines it as “something wished for but impossible.” This colors my view of the couple, instilling them with more sadness, less hope. Are they doomed to break? That’s up to the reader.

[All image from Chimera by Frank Santoro (Picturebox, 2005).]