[This was originally written in the summer of 2007 for a print publication. Since it has yet to appear, I’m posting it here. I’m going to post each of the three parts as a separate post during the course of the week. While they are part of one piece, they are also independent.]

My enthusiasm for the comics work of Frank Santoro has not abated since I first read Chimera early in 2006. With each new work and each rereading of an old one, I find new reasons to rave about the inventiveness of form exhibited and the aesthetic pleasure afforded by his artistry. In reading these works again with the thought of writing, I find it impossible to settle on any single facet of his work to discuss or any single work to examine. Instead, I offer these three appreciations of Santoro’s comics, focusing on ways they vary from certain conventions of comics.

Comics, in general, are focused on characters, not only in a narrative sense (telling their story) but visually as well. The traditional comic strip features characters in front of backgrounds as actors on a stage, and this style has changed only slightly over the decades. Page through a comic and count how many times you see a panel that is just a landscape, no characters. Not too many, I’d bet. Now take out the ones that are there just to set a scene. You might be left with one or two or none. A place as a character is extremely rare. Panels are composed to focus on characters and the landscape is just background.

Santoro’s Storeyville stands out for its use of the landscape as a substantial and important part of the work. Whole pages pass without the appearance of a single character or figure. The landscapes create a sense of place and act as a key figurative element in the narrative, not to mention the immense aesthetic pleasure the reader gets from them. Storeyville‘s story is that of Will, a hobo in what I imagine is the Depression era, who travels from Pittsburgh to Montreal in search of his old friend Reverend Rudy. His search is not just an attempt to rediscover his friend (and ask forgiveness for an event that occurred on their last meeting), but also a search for direction and his place in the world (that the object of his quest is a “reverend” only adds to the metaphorical weight of the journey). As a rootless wanderer he lacks a connection to any one place, and in focusing on landscapes, Santoro strengthens the reader’s sense of this wandering. 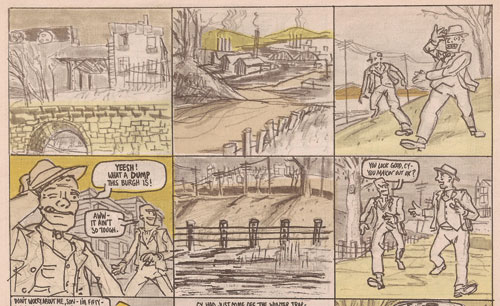 The first page of the comic begins with 14 panels of landscapes, only 4 showing a very small figure. This sequence immediately sets not the scene but the importance of travel and movement: the panels shift through a variety of locations with a carriage, road, river, bridge, or train tracks in every one. Travel starts and travel will end the narrative. A few pages later, as Will talks with an acquaintance, the panels of conversation are punctuated by panels of landscapes. They talk of the “road”, friends “scattered to the four winds”, and the “burgh”, each statement followed by a landscape panel.

When Will learns that the Reverend was last sighted in Montreal, a panel of his head, narrated with “The thousand miles to Montreal meant nothing to me,” is preceded and followed by landscape panels of train tracks moving past houses on a hill. [See above] Here the landscape is not background for the character, it is both a setting and an externalized image of his internal life. The rendering of these images is tight and detailed, with the distinct appearance of being drawn from life (Santoro is from Pittsburgh). The presence of the hills is important here and elsewhere at the beginning to recreate Pittsburgh as a place that contrasts with the landscapes which follow.

As Will hops trains to Montreal the landscape sequences, alternating with those of Will on trains or sitting in small town jails, become more abstract and loose. [See above] Washes of brown and yellow (the two colors used in the comic) create hazy fields and skies. The landscapes of the journey between cities are less distinct and detailed–the barely noticed and quickly forgotten fields that connect one place to another. Will is not traveling to appreciate the scenery; he travels with his immediate destination in focus and everything else just passes by. The number of these landscape panels add to the sense of time passing and the long journey.

In Montreal, the landscapes once again become more distinct with darker, thick lines in contrast to the soft pencils used in the Pittsburgh images. While the Pittsburgh images conveyed the hills and varying heights of that city, the Montreal images are flatter, shown from a lower perspective. Even without knowing either city, the change from one to the other is palpable. The darker lines echo the increasing despair of Will as he searches fruitlessly for the Reverend.

I should note that Santoro’s use of landscapes as background is of a whole with the landscape panels themselves. Many of the panels have characters acting in front of the hills of PIttsburgh or the streets of Montreal. Late in the comic, a long scene on a ship allows Santoro to fill his panels with the crossing geometries of the ship and its rigging. As much as this story is about place and travel, the backgrounds act as almost constant reminders of such. 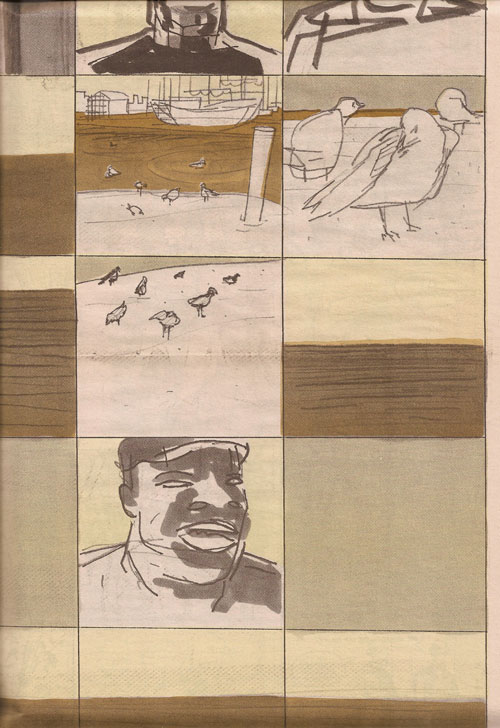 Just past the halfway point, Santoro switches the perspective to that of Reverend Rudy aboard a ship. He steps out onto the deck, and the panels show us the water and the birds on the shore in a beautifully abstract representation. [See above] The water is a field of brown below a field of yellow with a few pencil lines or a sinuous wash of gray to show the movement of the water. Two panels show only a yellow-gray wash, a vast empty sky or a calm sea? Birds congregate on the shore, delineated by simple yet clear pencil lines. These panels are interspersed with images of the Reverend looking around and smiling. The two pages of this scene are a pause in the comic, a brief respite from Will’s movement and the crowds of Montreal. Narratively, figuratively, and stylistically they work in contrast: quiet, slow, and sparse. The reader feels/sees Reverend Rudy’s peace. He is no longer like Will, and perhaps this quiet peace, this time to stop and contemplate one’s surroundings is what Will searches for.

The landscape panels are mostly absent for the rest of the comic as Will and Rudy meet up again, a flashback shows us their last meeting, and Rudy gives Will advice. Will’s search has come to a temporary end: his explicit goal of finding Rudy is met, yet the implied goal of finding some place or path for himself is not. As the story ends, Rudy is sailing off in the boat and Will stands smiling at him on the dock. The reader turns the page and is greeted by the final two page spread, the final landscape: a gorgeous minimalist seascape that spreads one image across the 30 panels that grid off the pages. Just lower than two-fifths of the way up the page, a thin white band of negative (off-white) space separates a brown field (water) from a light yellow field (sky). A minimally rendered ship in black lines and yellow sits in the eleventh panel of the first page, its masts just crossing up into the eighth panel. All these joined panels are both open (compositional space) and connected (page space), a vast possibility for Will, a space waiting to be filled in.

[All images from Storeyville by Frank Santoro. 2nd edition from Picturebox, 2007.]