My selection of best comics for the year should be up tomorrow, and a last minute addition to the list is Brian Chippendale’s massive Ninja, an impressive volume from production to content. I read it twice in a row, and I’m sure I’ll be going back for more.

In it’s way, this book is both art book and comic, a showcase for Chippendale’s visual work, a collision of genres and ideas. The majority of the book consists of the single page “Ninja” strips divided into four chapters. The first chapter includes 14 pages of pencilled comics Chippendale drew when he was 11 or 12. These juvenile pages tell the adventures of a ninja as he breaks into places, gets into fights, and steals things. The drawings are flat and the stories about what you’d expect from an 11 year old. Chippendale claims these works as the the impetus for the rest of the strips he took up many years later, but their inclusion here quickly loses its novelty. Most of the book consists of strips drawn in the past four years in a style that will be familiar to anyone who’s seen Chippendale’s work. The ninja character is featured in some of these, particularly at the beginning and a climax of sorts towards the end, but the connection between this character and the one in the juvenalia is in name only.

The modern strips are an amalgamation of genres including science fiction, fantasy, superheroes, political commentary, and autobiography (at least there seems to be autobiographical elements to it). The story quickly spreads from the ninja to an ever growing cast of characters and events centered around a city named Grain. It’s nearly impossible to summarize the profusion of goings-on in these strips. Chippendale makes great use of ellipse and nonlinear narrative. Much goes unsaid and is only subtly revealed through image or word. The reader must pay attention and even then I found a reread necessary to pull out a few more of the narrative threads (and I have no doubt more will be revealed with subsequent rereads). 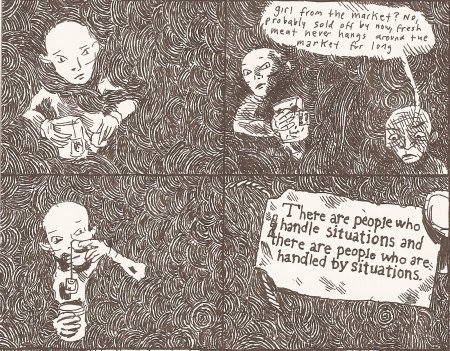 The city itself is the only real protagonist. Its quick population growth and gentrification provide a background to many of the storylines as do political machinations by the politicians and wealthy. Judging from interviews with the author and stories about Fort Thunder (which he co-founded), much of this is socio-political commentary on Providence, Rhode Island. Landlords evicting tenants, tenants fighting back, privatization of water, cleansing of neighborhoods, developers, rising prices, and more all point to local political commentary while later strips involving war propaganda, prisons, and torture point to more global current events (the torture page in particular is an amazing collage of thematically linked panels from physical torture to getting picked last for a team or waiting futilely for a phone call). This isn’t to say that the story is some kind of allegory, but rather that Chippendale has injected real world issues into his fictional superhero fantasy world in a way that adds depth to the work and doesn’t feel tacked on as an afterthought or as some kind of attempt to be serious or relevant. 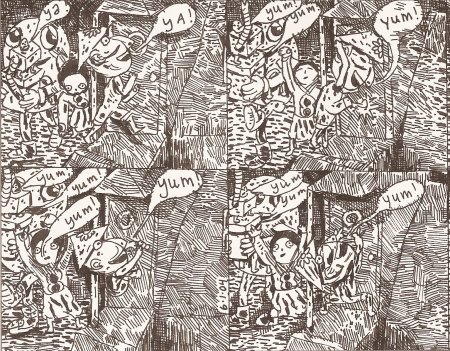 Acting on this backdrop is a collection of characters ranging from kids in a band to robots, superheroes, monsters, and a large M&M man. The characters are so numerous that I found it very hard to keep track of any of them. Each seems to exist at the moment of a single strip or brief sequence of strips, but only a few carry across the book with any consistency. This excess of characters can create a sense of confusion (there is a partial dramatis personae at the end of the book), but if one accepts them this method can be seen as a way to expand the fictional world. Much how superhero comics create their own world over the course of issues–with proliferating friends, villains, rivals, etc.–Chippendale fills in his world in a compressed manner, quickly populating it with innumerable characters. The storylines grow and create a narrative collage filled with connections, surprises, and odd juxtapositions, but lacking in any real closure. The book not so much finishes as just ends. It is only since reading the book that I learned this is only the part of the story and that more strips are planned (I can’t wait).

Most of the strips consist of 50 (5 across, 10 down) small rectangular panels, which must be read in Chippendale’s snaking, back and forth way. Like most manga these days (which have you read right to left), an instruction page is included to tell you how to read. While it is at first a little awkward (and remains so at the times when larger panels are used that upset the tight grid), I quickly became accustomed to the reading and found that it provided a tighter sense of movement from one row to the next. The eye follows along with a smoother motion. Chippendale frequently uses panel transitions that involve short periods of time, and the tight flow of the panels helps this movement. 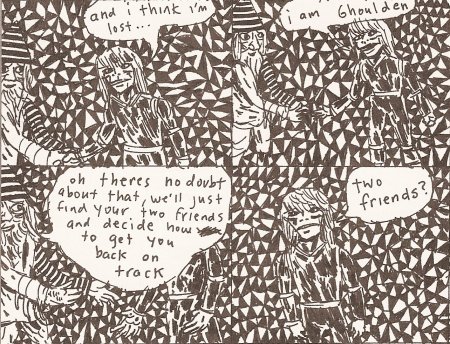 Chippendale’s drawing style is rough and sharp, unpolished and direct, he seems much involved with mark making. Pages are filled with lines, dots, and hatches. The physical labor of all that marking shows how much he must really love making these strips (else, he’s some kind of masochist). These patterns and marks give the strips a visual strength, a physicality, but it also makes for visually crowded pages. The pages seem to exist as a jumbled mass of line and dot, which forces the reader to immerse themselves in the page to discover the panels and the narrative. The sheer size of this volume (11 X 17 hardcover) makes for an immersive reading experience. You really have to involve yourself with the book: it takes up your whole field of vision and you can’t just take it anywhere (not train reading). You have to sit down with the book and read it, concentrate on it. And you know what? It’s worth it.

Inbetween each chapter are a few pages of drawings that look a lot like what my notes and notebooks looked like in high school after spending hours doodling on them during class: pages filled with characters, objects, words, and patterns. I don’t really get much out of these pages, more an interruption of the strips than anything else. Still these pages add to the design of the volume. Once again Dan Nadel (of Picturebox) has produced a beautiful, lavish volume of comics that veers us somewhere between the worlds of comics, (fine) art, and the handycraft of minicomics (my copy even has an original sketch in the back).

So I read it for the strips, the narrative, and I loved it. I don’t think these few paragraphs can really begin to discuss this book. Chippendale stretches the boundaries of genres to create something both familiar, almost pastiched, yet unique. Ninja is the kind of work that reinvorgates my love for comics and my desire to make them.