Almost all comics are figurative (that is, representational). More than that, the greater cultural awareness of comics is through characters. A great swath of the field (comic strips, comic books, manga, bd) is covered by the neverending (or nearly neverending) narratives of characters. Other than soap operas, no other narrative form has that same endless character-ography. In a popular sense, comics are the characters: Superman, Batman, Spiderman, Charlie Brown, Garfield, Tintin, etc. Decisively non-character comics are rare. Most might fall into the category abstract (non-figurative) comics (e.g. most of Andrei Molotiu’s work, Trondheim’s Bleu, “Event” by Anders Nilsen in Mome, or others you could read about). But sometimes a figurative comic exists which is also characterless.

Over two years ago I posted a link to Warren Craghead’s beautiful and figureless tribute to Charles Schultz. Those absent landscapes and objects are evocative drawings in themselves, but Craghead really draws them out with the text. The comic is not exactly character-less. No characters are seen, but he is playing on our recognition of characters through the text/voice.

In my minicomic from last year, I tried something similar, but I left out any text. I redrew a number of panels from different classic comic strips without the characters and made a few experimental pages (pages 9-10). So it was with great delight and surprise that I learned about Niklaus Ruegg’s Spuk (Thesen gegen den Fruhling) (roughly: Spook/Ghost (Theses about/on spring/springtime)). All credit to Andrei Molotiu who originally posted about the book on The Comics Journal message board and who provided me with images and information.

Spuk is a collection of four “stories”, though it might be more honest to just call them “comics”. Based on what I am told by Andrei and a poor computer generated translation from German, the stories were creating by excising all characters and word balloons from four Carl Barks comics (or perhaps some other artist’s Disney comics, the publisher’s site mentions “Donald Duck” and “Mickey Mouse” but not Barks specifically). What remains is a series of backgrounds: interiors, exteriors, furniture, trees, and plain color fields. The stories are wholly unusual, serene yet slightly frenetic in movement. 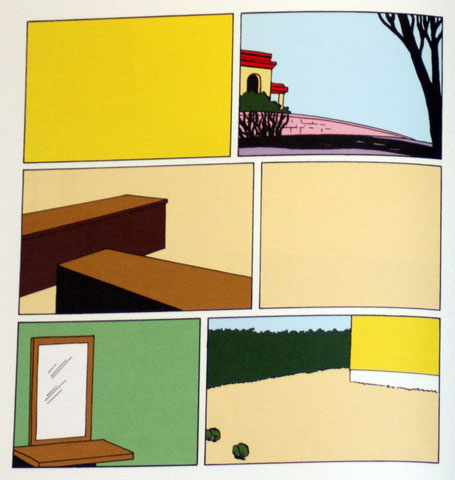 I can’t quite tell from the panels in this book whether the panel and pages have been retained in their original order or not. There are definite repetitions of locations and sequences that maintain a certain coherent movement, but often the panels do not seem to add up. Granted, without the characters it is impossible to recreate any story, and that clearly isn’t the point (other than a nagging interest in the process of creation). It does raise as an object of study the way Barks organized his stories. How did all those scenes fit together coherently to have such a variety of quickly changing scenes? (I don’t know, my reading of Barks has pretty much been limited to one collection of Uncle Scrooge stories.) 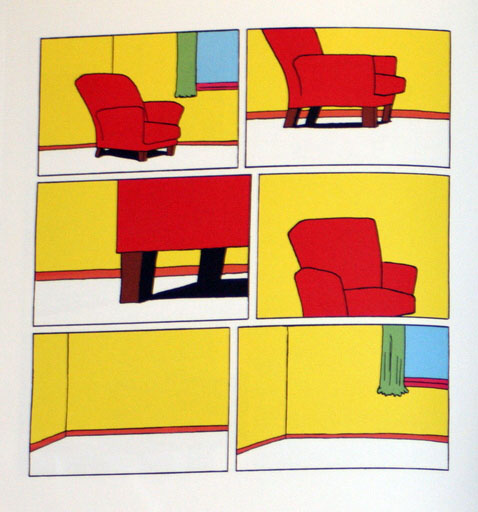 I find it difficult not to try to force some kind of narrative meaning back into the book. Knowing the origin of the panels and noticing the repeated locations or objects, the specter of narration hangs over the pages. I use specter with purpose, since Spuk is translated as “spook” or “ghost”. The ghosts of the title could be multitudinous: the absent characters, the absent narration, the absent identifying hand of the original artist. In a strange sense, the ever shifting backgrounds become a constant search for some thing: a single character, a story. By following along with this search, one quickly reaches a point where a character becomes implied, a character who is the searcher, the viewer, the character through whose eyes we see (a form of ocularization). I reach this point in my thoughts, and I want to turn away from it. I want it to be possible to read Spuk without turning to characters, yet in their very absence, which once was a presence, this is difficult. An occasional panel hints at this presence: an open doorway, a tent with its flaps pulled slightly apart in a way that seems unnatural without a hand to hold them (see below). In this way, a similarity can be drawn to Craghead’s work mentioned above, yet Craghead relies on the absence/presence of the characters, of specific characters, while in Spuk, no sense is retained of Donald or any of the other possible characters that might have filled the original stories. 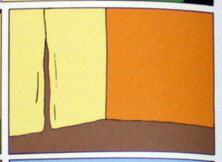 Any reader with knowledge of similar original works will also notice this absence in panels that are nothing more than fields of a single color or a geometrical abstraction of three colors that hints at the corner of a room (floor, wall, wall). These abstractions go almost completely unnoticed where characters are present, talking and acting, yet by removing characters these simple abstractions (a classic and ever present element of comics (recall that ubiquitous horizontal line that hints at almost every sort of room or landscape)) transform from background to foreground. Without the characters that form the primary focus of almost every comic, these backgrounds become the thing that is the focus of the reader. Perhaps the ghost is all those forgotten backgrounds, those abstract rooms, buildings, and landscapes that form a trope of comics, ever present yet ignored by not being present enough. In this sense, bringing to the forefront the structure, the scaffolding, the ignored by repetition, Ruegg has created a form of comics poetry that draws out the beauty of those tropes. 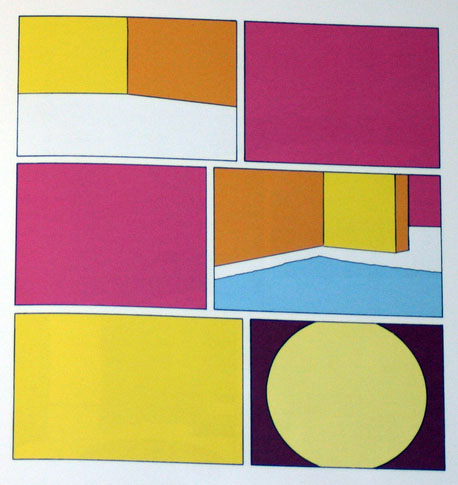 Take the almost completely abstracted page above. The repetitions of shapes and colors, the variations of shape and color, form a bare minimalist comics page that looks like something from mid-century painting more than the comics page, yet, by virtue of the form, I read it left-to-right, top-to-bottom, as I have been trained by other comics pages. 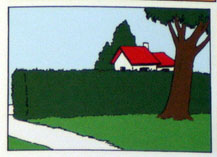 The images in Spuk have a beautiful and bright simplicity to them. The unadorned shapes and simple lines are direct and iconic. The colors are bright and flat, often unrealistically saturated, using a limited palette that help create a sense of unity throughout the book. The same yellow quadrangles/walls are repeated in slight variations. Those iconic bushes could be anywhere creating a vague sameness in the outdoor scenes that masks a possible difference. Are we in the same front yard on the same street or are we somewhere new? The colors retain the look of the original comics, though dressed up by better printing. They look like old comics much more than the modernized coloring in the collection of Barks’s stories I have from recent years. Overall, Ruegg’s recreation is amazing. 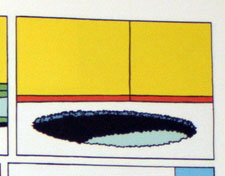 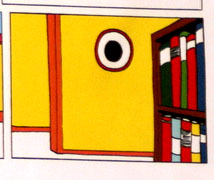 Despite the abstract banality of many of the scenes represented, Spuk is an experience to be enjoyed for its formal aesthetic beauty and playful concept. The bright and simple scenes are punctuated by the odd and, occasionally, surrealist elements (a wall hanging of some sort that looks like a giant eye peering back at the reader/viewer, a strange hole in the floor of a room) which act like scattered mysteries, begging the question: what is going on? Spuk leaves that interpretation to the reader.

For the interested, here is the original German description of the book from the publisher and a poor translation through Google:

[With “SPUK» Zurich, the young artist Niklaus Rüegg a comic strip to the special nature. The four pictures stories, which he created for this publication, remember clearly displayed on the popular Donald Duck and Mickey Mouse comics. The content, however, goes beyond “SPUK” each convention.
For his series of pictures has Niklaus Rüegg existing stories depopulated so that the reader is a series of outdoor and indoor spaces in which any trace of the missing protagonists to see it: It is completely deserted his pictures, the stories without any action. Nevertheless, it is something like a narrative momentum. The furniture of the rooms and the natural elements are used for the backdrop for new, imaginary stories: The viewers and viewers are invited their own stories to invent.]