I have a hot and cold relationship with the work of Anders Nilsen. His Big Questions series is fascinating and well-constructed (though I’m waiting for the collection since I can’t catch up with the out of print early issues), yet I found Monologues for the Coming Plague to be an utter disappointment which felt as if it had been tossed off in a minute or two. His work in the anthology Mome has given a similar reading experience for me, some good, some that feels unfinished and hasty. I do respect Nilsen’s willingness to experiment in ways that few comic artists would, taking cues, I think, from the conceptualism and minimalism of the fine art world and combining it with the narrative thrust of comics. His use of minimal drawing puts a great emphasis on text in many of his works, but it is clear his minimalist drawings are a result of purposeful stylistic choices rather than an artistic limit (for proof, one only has to look at the drawing in Big Questions or the Sysiphus story in Kramer’s Ergot 4).

My plan herein is to look at Nilsen’s work in 4 issues of Mome (I’m skipping pieces from two issues that I have because, well, I don’t have anything good to say about them).

“The Beast” (Mome, Summer 2005): This story shares something with the pieces in Monologues for the Coming Plague: a single faceless character speaks. In this case the character appears in four panels (albeit frameless and backgroundless) in front of a landscape photograph that stretches across each double page spread. I’m not clear on reading it what the purpose of the landscape backgrounds are. They don’t bear any apparent connection to the character or his words and seem to change at random. The idea of using a unified background for a double page like this is novel and interesting, but it doesn’t get put to any real use other than filling up space. The background could place the character in a setting or evoke a mood. I can see potential in this tactic, but it is not taken advantage of here. As for the words, they jump around and don’t come to any real… point. It feels improvised, some kind of automatic writing, on which more soon.

“Event” (Mome, Fall 2005): This is my favorite of all the stories, it’s adventurous and brilliant. This story consists of colored squares of varying numbers, sizes, and configurations with text underneath. For instance, a three page sequence: a gray square captioned “What you said you would do”; a square subdivided into four different colored squares captioned “Your reasons for not doing it: stated”; a larger purplish brown square “unstated.” The whole things relies on an interaction between the captions and the squares in relation to each other from one page to the next. The text and image are interdependent, requiring the combination to create the meaning. These pages would have little to them on their own, but as one reads from one page to the next, the differences between the size, color, and configuration of the shapes creates a pathway for interpretation. For instance, a page depicting a smallish grey green square captioned “Time spent trying in vain to correct the damage done [by you]” is followed by a page with a larger grey brown square captioned “[by others]” (see image below). The simple shift of the size of the squares from one page to the next emphasizes the certain qualities of the “you” in the story and his/her attitude to clean up the mess made by this “event”. It’s a simple yet highly effective way to convey this information based on one of the basic elements of comics, reading the difference from one panel to the next. A great example of an abstract comic. Like many of the other works here discussed it is a minimalist piece, but the minimalism is successfully used. 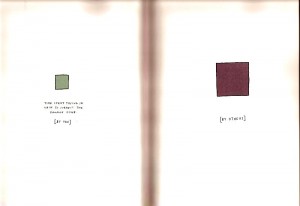 Two page from Nilsen’s The Event

“On Whaling: A How To” (Mome, Winter 2006): Another talking figure comic: this one has no background at all and the figure goes through an almost constant transformation (veering from a hatted figure to a Haring-esque creature to weird hybrid-person/objects). He is drawn with a pink outline filled in with light blue, a surprisingly pleasing visual combination that looks great in the minimal style with the white background. The figure’s words are an often funny commentary on the classic “where do you get your ideas” question (“One sure-fire useful trick to getting good ideas is to accumulate diverse experiences and live an interesting life. I have not tried this myself, it seems dangerous. But I know that Herman Melville and Ernest Hemingway got a lot of material this way for their zines about whaling.”). On the third page, the figure offers “guidelines that are sure to yield productive results,” outlining a brief method for a kind of automatic comics. Start with some kind of minimal figure, then find words for it in sixty seconds. After that sixty seconds you turn the page and draw the next page/panel.

This description of a process leads me to look at “The Beast” and “Monologues for the Coming Plague” in a different light. Are they perhaps examples of this style of automatic comics writing? I can’t say this improves my enjoyment of the stories, but it better explains where they are coming from. The Surrealists’ experiments with automatic writing are more interesting on a theoretical level than in actual practice. Drawing on the unedited contents of the unconscious is all well and good for the author but to the reader the results are more often than not just boring. Personally it leaves me unsatisfied.

The way the character in “On Whaling” transforms does remind of me of some Surrealist objects and juxtapositions, such as the intersection of the character with various objects (akin to the “nothing is more beautiful than the the chance meeting of a sewing machine and an umbrella on a dissecting table”). This story is much more successful than “The Beast”.

“The Notary” (Winter 2007): Very similar to “The Beast” (even in its title), “The Notary” features an almost identical figure this time on a background of slightly blurry maps. The figure’s monologue is focused on his all encompassing doubt and his doubt of his doubt. He interrupts himself to perform mathematical calculations, which might be read as a certain type of certainty in contrast to the doubt. Math, at least at its basic level, provides verifiable answers and rules, such that one does not find in life. Though in both cases the math is “multiplication” which could also be the multiplication of doubt. I found this story more successful (again) than “The Beast”, though only on reading it after reading Nilsen’s Ignatz issue The End, which seemed to add a certain pathos to this character with his all encompassing doubt (also, The End has math in it too interspersed with monologue). Perhaps this story is much less automatic, or else, as an automatic exercise it brings forth certain emotional resonances.

More on Nilsen when I get a copy of Don’t Go Where I Can’t Follow.