Adding another dimension to the work of Lewis Trondheim is Bleu (for the other dimensions see all my Trondheim posts). Packaged with a plain blue cover with plain blue flaps, the only text in the whole book is hidden beneath the back cover flap giving us a basic indicia. One also notes the Oubapo logo on the page, hinting at some formal constraint to the piece.

The book’s 30 pages are an extreme example of abstracted art in comics form. The whole comic is a sequence of colored blobs and dots passing, intersecting, overlapping, and transforming on a blue background (the paper itself is a bright blue). 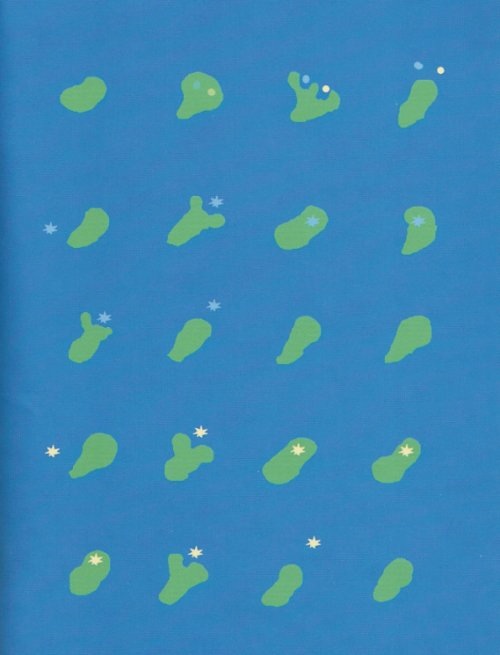 That’s the view of the page as a single image. But, while the page contains no panels as such, an experienced comics reader can easily divide the pages up into twenty panels in five rows of four. Trondheim maintains enough of a visual consistency from one “panel” to the next that one can construct a page of 20+ blobs into a timeline, a sequence:

A green blob is approached by a yellow star. The blob splits in the front and the star overlaps the blog. The star stays in place for a few images and then it moves away from the green blob as it once more splits in the front. The yellow star disappears off the page and a little later a blue star appears. It too overlaps the blob, stays for a moment and then leaves. A yellow dot and a blue dot then appear. The blob splits at two points and the two dots overlap the blob. They fade and disappear.

While it’s just a bunch of blob, stars, and dots on page, by applying the reading method for comics, one sees the many elements as repetitions of the same entity. The twenty green blobs are really only one green blob repeated twenty times. The stars and dots too become distinct: one yellow star, one blue star, one yellow dot, one blue dot, each repeated multiple times. After we begin to see those shapes as a repeated individual, we can begin to construct the sequence as I did above.

On this level one can read Bleu. The ever shifting interactions of a number of shapes of different colors. But, one can begin to look at them in another way. The shapes take on life. Not just abstract shapes, they are abstract creatures, amoeba-like. Then we see their interactions in new ways:

So we have a more narrative reading of these abstract shapes as interactions of entities. We see many of these interactions in the book: attraction, repulsion, joining and unjoining, ingestion, digestion, and more. One could even hazzard a metaphorical level to these abstract interations. At some abstracted narrative level are not these types of interactions the basis of all stories: meeting, parting, attraction, repulsion, taking in, letting go–all of which could apply to people interacting with people or people interacting with ideas.

Trondheim has created a truly abstract comics, both visually and narratively. Surprisingly (and I was skeptical) it’s an enjoyable book to read. I found a lot of amusement in these strange little blobs interacting with each other (though I’m sure much more would get tiring). Trondheim manages to provide enough variations to provide novelty and amusement. Sometimes colors change, sometimes shapes, sometimes numbers of entities. Most often he varies the interactions between the entities. I’m not sure what constraint Trondheim used on this book, but if it isn’t the restriction on representation, it might be some kind of permutation of situation (though it doesn’t seem that systematic).

This is not just abstraction but minimalism. How much does it take to create a comic? Trondheim has taken this perhaps not to the limit, but certainly further than anyone else takes it. Here we have a comic that excludes much of what one expects to find in a comic. No gutters. No balloons. No text. Characters? Not really. Panels? Kind of, but vaguely. What we get down to is comics as a way of reading, comics as a way of looking.