Alcoholalia: a remix of Tony Millionaire’s “Maakies” no. 35 by Andrei Molotiu. 2004. 24 pages with cardstock cover. $4. (Available from the Poopsheet Shop.)

Andrei Molotiu is best known for his abstract comics. This particular comic is, as the subtitle states, a remix of a Tony Millionaire Maakies strip. Molotiu reprints the original strip on the back, which serves as a nice reference. Molotiu has taken different pieces of the Maakies strip and created his own abstract comic from it.

The art has probably been created with a computer. Parts of the original strip are mirrored and/or repeated to create patterns, abstract shapes, and rorshach-like blots. Because of this mirroring the imagery in the panels are almost all completely symmetrical. The imagery is quite powerful, almost overwhelming at times, but still quite attractive. The images are organized as panels on a page. Molotiu starts with a standard six panel page, but quickly begins varying the layouts (though he maintains rectangular panels as his standard).

Little can be said by way of narrative about this comic. This is one of the least narrative comics I’ve read. The reading interest here works with the concept of a remix. The symmetrical images, the varied panel layouts, and the frequent way the images look like diagrams of soundwaves creates a feeling music in the comic. As one reads the pages, one gets more and more the sense of timing, rhythm, and dynamics (as in changes in volume, using the term in a musical sense). Panels with larger and fewer elements are slower; panels filled with small repeated patterns move with great speed. Similarly busy patterned panels are noisy and loud, while the sparser panels are often softer.

When words enter the comic at page 10, they are just another instrument in the mix, another sampled element that is repeated and reworked and punctuated through the images.

In the example above, note the way the black shapes move into the center of the second panel from the corners of the first panel. The letters (mostly the “E”) make a converse movement to the corners. This reorganization of elements is common throughout the comic. 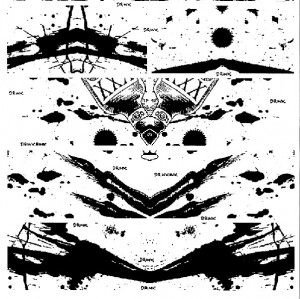 The partial page above shows a good example of both text entering the panels and the use of identifiable objects pulled from the original.

I wasn’t expecting to like this comic much (I bought it as part of an investigation into abstract comics), but when I really sat down and read it and started seeing the music, I began to feel the rhythm and the dynamics.

Kind of like Trondheim’s Bleu this book uses repetition to maintain a narrative (or at least visual) coherency. Molotiu is working from a limited palette (the original strip), so shapes, lines, and fragments appear over and again, providing a kind of visual leitmotif to the comic.