Note: I wrote previous on this part of Phoenix back in 2006.

The story “Civil War” takes up most of two volumes in the Phoenix series. Again, the story goes back in time to the end of the 12th century, following a number of characters during a tumultuous time of civil war in Japan. From some recent reading, I know Tezuka used historical events as a backdrop for his stories, so I’m assuming a lot of the major events and leaders in this book have some historical basis. At times the various clans and factions and places do get hard to keep track of, some seem to appear out of nowhere with little context. I’m not sure chaos doesn’t help the story by making the civil war a little more hard to grasp.

Tezuka spends a lot of time with the stories of Benta and Obu, two young mountain peasants who are engaged to each other and both become involved with separate factions in the civil war. Both attain levels of responsibility above their class backgrounds (Benta becomes a samurai, Obu a noblewoman), moves that both emphasize and gloss over the vast issues of class in historical Japan (something seen a lot more clearly in manga series like Lone Wolf and Cub (which I’m also reading (but not blogging) my way through)). We see a lot of these two characters and are made to empathize with them, but, by the end of the story, when Tezuka brings out reincarnation and an animal parable, one is tempted to say two of the faction leaders, who until then seemed distant and secondary, are also protagonists.

In either case, this story shows the unreason of war and power struggles. I don’t think a single character who gets any attention in the story survives to the end. One by one, all the primary characters are killed off in different ways. Some of the major characters kill each other, some are killed unexpectedly by minor characters. War kills off everyone from peasant to the most powerful lord.

The ending only adds to this bleak message. Two of the dead leaders are seen in the afterlife. The phoenix appears to them, and tells them that they will be reborn in a time before their last lives, because “there is no time in the universe, at least not as humans know it.” (233) Once again this element of one of the stories echoes out to the series as a whole and its structure.

The two men are reborn as a monkey and a dog. The reader immediately realizes this past they have been reborn to has already been partially explained earlier in the story. Benta, the peasant, is at one point taken to an armless mystic who lives in the woods. He is Gao from “Karma” still living over 400 years later. He tells a story about a monkey who is defeated as leader of his tribe. Gao adopted the monkey, to help him heal, as well as a puppy. The dog and monkey become friends (cue Diseney-esque animals from Tezuka), and eventually, the monkey gets the dog to help him retake leadership of his tribe. They remained friends but a year later died at each other’s throats. The retelling of the story at the end of “Civil War” explains more of the circumstances with the monkey’s tribe and the dog’s pack fighting.

The story equates the warring human clans with the warring animals. Irrationality, lust for power, and a determination to help one’s own people to the detriment of others only causes death for all involved. Once again Tezuka shows leaders causing the death of a great many people, dragging peasants along with them.

The phoenix’s appearance at the end of the story is its primary actual appearance, but throughout the narrative characters are involved with a bird that is believed to be the phoenix (actually its a peacock). Much blood is shed over the attempt to get ahold of the pseudo-phoenix’s supposed immortality granting blood. In this case the various leaders vying for immortality express their reasons as being primarily about the survival of their clans/families. This is not unlike Romy in “Nostalgia” who is obsessed with the survival of her descendants.

One unusual (yet welcome) aspect of “Civil War” is the character of Obu, a rare strong and active woman. She perseveres through a number of experiences, in the process showing clear growth in her ability to assert herself, in particular, not just following along with whatever the men in her life tell her to do. She takes stands and acts on them. In great contrast, Benta remains through almost the whole book a dumb oaf who continues to follow orders despite his clear disgust with them. His complaining, yet unwillingness to act on his complaints, is a constant annoyance through the book and perhaps a lesson aimed at the reader.

In fact, the story as a whole seems to offer lessons for the reader about power hunger, blindly following leaders, war mongering, and class divisions. And it’s not much of a step to think of World War II and Tezuka’s experiences therein. Moreso than previous stories in the series, “Civil War” really makes war an all encompassing force that consumes everything beneath its weight.

Visually, Tezuka pulls out all the stops for this one: great layouts, site gags, detailed landscapes, etc. 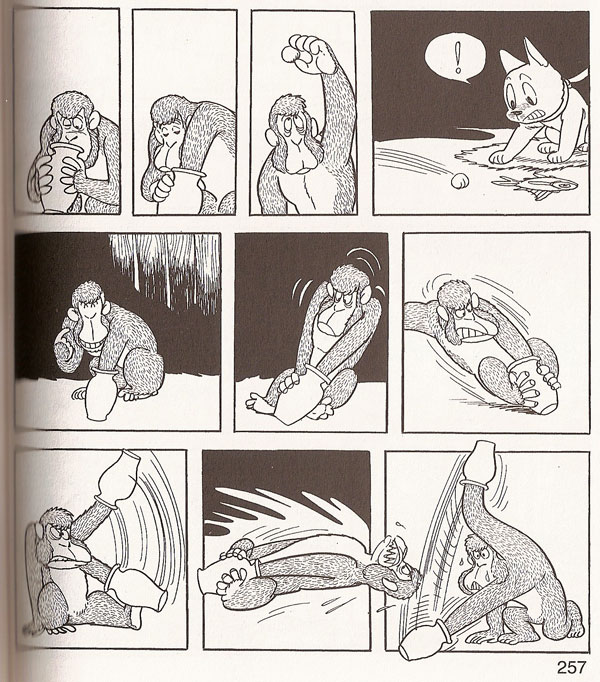 At the end of the story, Tezuka uses his cute animal style. Note how the early panels use a consistent point of view/composition for the monkey. When he switches to the comedy, the monkey is quickly moving back and forth, back and forth, with the horizontal in the middle of the last row, nicely framed by the semi-mirrored compositions of its adjacent panels. 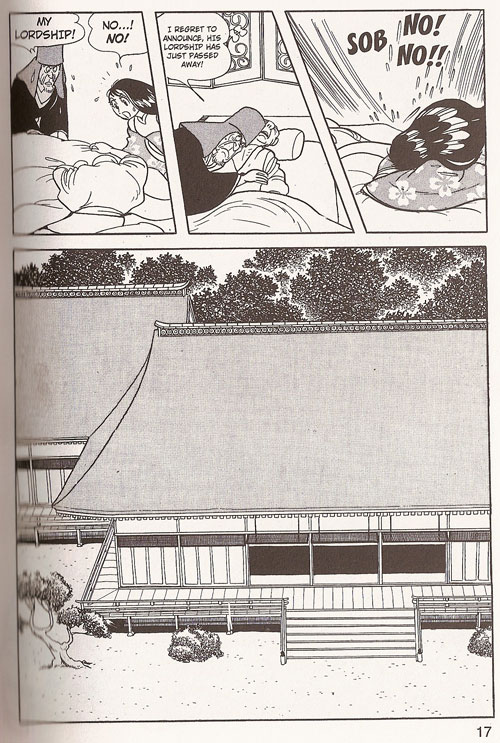 I love the transition in this page. One of the lords dies, and Obu breaks out in sobs (third panel). The next panel, a rather large one, shows what I assume is the lords house, devoid of any people, empty and silent. 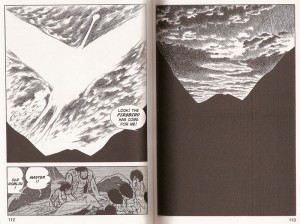 Another amazing landscape spread by Tezuka. As Gao dies (panel two) the image of the phoenix shoots across the sky above an interestingly shaped mountain horizon. The linework in the two skies is amazingly fine and contrasts so well with the huge black horizon. This spread always stops me in my (reading) tracks.