This weekend my wife and I took a trip to the Brandywine River Museum in Chadds Ford, PA (west of Philadelphia). Primarily known for its collection of Wyeth family work, the museum currently (until May 17) has an exhibit up entitled: “Elegant Enigmas: The Art of Edward Gorey.”

I’ve never been a huge Gorey fan, though I have had one of his collections for a few years, but this show made me one. The show itself was not very large in space, but you don’t need much space to show a ton of Gorey’s elegant little ink drawings. Most of the work was organized chronologically, primarily showcasing selected images/pages from the many books he published. Surprisingly, the original pen and ink drawings seemed to have been mostly drawn at the same size they were published. Gorey’s pervasive fine hatching is even more impressive as seen in the original works and made me realize how poor the reproductions are in my copy of Amphigorey Also, where they are a little grey.

While viewing the show, I overheard a couple of women talking. One commented, “there should be more storybooks for adults.” Thankfully, before I had to intervene (I don’t normally just talk to people in public, but some topics need addressing), another women brought up these things called “graphic novels.” Another added, helpfully, that they are like “comic books, but for adults.” Hadn’t the first women seen Persepolis. I loved the immediate shift by the same women from mentioning “graphic novels” to talking about an animation based on a book. Anyway, it was an interesting little exchange. Maybe I should have recommended some comics to the women.

I don’t hear Gorey’s work mentioned as comics much. I guess it’s a bit like talking about children’s books as comics, but Gorey’s works are comics, in my opinion, going by many definitions: iconic solidarity (check), visual-verbal blending (check), juxtaposition blah blah (check). Liminal to many people, I’d hazard, because the images are all single page images, and there are no word balloons at all. 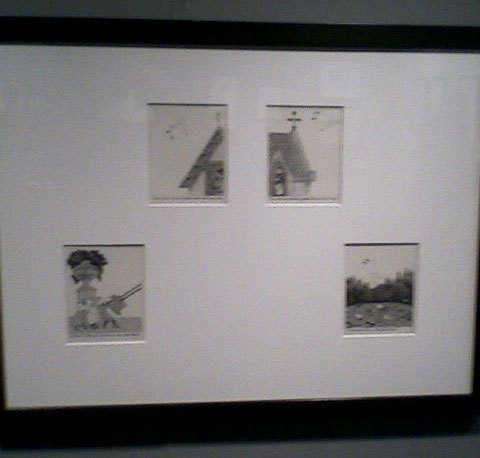 from A Limerick as displayed in the exhibit

One interesting piece in the show, actually did juxtapose four images from “A Limerick” (1973), putting them into one mat, and laying them out in such a way as to accentuate the movement in the panels (see above). The four panels start by showing three children about to shoot another into the air with some kind of large slingshot. The three subsequent images show the children flying up over two buildings and then down towards a pond. The curator placed the two middle panels higher in the mat than the first and last panels, echoing the child’s trajectory. 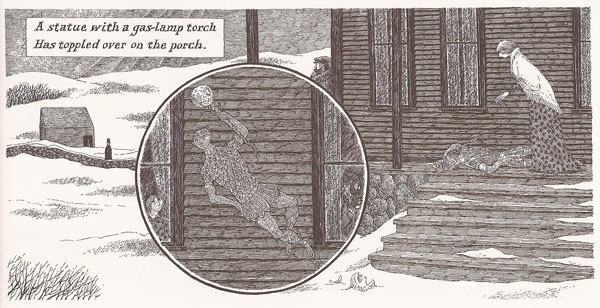 from The Iron Tonic

One of the more comics-like books, called “The Iron Tonic” (1969), features a series of long images with embedded circular panels in them. These embedded images often show details of the large images, but they also show moments in time previous or subsequent to the main image (see above). 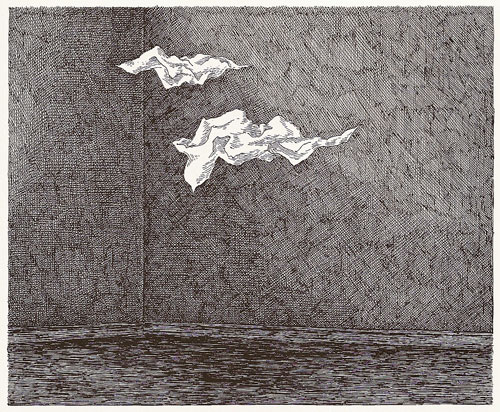 from The West Wing

Another book that caught my attention is “The West Wing” (1963) (see above) which uses no text and primarily shows images of empty rooms (a few figures do appear). It reminds me a bit of SPUK as well as the story I did in my Repetition Sound Appropriation mini. I chose the selection above because it immediately reminded my of John Hankiewicz’s work. I swear there’s an image of his with very similar clothes in them, but I can’t find it (so maybe I imagined it, or maybe it’s someone else’s work?). Instead here’s a panel from his “Amateur Comics” (in Asthma (Sparkplug, 2006)). 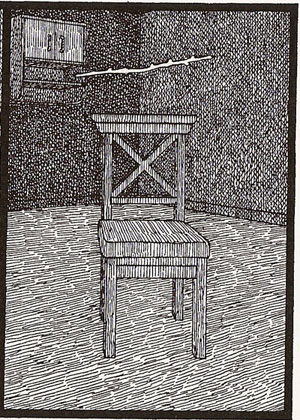 The catalog for the Gorey show, Elegant Enigmas: The Art of Edward Gorey (ISBN: 9780764948046), is quite good. The images are very crisply reproduced (much better than in the collected volumes of his available). The essay by Karen Wilkin offers a good overview, though I’m disappointed that the only mention of anything comics related is that Gorey owned some original Herriman art (though not from Krazy Kat).