I’ve been meaning to reread all the volumes of Osamu Tezuka’s Phoenix (Viz Comics) available in English and write something about the series as a whole, but having just rest the most recent two, volumes 7 and 8 (comprising two long parts of “Civil War” and the short “Robe of Feathers”) I decided to just point out a few general reasons I like this series and a few specific instances of interesting cartooning.

Phoenix is an epic of epics. The incomplete series consists of twelve stories which jump back and forth in time from the distant past to the distant future, slowly moving towards each other (and the present, which sadly was not reached before Tezuka died). As a whole the series is an epic of gigantic proportions, tracking themes and characters across centuries, but each individual story (well most of them) are themselves epic stories that can be read as singular entities (though much of the greater resonance of the stories is lost outside the context of the whole).

The stories in Phoenix are clearly held together by Tezuka’s Buddhist beliefs. The concept of reincarnation is the driving force behind the linked narratives. Again and again, across the course of the stories and the centuries, the same (or very similar) characters are found living in disparate times and places. All of them have some kind of crossing of paths with the mythical Phoenix, the immortal bird that dies and is reborn. Many of the characters strive to drink the bird’s blood and thus gain immortality. On the higher level, the reader sees these characters undergo the same death and rebirth as the Phoenix when we see the characters dying and living again as different people in the stories. Thus, this series can be read on two levels, as individual tales and as one large tale of humanity.

Tezuka’s humanist views permeate the stories with a sense of striving for the better, yet also admitting the great tragic flaws of humanity. The stories mostly end up as tragedies, yet one can’t say they are devoid of comedy also. One of the attractions of Tezuka’s work is his (often jarring) mixing of genres and modes. He can quickly change register from a tragic scene to light-hearted comedy, a transition that can be distasteful to those who expect a story to fall into one genre and stay there. Tezuka mixes tragedy and comedy, drama, action, and romance, historical fiction and science fiction. The historical fiction includes historical notes and dates yet Tezuka does not balk at using anachronism for (mostly) comedic effects (in “Civil War” the 12th century Japanese lords are seen communicating by telephone). It is a testament to Tezuka’s skill that he can pull off these sharp changes.

In a similar way his art veers wildly from the realistic backgrounds (particularly the beautifully detailed landscapes and buildings) to the Disney-esque characters and animals. Tezuka is a great user of caricature in his characters, using a variety of strange looking faces and bodies that have a wide range of emotional expression.

“Civil War”, which covers all of volume 7 and most of volume 8, tells a long historical tale of unrest in Japan during the 12th century. The emporers, lords, and samurai play prominent roles as do the wars and political machinations, but amidst this larger backdrop are the main protagonists who run through the story not as constant players who shape events, but as emotional beings who run against the clear cut divisions of clans and politics and come and go as needed.

I wanted to point out two small examples from “Civil War”.

I’m not usually a big fan of diagonally shaped panels. They often fit on the page poorly and can be overused in a way that cuts down their potential to offer a dramatic shift from the expected rectangular panel. But, in this example Tezuka uses the diagonal panel and word panels to lead the reader through the page in a very specific way that increases the sense of movement of the characters. Not how the woman’s balloon in panel one leads down to her balloon in panel 2 (which just edges into the gutter). Lead to this balloon we then have to read up/back in panel two to reach the man’s balloon. This backwards reading coincides with the woman’s looking back. The word balloons then lead us to the man’s balloon in panel three, juxtaposing the character in two different sizes, which helps reinforce the distance that is being created between him and the woman in her carriage, which moves off the page. 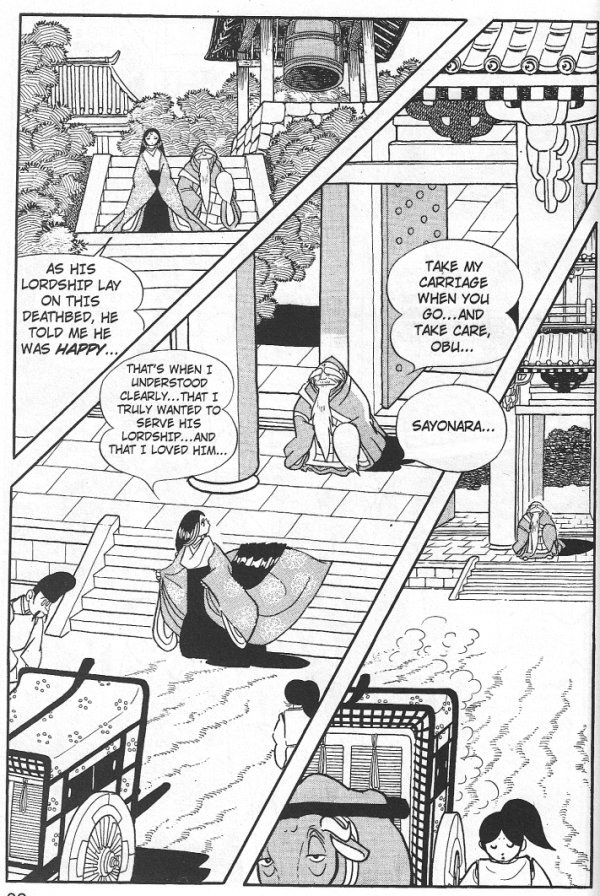 The second example covers a number of panels of warriors slaughtering other people. Tezuka strengthens the swinging swords of the warriors cutting people in two by cutting the panels in two, an interesting effect that I don’t recall ever seeing before. 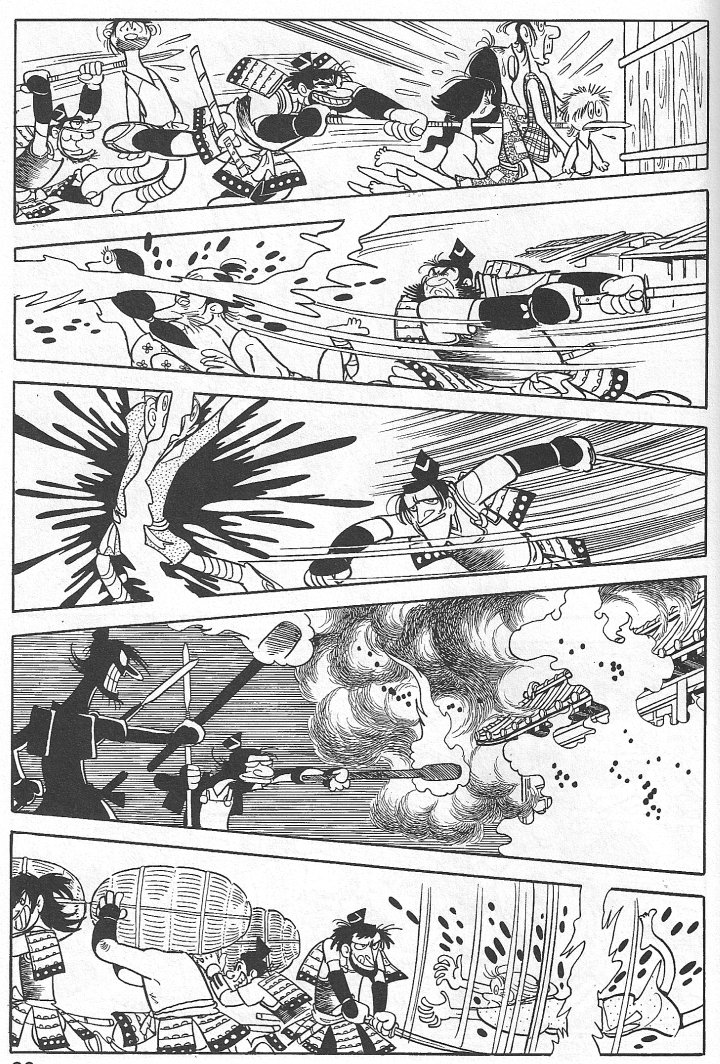 The short story “Robe of Feathers” that ends Volume 8 is interesting for its use of narrative within the narrative and a fixed background. The story takes place as a play within the comic. Tezuka, for all but the opening and closing pages, uses a fixed unchanging panel size and an unchanging background to those panels. The characters move across the background as if the reader were watching a play.