“Nostalgia” originally appeared from 1976-1978, five years after the previous Phoenix story, “Robe of Feathers.” It is another futuristic story, which, according to that handy chart in the back of the books, takes place approximately in the 25th century. This is one of the only stories that does not give an explicit date at its beginning.

The story begins with George and Romy, a young couple, arriving at a planet called “Eden-17” with their space realtor, a half-fox looking guy. They have bought the planet as a place to live after fleeing Earth. The planet’s name becomes a bit of irony as it turns out to be a dud, lacking water and traversed by storms. After only a day, George is killed (a water derrick falls on him and then he drowns), and Romy is left alone, pregnant, with a robot.

Then Tezuka heads into that place he goes occasionally where you begin to wonder how the hell he comes up with these ideas. Romy has her robot build her some kind of cryogenic sleep chamber. She goes to sleep, leaving the robot to care for her son because she wants to wake up when he is older have children with him so that humans will not die out on the planet. It’s completely nuts, but it points to the anthropocentric viewpoint that crops up in some of these stories. Humans must survive!

So Romy sleeps then wakes up and has children with her son (who Tezuka decides to name Cain), except they are all boys, so she has to go to sleep again. Then she wakes up again and has children with her own children/grandchildren (yes, the content warning in the front cover tells us there will be “incest”). But, again, only boys, Romy can’t get a break, yet for some reason she is very determined.

And this is where the phoenix intervenes. It decides to help the “poor, miserable people” on Eden-17. The phoenix gets an alien, a moopie (remember those shapeshifting aliens from way back in “Future”), to go to the planet and mate with one of Romy’s children/grandchildren. And thus a new race is born to populate the planet.

Before this happens the phoenix visits Romy in a dream as she sleeps. The conversation is weird. The phoenix asks Romy if she “likes” the planet and her response is “of course I do, this is where my husband George is buried.” That is an excellent reason to love an earthquake ridden desert planet. She adds, “This planet belongs to George and me and I can’t die until my descendants populate it.” (116) A fine capitalist reason. The logic of all this does not work for me, it seems all very self-centered and selfish on Romy’s part, yet the phoenix helps her. In this story, rather than a mythical beast, a cosmic force, or a divine arbiter, the phoenix is more like a sympathetic mythic deity who interferes in human concerns for no clear reason.

So the half-human/half-alien people populate the planet with Romy as their queen figurehead, until one day a young (and very annoying) kid name Kom has his (her?) day of “duty” to serve the queen. She tells him about Earth and how she wants to see it just one more time. And so begins the voyage back to Earth. Kom finds the cosmic rock spaceship that brought the first moopie to mate with the humans and somehow it flies off into space.

The space voyage sequence goes on about 100 pages as Romy and Kom make new acquaintances, visit some crazy planets, and finally get to Earth. Among the people they meet is Makimura the space pilot who I’m all but definite is the same character as seen in “Space” (I’m assuming this is before he became immortal). The planets they visit all look wonderful and benign and then end up being crazy and dangerous (electrified planets, planets with living rock and mud monsters, etc.).

When Romy finally gets to Earth, she discovers that all returning colonists are shot down if they try to get to the planet. She and her companions must make a deal with a shady merchant (who looks like a rat man, so you know he’s trouble). She is almost dead from one of the crazy electric planet, so the rat man uses some kind of technology to revive her. Of course, the side effect is rapid aging (a delightful opposite to all the immortality in this series), and in exchange Kom lets on where his mother the moopie lives (rat man wants moopie for something).

They sneak on to the planet, only to discover that it is a mess and the beautiful nature Romy remembers from her youth is mostly gone. Illegally on the planet she and Kom, in fleeing police, even end up swimming through sewage and getting attacked by future sewage rats. They are briefly aided by a robot (Chihiro model just like in “Resurrection”) and a weird biker and his girl named “Fox” and “Rattler Sally” (?!). Alas, Romy finally gets to see some nature just before she dies.

Tezuka has an environmental theme going through this story. Despite the ability to go to other worlds, Earth remains the home planet, the one that Romy (and evidently many other space colonists) has “nostalgia” for. While other planets may look as nice as Earth, they never are as hospitable to people (in fact all the ones we see are outright hostile). Tezuka reinforces the issue by having Romy live long enough to remember the natural environment from her youth and return to sewage and deserts and lakes that have been made into swimming pools. The struggle for the humans to survive on Eden-17 and their need to mate with aliens also hammers in the idea that humans and Earth are supposed to go together.

I am recounting a lot of plot here, but, what can I do? A lot goes on in this book. Even after Romy’s death, we see what happens to her ancestors on Eden-17. The rat man merchant shows up and because they are all so good and not interested in buying stuff, he puts some kind of drug in their water and in six months turns the whole civilization into crazy gambling, consumerist, gun wielding maniacs. So the phoenix decides to stop protecting them and a giant earthquake kills everyone.

Makimura arrives last at Eden-17 to bury Romy’s body (which he somehow took off Earth). He even has a monologue about The Little Prince (groan)… and then we get ghostly floating dialogue of Romy and her long dead husband George talking to each other. Shouldn’t they be… reincarnated into something else? Does reincarnation not work in space?

“Nostalgia” starts out weird and crazy and ends up weird and cartoonishly absurd (yes, I do feel guilty using “cartoonish” in such a negative context). Some of this Tezuka seemed to be making up as he went along, some of it is being forced a little too much into a message, and some of it is just plan ridiculous. And through all this, the issue of “how to live life” is not addressed beyond a base survival instinct. Even pleasure does not enter the equation, as Romy’s whole live is consumed by survival and sad nostalgia. If I were on a distant planet like that, I’d just let the humans die out, me included. 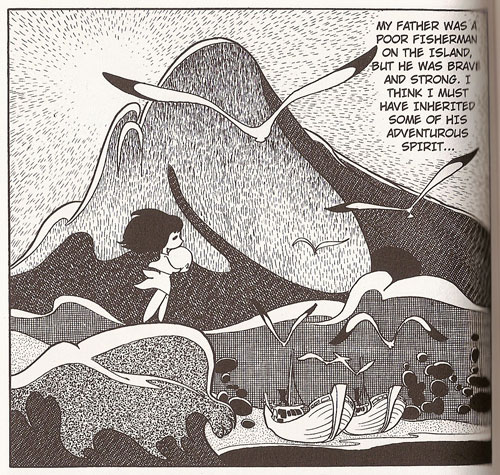 For Romy’s remembrances of her youth on Earth, Tezuka switches to a flatter, textured, abstracted style, that looks both dreamlike and storybook-like. 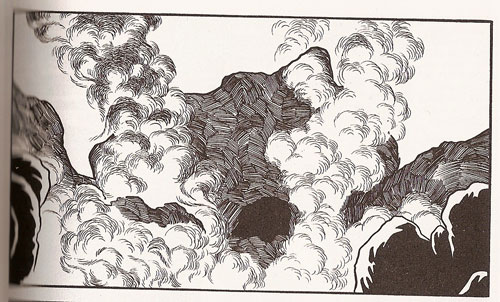 A lovely almost abstract landscape. Great use of texture, contrast, and space.