It may seem I’m posting out of order, skipping from Volume 5 to Volume 8, but this disorder is created by Viz, not me. The story in Phoenix which followed volume five’s “Resurrection” (1971) is “Robe of Feathers” (1971). Since this latter story is only 47 pages long, Viz ended up publishing it at the end of the second volume of the story “Civil War” (1980) which comprises volumes 7 and 8 of the Viz series. I decided to post in the original story order, so I’m going to discuss “Robe of Feathers” here and next time will discuss Volume 6: “Nostalgia”.

“Robe of Feathers” is the shortest story in the Phoenix series and also one of the most out of place. None of the characters, as far as I can tell, carry over from other stories or seem to exist as reincarnations of familiar figures. The phoenix itself appears only as a creature in a story told by one of the characters, and there is very little to be said on it’s thematic relation to the overarching concerns of the series.

This story is one of the past stories, dated in the master chart of the series as 937 AD. “Robe of Feathers” exists as a story within a framing device. The majority of the story exists within the frame of a play performed for an audience. The time period at which the play is being performed is unclear. At first I thought it was in 937, but I think I see men in sailor suits in the audience, so perhaps the play is being performed in a modern time, and it is the play itself which is set in 937.

The narrative frame provides the strict compositions of the panels. Other than the opening and closing two page spreads, the whole story is shown from a fixed viewpoint using a fixed setting. The opening spread shows a crowd in front of an outdoor theater building. A curtain closes off the stage. The closing spread is identical to the opening spread except for a single “gong” sound effect. In between the story uses a steady layout of four horizontal panels showing the events on the stage, which holds a single tree and the edge of a house. 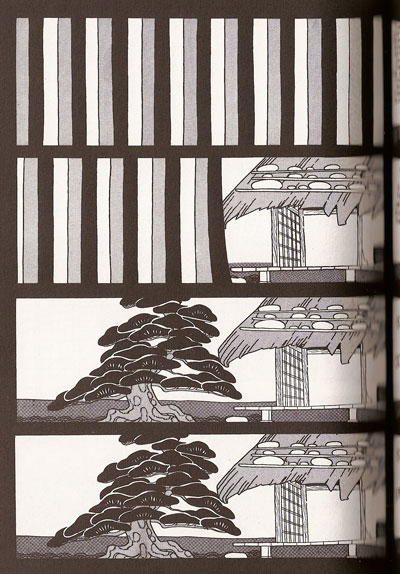 The curtain opens on the stage at the beginning of the story. Tezuka uses black margins and gutters for all the pages except the opening and closing spreads. This black frame creates a sense of enclosure. The world outside the stage is blacked out, attention is focused.

The events of the story are performed by a few characters/actors moving onto and off of this stage. There are no close-ups or alternative points of view. The only thing that changes besides the characters is the use of lighting. Sometimes the stage goes black. At other times, the lights are dimmed and a spotlight focuses in on one of the characters. 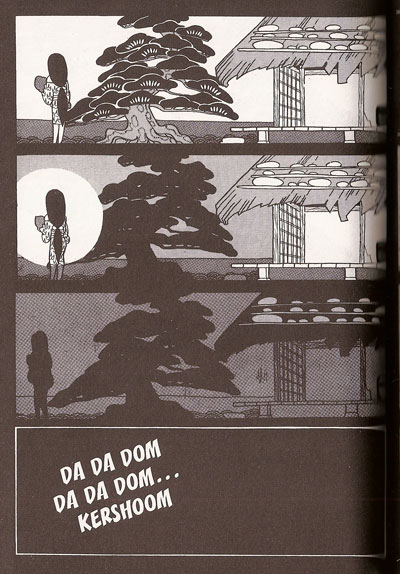 The woman stands with her child. Lights dim, a spotlight is briefly focused, and then darkness envelops the stage. A few of these moments of darkness are used to indicate the passage of time.

The story/play itself tells of a young woman who arrives at a house on the shore. She leaves her “robe of feathers” hanging on a tree while she swims in the ocean, and the peasant who lives in the house takes her robe. He forces her to stay with him for three years at which time he says he’ll return the robe. Rather unbelievably, she not only agrees to this, but she has a child with him, too. When samurai come to draft the peasant into the army, the women gives them the robe (apparently she knows where it is) as a bribe.

As it turns out, she is from 1500 years in the future and was told that anything she leaves behind will change history. The peasant goes after the robe. Alone with her child, the woman describes the war torn future she came from and how a flaming bird granted her wish to escape by sending her into the past. The woman waits for the peasant and after some time assumes he has died, so she takes her baby and goes back to the future. (How exactly she does this in unexplained.) At the end, the peasant returns, dying, and buries her robe in the ground so no one will get it.

The peasant and the woman from the future both spend time lamenting the tough times they live in, the war, the poverty. Yet, it is hard to feel sympathetic to the peasant. He uses the tough times as an excuse to make the woman stay with him, calling her an angel. He wants to keep her around so he will be happy and work harder, with no regards for her feelings. In short, he’s basically a thief and a kidnapper. If his final death scene is an attempt at tragedy, I find it hard to feel. As inexplicable is why the woman doesn’t just take her robe and leave while he’s out working. Clearly she knows where it is, since she retrieves it when the soldiers come to draft the peasant.

I’m not sold on this story, and I find it of little relation to the rest of the series. It is slight and mostly interesting for its strictly fixed compositions. Every series has to have a low point, this is it for Phoenix.