This abstract comic is in L’Association’s “patte de mouche” series of small comics. Like a professionally published minicomic, the book is about the size of a quartered piece of paper, printed in black on off-white paper with a thicker, rougher cover printed in two shades of purple. This series, at least the ones I’ve seen, tend to be short, experimental comics.

In this case, Swiss artist Baladi has drawn a brief abstract comic about a “small line” (that’s the title). The comic amounts to the voyage of a short line through a series of encounters with other lines of various size, shape, and density.

One the first page, the line seems to peel off from the border of the panel. The first panel is just an empty frame, while the second is empty except for a single curved line which starts as part of the frame and moves into the panel. On the subsequent pages that line becomes the focus of the panels, alternately differentiated and absorbed by the other lines in the panels. First that line goes in an perpendicular direction to the field of lines it passed through, later it disappears into a twisting series of lines that look like veins or rivers. The line becomes squiggly for awhile, it becomes split in two and we briefly have two lines to follow (until the second is absorbed by another scribble).

Petit Trait is a simple exercise, primarily of interest for the way Baladi can maintain a sense of character/figure for the small line against the ground of the rest of the lines and for the way he uses the placement of the line in the panel and the sequence of panels on a page to create the illusion of the line moving through space, despite the lack of any representational sense of place. 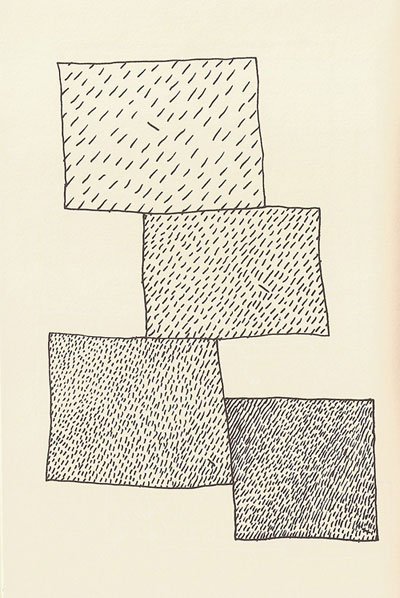 In this page, the primary line is differentiated by direction. Even in a a field of almost identical lines, it can still be followed. Throughout the comic, with the exception of the sequence where the line is briefly absorbed by a dense thicket of lines (and then breaks out), this line can be followed as the character/figure. 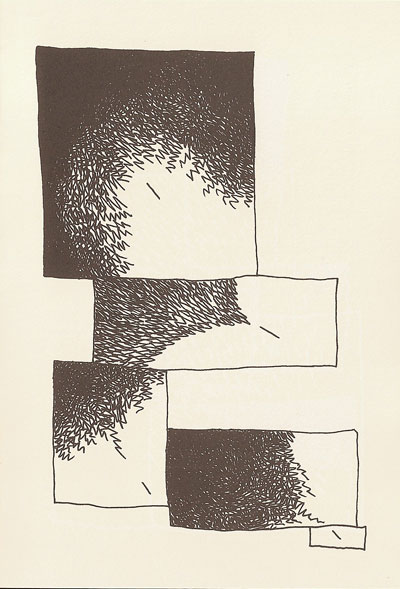 On the whole it’s not very exciting. It doesn’t have the variation of Trondheim’s Bleu nor does it have the density and aesthetic power of Molotiu’s work. And, as far as other abstract comics go, it pales in comparison to what I’ve seen of the Abstract Comics: The Anthology, out this past Wednesday from Fantagraphics (Disclaimer: I’m in it, and yes, the timing of this post is a blatant excuse to promote the book).

Baladi has had one book published in English, his Frankenstein Now and Forever (definitely a narrative/story comic) from the possibly defunct publisher Typocrat (who also put out 676 Apparitions of Killoffer).