The doppelganger has a long history in literature, from Poe and Dostoyevsky to Auster and Murakami–even comics characters like Superman or Spider-Man. At its most basic, a doppelganger is a double, an alter ego, usually representing the subconscious or repressed portions of the personality. Often the doppelganger acts out the moral or immoral side of the personality, like the little angel and devil that perch on the shoulders of cartoon characters. The idea of a “double” implies “two.” In his Six Hundred Seventy-Six Apparitions of Killoffer, French cartoonist Killoffer doubles to excess, and those hundreds of doubles in turn act in excess.

The book starts out as a travelogue. Killoffer is visiting Montreal. He’s women watching and making observations about travel, women, and humanity, but he is also guilty about the sink full of dirty dishes he left in his apartment in Paris and the possible things growing there.

Killoffer’s oversize pages are laid out in such a way that the images all flow together. He only uses panel borders in the opening sequence, a dream, and the closing sequence (which doubles the opening). The rest of the pages are border-less, flowing together in a way that at first disguises the main conceit of the book.

When using large open layouts like this, one way to create a sense of movement and consistency is through repeated images of the character across the same background–sometimes used (in superhero comics at least) to show a character through different parts of some complicated movement. Killoffer uses this tactic, showing, for instance, the apartment Killoffer is staying in as one large image with the character repeated in different parts of the room. What becomes definitively clear only after a few pages is that it is not one Killoffer, but, rather, many Killoffers. The style of layouts allows him to show the same character repeated without clearly indicating that it is multiples of the same character. In a comic with panels it would be more immediately obvious that the two identical figures in a single, bordered panel are really two separate figures. Here it is not so, and it plays cleverly with the story itself. 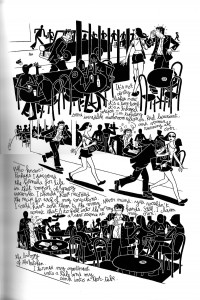 The dopplegangers (apparitions) start out as almost identical to the “original” Killoffer, but they quickly begin to differentiate themselves (from him not each other). While Killoffer, in his narration which goes on for eight of the first ten pages, describes himself as “lazy”, the doppelgangers lay around, half or un-dressed, and leave dishes, food, and trash everywhere. Killoffer talks about feeling guilty for looking too long at the Canadian women he sees on the street; his doubles pick up women shamelessly. The doppelgangers soon become dangerous not only to Killoffer but to others. The book turns brutal as Killoffer first tries to escape these physical embodiments of id, then turns to stop them. They are the violent hidden part of humanity and the artist brought to life.

Killoffer’s art has a powerful visual impact. He uses a lot of black and no tone or shading. Unlike many artists working in black and white his drawings are as much drawn in white as black. White lines are as important as black lines, and all are mostly unvarying in width, which, along with the liberal black and white shapes, gives the art a forceful but flat appearance. The drawings are realistic if simplified. I must note that he draws himself with a brow that obscures his eyes, creatng a bestial, caveman-like appearance.

This book is probably the best example I’ve seen of this type of open layout (that is, using neither conventional panels or gutters). The skill with which Killoffer uses the whole page compositionally and narratively is impressive (and worth the price of admission alone). The pages are clear to follow through the story, but also visually exciting and full (the excess of the doppelgangers is often visually mirrored by an excess of visual elements on the page). He makes great use of repetition of either background or figure (often both) on the same page to show movement and the passing of time.

Killoffer’s Six Hundred Seventy-Six Apparitions stands with the best of the doppelganger stories, not only as a visually inventive comic, but as a powerful story about the dark other of ourselves. It is always great to see more bande dessinee making its way to the English readers, and I hope to see more from Typocrat Press (this is only their second publication).