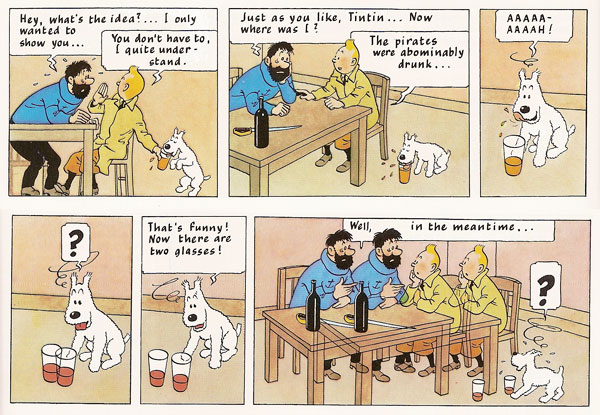 An interesting, though not unique, case of point of view/perspective in comics. Here we have Snowy getting a drink of Captain Haddock’s whiskey. In doing so, he ends up seeing double. We are effectively seeing what Snowy sees, but we are not seeing it from his point of view. We are both outside and inside the character at the same time.

I’ve written at length on point of view in comics which use a kind of “first person” perspective. The combination of focalization and ocularization allows for a variety of effects related to “who knows” and “who sees.”

What Francois Jost’s writings on ocularization don’t address, in the works I’ve read, is the idea of how subjective ocular effects inter-relate with focalization and ocularization. In the example above, how does us seeing Snowy and seeing what he sees in the same panel work.

It does appear that Jost and André Gaudreault address something similar to this issue in their book Le Recit Cinematographique (Nathan, 1990). I found a brief reference in Ann Miller’s Reading bande dessinée : critical approaches to French-language comic strip (Intellect Books, 2007) — which by the way is well worth the read — to this idea:

Gaudreault and Jost identify a subcategory of ocularized shots which bear traces of the subjectivity of a character through deformation (blurred vision indicating grogginess, for example) or partial masking. Subjectivity may further be extended through images which represent purely mental processes such as dreams. In this case, they argue, the status of these images will be made clear by “modalization operators”, such as fades to black or dissolves. (106)

Though it is not clear if they me shots that are ocularized through a particular character or something akin to the panels above. Time for more research.

Perhaps this type of image has the same status as a thought balloon, a visual representation of an internal process.