This second translated volume of Manu Larcenet’s Ordinary Victories (Le Combat Ordinaire) from NBM includes volumes 3 and 4 of the French version. As I’ve already written about Volume 1 of the English translation and Volume 3 of the French edition (the first half of this translated volume), I can’t say I have a lot to add on the macro level. I’d suggest reading those previous two posts first. Rereading them now, I see my opinions haven’t changed.

This volumes concludes, I believe, the series. The story ends on a moment of limited closure, an affirmation by Marco of his life, his art, and his family. The plotlines are not all cleared up (Marco’s brother’s struggles remain an open question from the original volume 3), but that lack of complete resolution fits with the books episodic life-like plotting.

Outside of discoveries from my previous readings, what stuck out to me in this volume? A few things.

Much credit to colorist Patrice Larcent (Manu’s brother). I realized how much the color adds to the art in realism, setting, and emotional weight. Patrice primarily uses warm, earth tones that complement the often grey view of life seen in the story. Manu’s linework can be rather weak (particularly in scenes that do not require areas of black, where his brush shows much expression and texture), and the colors really fill in the images and fill in the world of the story.

The above strip is a subtle little sequence. We see Marco’s mother in his father’s workshop. Marco is working on cleaning it out. Over the three panels here, the items in the background of the first panel fade away, becoming a series of brush slashes like a shadow on a wall, and then disappearing all together. The effect neatly mirrors the the cleaning out of the surrounding scene and also echoes the father’s life disappearing, memories fading.

At times the art overdoes the visual-emotional connection. This brief sequence finds Marco smoking outside after a fight with his girlfriend about having children. Naturally, his father comes to mind, and he appears as a kind of ghost in the second panel, a leap into the Marco’s visual world or a projection of his thoughts visually (like a thought balloon except integrated into the diegetic world). This pairing alone conveys Marco’s emotion and thoughts, his troubled relationship with his father as an analogue to his concern about himself having children. The third panel, with its slash of red and Marco’s despairing posture, is an over-dramatic addition after the quiet subtlety of the previous panels. Larcenet ups the drama like this a number of the times across the course of the comic, often reaching further than he needs, considering his skill. 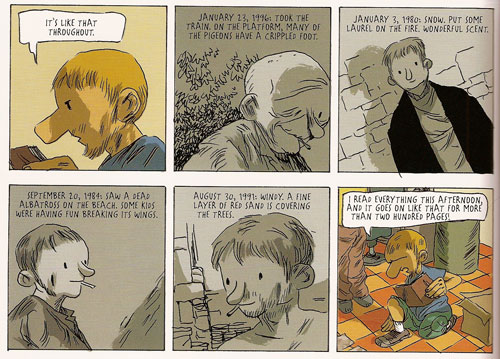 This sequence is, in a way, similar to the Mushishi pages I wrote about the other week yet also different. In panel one we see Marco reading his father’s journal. Panels two through five feature narration directly from the journal. We assume this is being read aloud by Marco (in panel one he is talking to his girlfriend, Emily, seen on the previous page), though it is a rare occurrence of dialogue outside of word balloons in the comic (the closest thing being the internal monologue featured over pages of Marco’s photos (which I talk about in my other posts about this series)). The images accompanying the narration show Marco’s father at different stages of life. It is easy to assume those images illustrate the narration, yet the dated entries and the varying ago of the father in the pictures do not match up.

In panel six, though, we see Marco crouched on the floor, laid out in front of him are old photographs, which were in the same box as the journal. That these are photos is explicit on the previous page. This leads to the conclusion that the images in panels two through five are some of the photographs on the ground. We might say that this puts the reader in the interesting position of Emily in the scene, looking down at the photographs as Marco reads from the journal. This is an unusual visual tactic that steps outside the normal flow of the story. 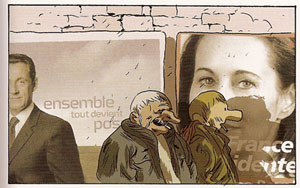 This is an odd panel where photographs have been montaged into the background. Larcenet’s works the 2007 French presidential election into the story, and this image finds Marco and his friend walking along a street plastered with campaign posters. Nicolas Sarkozy and Segolene Royal, the two major candidates, are seen in photos in the background. The photographic adds a shocking sense of reality to the story. The reader is suddenly reminded that the election is a real and (relatively) current event. This is surprisingly effective and subtle (the photographic imagery is part of only a single panel and the colors have been carefully integrated to help the photos blend).

I just had to share this panel, a beautifully simple panel drawn with a dense scribble and a field of loose quick marks. The subtle shift in size of the line of vegetation creates a sense of depth, while the single vertical tree adds a bit of compositional variation and makes the image comprehensible. Without that tree we might be confused as to what the image is really portraying.

I’m also continually amazed at the contrast of style and thematic seriousness in Larcenet’s work. His characters are caricatures, small and out-of-proportion with higher abstracted facial features, yet like much great cartooning, they can hold a seriousness and weight that might be impossible with a highly realistic image.

Ordinary Victories 2 is one of those books I should have included on my best of list for 2008, but which I hadn’t reread in quite a while.