My review of Yuki Urushibara’s Mushishi (Del Rey) last week was primarily a broader discussion of the series. I didn’t get into any particular images or pages. I did have two pages marked that I wanted to return to, because they offer some examples that I thought were worth sharing. 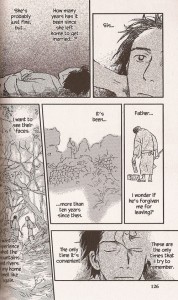 Here we have an artist, who left his home at a young age to work as an apprentice, thinking about his family. Urushibara doesn’t use a lot of interior monologues like this in the series. Most of what we know of the characters comes from dialogue and action (Ginko, the protagonist, in particular is always externally focalized). In this case we have a rare case of internal monologue, basically the equivalent of a thought balloon, though without the balloon. This is accompanied by images that are in the head of the thinking agent (in this case, the artist). This is not a rare occurrence in comics, though I don’t think it is common either. We might read this as a flashback, except the images are not set in any particular time, event, or action. These are generalized pictures the character has in his mind of his family, images of memory. Urushibara emphasized the distance of the images, by making them less solid, less detailed, and less varied in shading that images that exist in the normal flow of the story.

Panel three (reading right to left), showing the father in isolation, pulls the man out of any setting and makes him more distant by turning him away, emphasizing not only the distance of time/memory but also the emotional distance of the father in the past (which we know from the accompanying text about not being “forgiven” for something).

Panel four removes much detail from the scene and also has the image floating in the middle of the panel. The single uniform tone that covers the whole scene makes it look faded and blurry.

Panel six (the long one at the left) shows a slightly more detailed scene than the previous one, filling up the panel and using a small bit of tonal variation. This last panel has a greater solidity to it, which aptly fits the importance in this story of the land–the mountains (as noted in the text)–that the artist left behind. The story is primarily about the effects of the mountain (or lack of the proximity to the mountain) on the artist and his village, in the form of mushi. 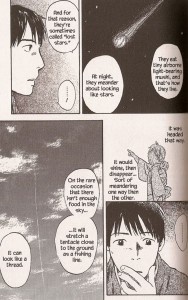 This page starts with Ginko telling a young man (seen here) about a mushi that has affected the young man’s fiancee. Those are Ginko’s words in the first and last panels. The first panel is a visual representation accompanying Ginko’s talk. It’s not really in the diegetic world of the story. We might say it is the young man’s idea of what Ginko is describing, though it seems too specific for that, or it might be Ginko’s thoughts as image. It is ambiguous in that sense.

Panel three shows us an image in the young man’s mind. Like a closed point-of-view shot, the panel is preceded and followed by close-ups of his head/face. The word balloons containing the line of dots emphasize his surprise which connects Ginko’s story to the image he thinks of, a kind of internal “looking”. Panel three is not just imagination though, it is a memory flashback to an earlier scene in the story (we can find the same text as spoken by the girl). Once again, Urushibara fades the image by removing all background imagery and using a single uniform tone on the girl.

Panel five returns us to Ginko’s story and another illustration of his speech. These images take on the place of a extra-diegetic narrator, that is, a narrator who is not in the story itself. Or we might say it forms a intra-diegetic narrative as told by Ginko, a comic within the comic? I’m not sure what to call it, but it is not a conventional shift in linear time or space, nor can we clearly consider it as a kind of visual thought balloon, which might be an apt way to describe panel three on this page (a thought panel?).