This is going on my best comics of 2009 list, no question. Jason Overby impresses me more and more with each new comic of his I see. (Beautiful piece in the Abstract Comics anthology, by the way.) I’ve been sitting on this one for quite awhile, as I wasn’t even sure where to start writing about this (long) minicomic. I always seem to have that problem with comics that really impress me.

Exploding He[a]d man (It’s “Hed” on the cover and “Head” on the title page) is a long 96 page black and white minicomic that plays off the superhero genre. I know I just wrote the other day about outlawing superhero parodies, so I feel obliged to note that while Overby here uses elements of the genre, his sole purpose is not parody. Plenty more is going on.

The titular character (who is never referred to as such in the comic) is a Sluggo looking guy who somehow (“exotic chemistry”) ends up with a wick sticking out of his head, making it look like a cartoon bomb (the kind black hatted anarchists would throw). He has that origin story, as well as an arch-nemesis, a guy who at the beginning of the story he beats up on the beach (perhaps referencing the old Charles Atlas ads). There’s even the classic Spiderman-esque sewing of the costume scene.

Once he’s got his wick/bomb head, he moves to a life of crime. This life of crime revolves around the idea of inaction. He robs a bank by threatening to light his wick and blow up. It is by not acting (lighting the wick) that he succeeds (“liberate myself from the tyranny of action”). Though, this inaction is in itself action (he’s acting by threatening, by putting himself in the bank), it’s over a quite different sort than most “action” stories. He is confronted by his arch-nemesis (who at one point rides around in a mechanical cowboy), and they have a showdown in a bar, which mostly involves talking. The basic plot fits cleanly into the genre mold, but this is stylistically and thematically about as far as you can get from something coming out of Marvel or DC. 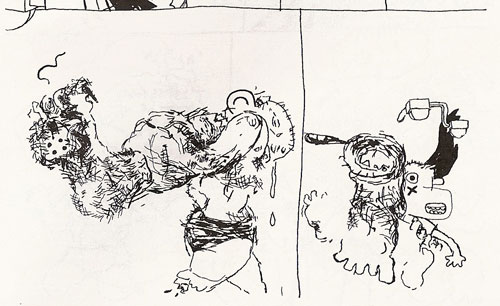 Unlike many comics, you’ve really got to work at reading Overby’s comics. There’s no easy way to breeze through these panels and pages, you have to decipher the images in light of what came before. Even the word balloons are often drawn as rebuses rather than text. Tiny sequences of images with the larger sequences of images. I’ll admit to being stumped by some of his rebuses (with each rereading I think I’m understanding more of them), just like I’m occasionally completely stumped by a panel, unable to figure out what it’s supposed to be communicating. In many comics, I’d be ready to blame the artist, but with Overby, I end up blaming myself: I’m not paying close enough attention, there’s some detail I missed earlier that would make this make sense, it’s an abstract image not meant to be deciphered. These hard to decipher images are a challenge, a call to reread and rereread, hoping (and, so far, succeeding) each time to get something new out of the panels. 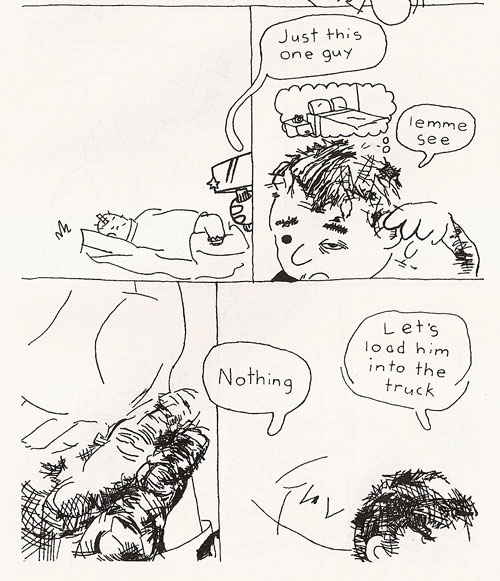 Tired EMT is wishing he were still in bed.

Most comics art is founded on consistency. The character must always look the same (be on model) or else the image is wrong or bad or unskilled. Overby somehow manages to maintain consistency in inconsistency. His images stay within a certain confines of medium (black lines), but vary greatly in detail, weight, movement, flow. One panel may be an almost geometric rendering of a character, another is a chaotic mass of lines, another a hatched close-up of a face, or an almost bare panel marred only by a few wispy marks. Characters are identifiable primarily through context or very specific visual traits (the wick in the guy’s head, the bandages on his nemesis’ head).

Text is used in all sorts of ways, from thought balloons, speech balloons, and narrative captions to description, sound effects, and diegetic text. One panel has a dotted outline of a rounded rectangle within which are the words: “This is a cement mixing truck depositing its eponymic contents into a hole along a stretch of sidewalk.” We never “see” the truck at all, but who needs to, it’s background, it’s peripheral. An early scene has a couple EMT’s coming to rescue the man–after his exotic chemistry origin explosion–and Overby works the “Siren” sound effect into the panels in all sorts of variations, styles, twisting it around, small, large, even at one point having the “N” in a blocky version of the sound, hit the character in the head to wake him up from unconsciousness. 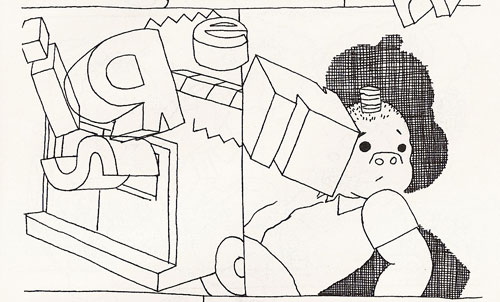 Sluggo-looking protagonist, here rendered sparingly, is woken up by the siren.

A few times during the comic, Overby steps in as the author-narrator to offer a meta-commentary on the pages. One page, he tells us, shows the same events as the previous page: he drew it twice and liked both so left them in. In another sequence, he tells us that the next two pages are just a slow motion reply of the single preceding panel (it’s an important scene at the climax of the plot). These intrusions do, to a certain extent, break the narrative [suspension of disbelief], but I don’t see that as a detriment. The comic is such that it is not leaning towards traditional realism anyway, you can’t not think of it as a comic, as a work of art. 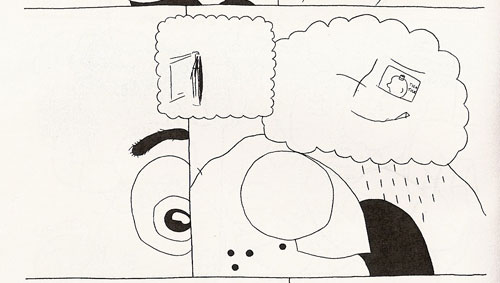 Out of context these panels are almost incomprehensible. Click to see the full page/context.

Comics is, almost inherently, an art of leaving out, of reduction, and Overby pushes at the limits. At what point is an image incomprehensible? Out of the context of a page or a series of pages, some of the panels in this comic are abstractions, shorn of any conveyable information or representation (though not aesthetics), yet, when placed as part of a sequence of panels, the image takes on meaning and significance. A wonderful example of iconic solidarity. Overby also will frequently just draw less. A panel will show only part of a character–glasses floating in the air–or a scene–a few lines to show the edge of a bar–leaving the reader to fill in the rest. This reduction of stuff gives many of his pages a lighter, open composition, that belies the density of the interpretation that goes on in the reading.

Oh, and I shouldn’t neglect to mention there are some really funny parts to this comic, often in conjunction with the rebus speech balloons. As you decipher the images, the humor breaks through.

I encourage you to order a copy from Overby at his website. While you’re there you can download some of previous minicomics I’ve reviewed such as Solipsist’s Doodles and Jessica.

[This is part 10 of a 30 part series where I am writing daily reviews for the month of December.]