McShane, James. Archaeology. Self-published, 2009. (You might be able to get a copy from him through his blog, though it is an edition of 100, so it may be gone by now.)

Back at MoCCA 2006 I bought one of James McShane’s tiny minicomics and never did get around to writing about it. Here’s another one, hot of the presses. A tiny (2.5″ x 4″) but very thick (about 80 pages) comic that’s been hand bound and cut with a power tool of some kind (it has a fuzzy edge from the cut). Each page has a single panel, mostly wordless. 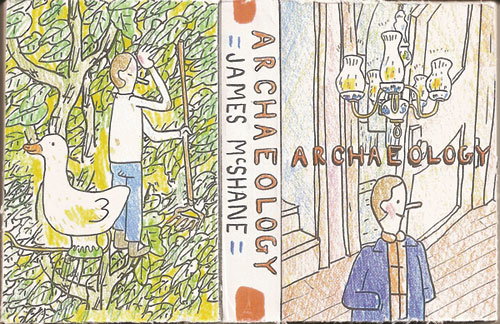 McShane’s narrative is elliptical, though it starts out straightforward enough. James gets a phone call asking him to come help “pack up the house.” We see his partner (so I’ve gathered from his other autobiographical comics) and him on a plane going somewhere (to the house, I assume). From here it gets more narratively abstract. No other characters ever appear (who made that call?). Almost no dialogue (one scene with James popping his head up into a dusty, empty attic wondering aloud what’s up there).

Most of what follows are images of a house, external and internal. Rooms and doorways–lots of doors and doorways often with the point-of-view in the panel looking through a doorway or partially open door–proliferate. The rooms are not empty, we still see some furniture, a telephone, notes attached to a board, but they are not crowded. A few images show the outside of the house, a hose, a driveway, a tree.

Archaeology has few sequences of images that might be considered scenes. The above mentioned look into the attic covers a couple panels. Another long scene finds McShane and his partner walking side by side in otherwise empty panels. They are shown looking in different directions and panels are interspersed with images of a neighborhood, streets and sidewalks and buildings.

The tree appears a number of times, interspersed between other images, often with a leaf or two falling from its boughs. At one point the tree is shown in the same panel as one of the interior rooms, as if it had been transplanted inside the house. It’s an incongruous image, a brief stepping out of reality that I fail to have any explanation for, yet which opens a small space of mystery. Later the tree is shown in a panel with a duck-shaped lamp drawn in front of it. This duck lamp reappears a few times at the end of book, it even appears on the back cover.

I’m tempted to attach some kind of obscure personal significance to this odd lamp. Is it a piece of furniture from a childhood room? The whole book brings to mind packing up a house for sale, moving, leaving a childhood home (where those McShane’s parents on the phone?). The walk becomes a last walk around an old neighborhood. The tree, with its falling leaves is time passing, and the lamp, a reminder, a cherished bright memory that is not bound by reality. This is what I draw from this elliptical narrative, who know what McShane’s interpretation is or what yours would be.

That duck light is extra-mysterious to my reading, because it also appears at the very end of that first minicomic I bought from McShane back in 2006. That mini, called Peck, is reprinted (with many panels per page) in James McShane: Selected Comics 2003-2008 an 8.5″ x 11″ minicomic collecting a number of McShane’s minicomics and anthology pieces. A few of these are autobio comics where McShane draws a panel for every 10 minutes of his day (there’s one of these in Kramer’s Ergot 6). Peck is similar to Archaeology in that it seems to be autobiographical, but it doesn’t seem to have a single clear narrative line. For some reason, it just mystifies me. The events shown are quite ordinary–cooking, watering plants, riding a bike, drawing, doing laundry, etc.–yet in the way they are organized and abbreviated they become almost alien. It’s an interesting effect, not found in the straightforward “10 minute” autobio comics.

The “Selected Comics” also includes a two page comic on how to make the small minicomics such as Archaeology.

[This is part 11 of a 30 part series where I am writing daily reviews for the month of December.]