After I wrote about his previous mini, Jessica, Jason Overby was kind enough to send me his most recent publication. While I was impressed by the style and disappointed by the story of Overby’s last work, the three short stories in “Solipsist’s Doodles” are more impressive as a whole.

“Michelle” finds Overby (I’m just going to assume that the “I” in all three stories is Overby talking about himself and go from there) seeing the new Charlie Kaufman film “Synecdoche, NY” with his wife and some friends. They watch the movie, they use the bathroom afterward, and they talk about the movie. It’s not much of a plot, rather, the comic traces thought, not quite stream of consciousness but definitely internally focused. Overby worries about having to talk about the movie afterwards, the performance of the discussion with friends, and intertwines his thoughts on the movie with those on his wife. The internal monologue, shown in abbreviated thought balloons, follows a number of trajectories which parallels or crosses that of the spoken dialogue. 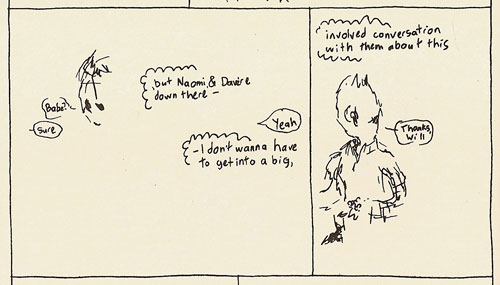 Mixing spoken word and thought. Note the abbreviated thought balloons. Like the rest of the art, the reader gets enough information to fill in what is missing.

The second story, “Bildungsroman,” find Overby going out for a jog. He prefaces this with an explanation about being fat and depressed when he got out of college and how at one point he quit smoking, started exercising, and lost weight. This is a slight story, yet in its ending Overby gives the story weight (an unfortunate pun on my part). 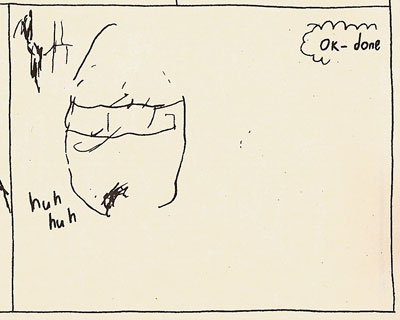 An abstracted head, breathing heavy at the end of a jog.

The last story, “Rube Goldberg vs. Occam’s Razor,” is a type of comics I’ve written about quite a bit in the past, what I call pictureless comics. The pages are divided up into panels, and the panels are empty except for text. Overby’s narration starts by talking about a “metatextual, autobiographical, superhero comic” that he has been working on. The panels in that comic are filled with a dense texture and then images are created over the texture (I think this is an example from the work in question). The title of this piece takes on an immediate resonance in comparing the density of that work to the short story here.

Overby’s work is an engaging variation on the autobiographical comic. They are much more about thought than action, and the chaotic and abbreviated artwork deflects any sense of the external world. The images are both full/busy and empty/abbreviated. In the same way that we fill in the gaps of narrative of comics panels, the reader of Overby’s work must fill in the gaps of the images. We can infer representations based on context and previous images, allowing for sense to be made of what we see, though still, at times, some images are resolutely incomprehensible to me, a puzzle to be filled in. One of the effects is to slow down my reading process. Unlike the minimal simplicity of Bushmiller’s Nancy of which it is said (by someone, if anyone knows the source leave it in the comments) it is harder to not read it than to read it, Overby’s comics require attention and translation, despite their minimal compositions. 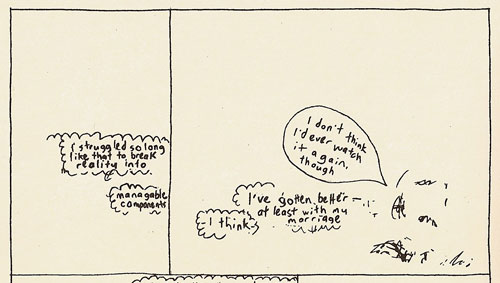 Overby’s style is analogous to the complicated world he evokes in the themes of his stories. In “Michelle,” discussing the movie they just watched, Overby notes that Kaufman seems to be treating everything as an abstraction not as it fully is and how Overby himself used to struggle with breaking the world into component parts. His style evokes the lack of easy organization of the world. Even the breakdowns themselves end up dividing thoughts into odd fragments while some panels enclose an overlap of spoken and thought word.

The more I see of Overby’s work, the more I’m impressed with it and wanting to read more. The reader must get over a certain barrier when looking at his work, as, at first glance, his pages are chaotic messes, yet with time and attention they become something more, still chaotic, yet ordered and comprehensible. 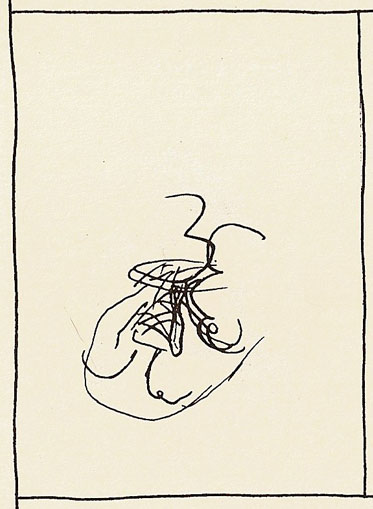 Overby unties his shoe after a jog.

I should also note that Solipsist’s Doodle, like many minicomics, is an object in itself. Mine came with a collage of images and text from magazines taped together to form a cover. Coincidentally, mine has the image of an Yves Klein painting on it–Klein being one of my favorite artists. You can order the mini from Overby’s site discretefunk.com for $2.75 ppd.