I first heard of Jason Overby through Austin English’s new 20 Questions with Cartoonists blog. Overby’s website is basically an image blog of comics pages posted on Flickr. Images like this one impressed me enough to track down a copy of his latest minicomic Jessica (his website says he’s sold out so I got mine from Poopsheet for $6).

Overby’s drawings are unlike any I’ve seen in comics before. He uses a thin and frenetic line that looks like it is vibrating at a high speed. His characters often look like they are breaking apart, about to explode into a cloud of disconnected lines at any moment. Stray lines, dots, and marks pepper the panels, often like pieces of dust on a photo negative. In Jessica, these lines are tempered by areas of black which are clearly placed with deliberation for balance across the page.

The narrative in the comic is a first person narrated (probably) autobiographical vignette. The narrator is talking to a friend and ends up reminiscing about a girl he liked named Jessica. She worked at a restaurant he frequented (I think a coffee shop, though like much in this comic it is vague), and they went out a few times. Nothing really happened. Nothing really happens. I am actually let down by the story. The art is so unusual and crazy that I expected a corresponding excitement from the story being told, yet all those great images essentially tell another boring autobiographical story. 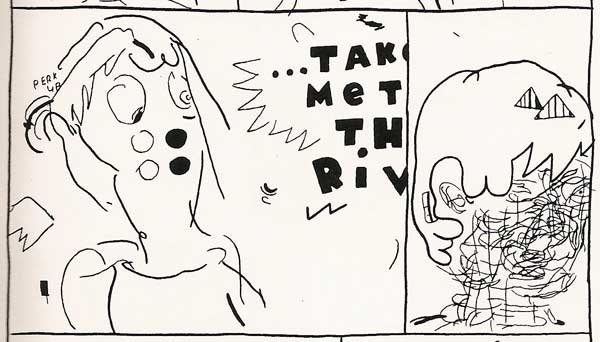 Overby works in a lot of interiority to the narration. Thought balloons, the narration itself, and visual cues in the art. For instance, in the panels above, the narrator has taken off his headphones and hears the music playing in the cafe. We later learn that it is the Talking Heads and that the cafe has been playing it “all the time.” The second panel shown gives an indication of emotional state based on the even more chaotic than usual face. The panels below show the chaotic mixing of thought and speech which works really well with Overby’s style. 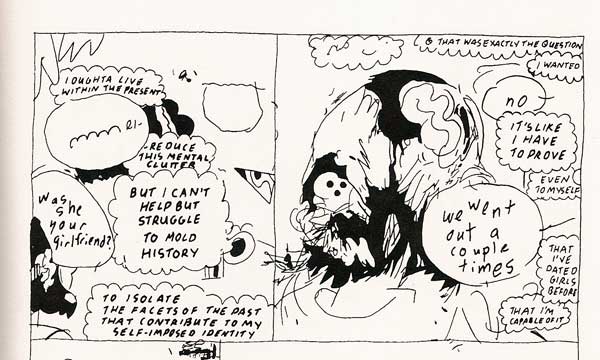 One of the odder aspects of the book is the way Overby often shows the narrator as a floating circular shape with four circles inside it, almost like an alien skull. Word balloons narrating the story point to this shape, but I can’t figure out why the narrator is represented that way, what it symbolizes (if anything). It’s odd and fascinating.

At the end of the story, the narrator tells how he sits drawing in the cafe, where often a lot of girls would be, “waiting for some fuzzy potentiality to unravel itself.” Fuzzy potentiality unravelling might be a great way to describe this book. The imagery has a fuzzy quality to it, and Overby is certainly filled with potential, but what unravels here is like a date that goes nowhere.

I’ve been following Overby’s blog, marveling at the pages he posts, and I look forward to reading whatever he publishes next.