If I summarized the plot of Dash Shaw’s brick of a comic, Bottomless Belly Button (henceforth, BBB), it wouldn’t sound like much. Three grown-up children return to their family home for a week to learn that their aged parents are getting divorced, psychology ensues, then they all leave. As a basic plot, it’s not anything you haven’t read before. When I wrote about Adrian Tomine’s Shortcomings a few weeks ago I criticized his psychological realist work for its lack of invention or daring. Shaw, on the other hand, seems to be as much interested in the form of his story as the content, and he does not disappoint here in taking a rather conventional story and creating an inventive, entertaining, and layered work that demands rereading due to an often unconventional and exploratory use of the form.

The book is forcefully marked as other by its sheer size and weight. At 720 pages this is a massive comic, dwarfed on my shelf only by the 2000 page Comix 2000 anthology (even Blankets is smaller), reminding me of Spiegelman’s talk of a “comic book that needed a bookmark” (Instructions on the volume suggest reading the three parts with breaks in between). This is not a book you enter lightly, yet it is not an overly dense read. Unlike a prose novel where pages, generally, each contain an equal amount of text and a 700 page book would be considered a long term commitment, comics can often be light and airy despite the number of pages. Shaw most frequently uses a 6 panel grid, but he frequently varies the pacing of the narrative by increasing or decreasing the number of panels from 12 down to single page panels. This causes some sequences to run quickly across a large number of pages, while others slow down the reader’s page turning. The varied use of panel size in combination with the number of panels per page is also used to alter pacing.

In a sequence of pages at the end of part two, Dennis, the eldest son of the family, follows his father onto the beach one night. The whole sequence is laid-out with a single panel centered on each page. As it progresses, with the father collapsing on the beach and Dennis carrying him back to the house, the panels increase in size. Starting with panels 1/9th the size of the page and ending with full page images, the panels not only increase the tension in the story, but the rapid flipping through of pages by the reader also adds to the sense of urgency felt by Dennis. Shaw clearly pays much attention to these formal elements and considers how they can add to the reading experience to better evoke the emotion of the characters.

The emotions are also amplified in the way Shaw often ends a gridded page in the middle. A page gridded out for six panels ends after three panels, one set for nine panels ends on panel five. These two cases are punctuated by the words spoken in the last panel of each page: in the first Jill, the daughter of the sister, speaks to Dennis, “You’re never going to see her again,” while in the second the father says to the family, “We’re just not in love anymore.” These statements gain gravity by the blank half-page that follows them.

In a sequence that ends part one of the book, Peter, the youngest son, takes a walk on the beach at night, runs into a girl he saw earlier, and goes swimming in the ocean with her. Each page holds only two square panels separated from each other by a wide gutter and from the page edge by wide margins. These isolated slightly cramped panels echo both the alienation Peter feels in general and the distance between these characters at this stage in the story. Later, their interactions are shown are much denser pages as they become intimate (or at least closer).

At times Shaw pulls the reader back from conventional, externally focalized panels (we are seeing the characters from outside), and shifts to an internally focalized page. In one scene, Dennis, investigating any possible reasons for his parents’ divorce (beyond the simple one they give), pages through a photo album. Shaw draws Dennis’s thumbs at life-size coming onto the page from the far left and right margins of the book with the contents of the album in between as if the book BBB were the photo album itself. This is an effective way for the reader to see the contents of the photo album first hand, but I don’t think it is as effective in providing any identification with Dennis (who, in general, acts so erratically that it is hard to get too close to him). 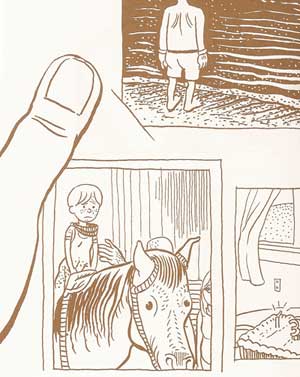 In this sequence Dennis finds a key taped into the album which leads him to a secret passage in the house. Secret passages, rooms, keys, and codes are all part of the story. Interestingly, the secret and hidden when discovered do little to explain anything at all in the book. All Dennis’s investigation do not offer him any real clues to his parents’ divorce. Shaw incorporates a code for the reader to decrypt in some of the letters between the parents which Dennis discovers, but even these messages do not provide any real revelation beyond an explanation for the title of the book. In a way, these non-revelatory secrets only underscore the simple reasons given in the book for the divorce, as if Shaw were undermining any attempts at hidden explication in his own work.

This general lack of explanatory depth is also found in a few decidedly fantastical occurrences in the story. Claire, the sister, and Aki, Dennis’s wife, spend a night out at a club. During the evening, Claire loses one of her long gloves, and Aki gets bruised in an altercation with a man. The next morning Claire’s glove is in her dresser drawer, and Aki’s leg is unmarred. These events are briefly marked as a mystery by the characters but end up being unquestioned and unexplained.

I haven’t spent time summarizing the events of the story, but I will talk about the structure of the story. The primary focus of the narrative are the three children of the Loony family (that name is one example (of a few) where Shaw’s symbols are rather too blatant) as they deal with (or not) the news of their parents decision to divorce–with subplots for Dennis’s wife and Claire’s daughter. For the most part we don’t see the whole family together except at the beginning and end of the story, where they gather around the dinner table. They live their separate life’s with only occasional intersections. This is stressed in one two-page spread where Shaw gives each sibling a single tier of panels that crosses both pages. The three siblings actions are visually and metaphorically parallel.

Dennis, as I mentioned, tries desperately to find some reason, while Claire seems more accepting, looking back more anxiously to her own divorce. Peter is almost completely disconnected from the rest of the events. His story, a romance with the young woman he meets, almost exists as its own story. This semi-separate story echoes Peter’s alienation within the family and the world. Shaw draws him as a kind of frog-man, evoking the way he sees himself (at one brief panel we see him as he is seen by the woman he meets, and he does bear resemblance to the rest of the family). The separations and reunions of the family create a classically symmetrical structure to the work.

The children’s three paths through the story are hinted at on the verso of the title page where two brief sequences of panels show first three types of mark making (stippling, hatching, cross-hatching) then three images labeled one, two, and three point perspective. Contrary to the normal examples of these perspectives where a single vanishing point causes lines to converge at the horizon, Shaw draws separate vanishing points on the horizon. 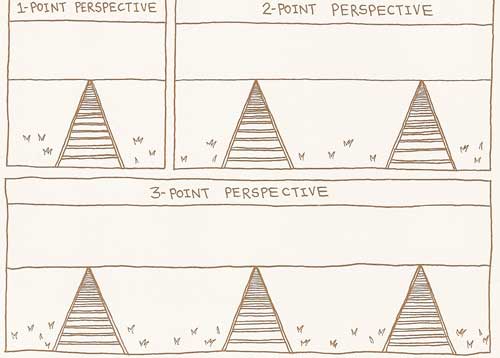 These types of metaphors and symbols are laced throughout the book. The first pages go through an illustrated series of types of sand, while a later sequence does the same for types of water. Both speak to the ever-changing, grouped yet separate nature of the family (not unlike the panels of a comic, a la Groensteen’s iconic solidarity/solidarité iconique). The sand sequence that starts the book is followed by a similar sequence on the “types of the Loony family” which makes the connection explicit (perhaps too blatantly). These sections stand outside the rest of the narrative as they are narrated by an external narrator, while the majority of the book is without narrative text. Within the text, water is a prominent symbol. There are a handful of sequences where each primary character takes a shower, in a very different way than say, a shower scene in a shonen manga. While Shaw uses a few sex scenes for Peter’s storyline, they are decidedly anti-erotic, focusing on Peter’s own anxiety and inexperience, which combines aptly with Shaw’s drawing style.

Shaw’s style is neither slick nor refined. It has a looseness to it that occasionally makes represented objects look distorted or too abstracted, yet once you’ve acclimated yourself to this style, it is effective in communicating the story. Shaw makes use of a wide variety of comics tropes and shorthands as well as a variety of mark making techniques to clarify where the simplified representations might be insufficient. In some cases he creates his own shorthands for things like an arm “falling asleep.”

He occasionally veers into less representational abstraction to great effect. At one point Dennis has a hallucinatory vision on the beach, where Shaw pulls out a cubistic style. 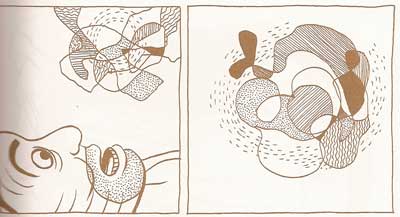 I’ve written about it before, but he also makes frequent use of text in his images in a way that is more description or label than the conventional use of text in comics (sound). Examples of this are numerous and varied, as I read I found myself marking a dozen or so examples. Sometimes the text is clarifying an action, sometimes an object, sometimes it seems to be expressing either a character’s or the narrator/artist’s subjective thoughts/opinions. The panel below shows two examples of this from the same page, one expressing subjection another clarifying a movement. 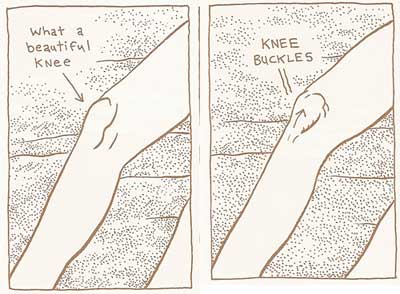 Even the use of text for sound avoids the usual onomatopoetic sound effect (Bif Bam Pow) for a descriptive label like “Ocean Sounds” or “Loud Music.”

Pardon the crappy scan, the text says Loud Music, not the abstract backgrounds that add to the sense of overpowering sound.

This use of text in BBB fascinates me. It, along with Shaw’s use of layouts for pacing and rhythm are the two areas where his work is most formally interesting in this book. 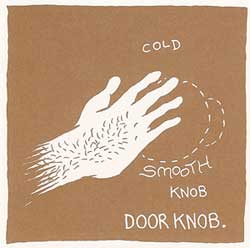 Dennis feels around in the dark

BBB is an ambitious work. I could go on about different micro and macro level aspects of its structure, pacing, and imagery. With each new work, Shaw seems to be making new strides in his work and new discoveries in the form. I’d highly recommend all his works: Goddess Head, Mother’s Mouth, the Cold Heat Special with Frank Santoro, his webcomic BodyWorld (starts here), and his short stories in current issues of Mome. Shaw is young and ambitious with the abilities to carry out those ambitions. Here’s hoping he keeps up his current level of productivity and artistic progression.

Added praise for Jacob Covey’s design work on the book. It’s an interesting, clear design with covers that feel nice in the hand (important for such a big, heavy book).