Adrian Tomine is a bit of an anomaly in comics. Shortcomings, his latest book, is a work of psychological realism that I cannot avoid referring to as “literary fiction” with a bit of a negative subtext. Pulling apart my feelings about this book is difficult and rife with certain stereotypes and hard to define term (like “literary fiction”). Shortcomings is set in the contemporary United States, focusing on character psychology, shorn of any conventional genre trappings, and topped off with a bit of morality. Comparisons have been made to authors like Raymond Carver, though I’ll admit my reading of Carver is limited to a story or two.

Tomine got a lot of praise for this book, it appeared on numerous “best of” lists for 2007 (it is second on Dick Hyacinth’s best of meta list), though I haven’t found any really good explanations of why it is so lauded. (Anyone have a good review or two of it to recommend?) What Tomine does would be conventional contemporary literary fiction if it weren’t comics, but in comics it is almost unique and thus, I think, gets a lot more credit than it might otherwise deserve.

Shortcomings is, basically, a characters study of Ben Tanaka, whom it would be quite hard to call a sympathetic character. He is bitter and angry and change resistant. The story is externally focalized on Ben, showing only scenes that he is privy to but allowing no thought balloons or interior monologues. All we know is what we gather from character’s actions and what they say to other characters, which makes this a talky comic with lots of scenes of two characters in dialogue. The ending is ambiguous: perhaps there is some small sliver of understanding born in Ben or perhaps he is unchanged and even more alone than before (I guess those are the optimistic or pessimistic readings).

I can’t but see this comic as a film. Surely someone in Hollywood is already at work on it. It would be an indie darling, and Tomine’s comic is so cinematic in form that it would require little script work. Perhaps this cinematic style is how I best express my boredom with the book: it’s lack of adventure, not in the sense of action but artistically.

Craig Fischer introduced me to the concept of invisible style, and I think it aptly describes Tomine’s comics. He does not draw attention to the art in any way. The style falls more on the realistic side for a comic (not photorealist, but definitely using the proportions of external reality) with clear linework, spot blacks, and occasional hatching. As for the compositions, layouts, breakdowns, or narrative structure, none of it is daring, inventive, or particularly interesting. Everything works to tell the story as clearly as possible, even the subtler parts of the narrative (an omitted scene at the airport, a realization by Ben while looking at a photo) are clearly marked by the extremely rare use of repetition. In fact, Tomine seems unable to otherwise use repetition as a formal device. All the numerous dialogues fall prey to a need for endless variation of panel composition that serve no purpose other than to not repeat a single view of the character(s) (see the page below). This is a pet peeve of mine with comics (one you see in film too, where a director seems unable to just let a camera stay in one place), the need to vary for the sake of variety, and it is even more frustrating because one thing that Tomine is skilled at is realistic facial expression and body language. He could get away with a less busy and more expressive compositional structure because of this quality. 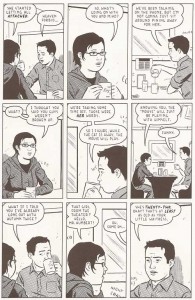 This invisible style and the psychological realism of Tomine’s work is where he seems out of place with most comics. Who else compares? Kevin Huizenga’s work has a certain realism and contemporaneity to it, but he uses fantasy frequently and is unafraid to be daring with his visuals. Jaime Hernandez might be a close call in both style and content, but he also makes use of fantasy and there is something completely unique about the seemingly neverending epic of his primary characters–not to mention the heights to which he has taken a similar style, one to which he adds a greater sense of verve and cartoony expression. Manu Larcenet’s Ordinary Victories is similarly focused as a character study (thought admittedly one that is not so isolated and solipsistic), yet he manages to use his more traditionally caricatural style to greater expressive effect.

The one comic artist I think of is Daniel Clowes, particularly Ghost World. I haven’t read it in a long time, but as I recall, it has that same character study, realist quality. Yet, even that which is one of Clowes least surreal works, holds in my mind a greater sense of mystery and mastery.

Tomine’s work started in autobiography and I wonder how much the small scale psychological realism of this fictional work is an off-shoot of the autobiographical impulse and the “write what you know” cliche. Do we see similar non-fiction to fiction transitions in other autobiographical comic artists? Chester Brown successfully moved away from the genre with Underwater and Louis Riel, two works that are quite different from autobiography. Jeffrey Brown’s non-autobiographical work has all been, as far as I’ve seen, parody/pastiche (Changebots, Big Head). Many others just stick with autobiography. Kolchalka does a variety of work, but his diary comics, while they have become a major part of his oeuvre, were not originally his primary works (that I’m aware of).

None of this is to say that Tomine’s work is not decent comics. Rather, I find it is not to my taste, and I wanted to consider why that is, particularly as someone who has been reading such so-called independent comics for a long time and as someone who used to read Optic Nerve (where this story was serialized after I stopped reading the pamphlets). I think that when I read Optic Nerve, it was a very different type of work than other pamphlets at the comic store and, by that account, was one of the limited options available for someone looking outside superheroes/fantasy/sci-fi. Now, my tastes have more room to roam in the form. Tomine’s work could be considered part of a new kind of comics mainstream, one more in line with the mainstream in literature and other arts. Works such as Shortcomings, Fun Home, Persepolis, Blue Pills, and others (interesting how off the top of my head all the other works I named are autobiography) feature stories that tend toward the kind of work that I see as prominent in mainstream literary fiction and the indie darlings of film.

I’d love to hear my readers comments on any of this, as it all feels a bit scattered and ill organized.