Over at his blog, Ben Towle, in discussing layouts and finishes asks of a particular panel:

Now, why can’t I just write “breathtaking view” and be done with it instead of having to draw hundreds of buildings!?

I’d hazard that he could. I’ve posted a few times about comic artists using words as a descriptive part of an image, for instance in my ComixTalk column about text in comics. This type of thing might be considered “cheating” but on the other hand as a writer “cheating” if he describes something? It’s just another level of word-image interaction for comics to explore.

In comics we tend to weight our use of text to sound and narration, but text can be used for visual and descriptive purposes in place of, as part of, or as supplements to images. Towle lamented not being able to leave “breathtaking view” as it appeared in his thumbnails and instead having to actually draw a cityscape from an aerial viewpoint.

While not a perfect example, I think it can be a useful one. If the “breathtaking view” is important information to convey, does the drawing do it justice? I would say, that while the “view” is conveyed, it does not convey a real sense of awesomeness that I would associate with “breathtaking.” This is not to criticize Towle’s drawing specifically. I think there are very few comic artists that could convey such a sense in a single image (this is something more easily conveyed in a photograph or a painting). Some might be able to convey “breathtaking” through the style of the image itself rather than the represented scene (that is, the reader sees a breathtaking drawing of some kind of view). The idea is as much about reaction and subjectivity as the image itself. Most would have to take a few panels to express the “view” and the response from some subject/character to clue the reader into the impressiveness of the scene. It would be a kind proxy sense of awe through a character. Porcellino does this quite frequently in his work, using his extremely minimalist rendering of nature. He makes us feel the awe through a combination of multiple images, subjective response, and words. Similarly, think of the ways Huizenga deals with such scenes in Or Else #2 (both the scene in the library and the later scene with his neighbors looking at the moon). 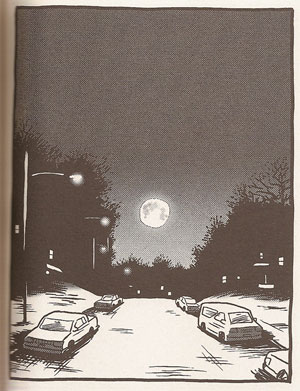 Moon from Or Else 2 by Kevin Huizenga

By itself this image of the moon (from Or Else #2) is not extraordinarily impressive, but in the story itself the moon is a focus of much attention. The reader ends up “seeing” the impressiveness of the moon through the characters’ reactions and the associated images and panels.

In Porcellino’s case this response to nature or natural events is often the main focus of his comics. He can spend a number of panels building the scene/reaction because that is the comic. For something like Towle’s case, I think that view is just a single panel, part of a larger story (about Amelia Earhart). By using text one can quickly convey the information without using numerous panels, similar to the way a lot of narrative captions in comics are used, particularly the old classics like “later that day”, “back at the hideout”, etc. Admittedly, “breathtaking view” may be a clichéd phrase to use, but that does not negate the potential for a more effective phrase to serve as a substitute. 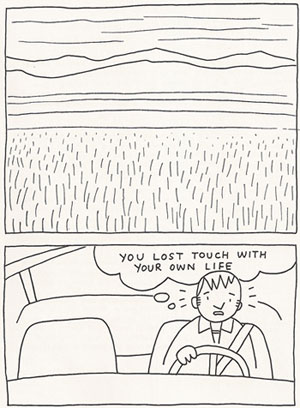 In these panels from King Cat #68, the landscape is an impetus for a bit of personal revelation for Porcellino (second panel). By itself that panel would not be particularly impressive (well, I love it’s minimalist concision, but it is not an awe inspiring landscape).

I’ve been rereading Dash Shaw’s Bottomless Belly Button this week, and it offers numerous examples of this sort of descriptive text embedded into the images. He often uses text to describe an otherwise too abstract image or as a shorthand for some kind of action. Often he seems to be using it to make up for a lack of image clarity or for limitations of his media and style (simple lines, single color, high contrast). 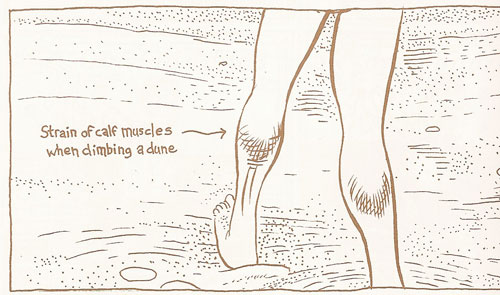 In this panel, the text supplements the image in a way that I think is effective. It’s shorthand, like much in comics, which adds information to the image we would not otherwise easily receive. I associate this, in a way, to the use of text for sound effects. The text provides information that could not or could not easily be conveyed in the image. 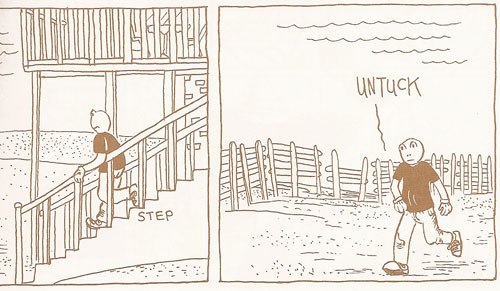 These two panels are less successful uses of supplemental text. The text “step” is rather redundant as a label for the stairs or for the character’s actions. The “untuck” text works to compress an action into a single panel that might otherwise take two (or more), but in the context, it is unnecessary, and it doesn’t add anything to the image. In the previous page the character is made fun of for having tucked in his t-shirt and in the subsequent panels we see it is untucked, allowing us to easily infer the action of this panel (if we couldn’t from the panel itself).

I don’t see this as “cheating” any more than using a caption to set a timeframe for a story (“Summer 1937”). In both cases, those elements could be conveyed through images/panels, though in a generally less compact way or in a way that will seem just as “artificial” (like the old trick of having a protagonist fill in the reader with some extra dialogue to an ignorant side character). All options have their place, their uses, depending on where the creator wants the focus to lie.

In the comments, Andrei compared this to the old saw of “show don’t tell” that is so often passed out to writing students (and comics students?). In writing I most often hear it in relation to characters. “Show us the characters acting out their traits. Don’t just tell us about them.” In one sense this is all a matter of summarizing information and how much a reader needs to work to get information. You can say, “John was a decent and honest man.” Or you could have scenes of John acting decent and honest and let the reader infer his decency and honesty. If the story is about John and his decency or honesty, then the latter, showing, would probably be the way to go. But, if the story is about Sarah, John’s cousin, and he is just an incidental character, then sure, just tell us about him. That’s a very basic and conventional example, but, in conventional psychological realist fiction, that is one of the best (and most used) examples.

In a different sense, you could write: “John stopped for groceries on the way home and cooked himself a nice meal.” Basically, telling. Or you could write a long scene showing John at the grocery store getting his food and then at home cooking. This is all about compression and narrative focus. Where should the narrative be focusing its finer attention and where should the narrative summarize. In either case, one must assess on a case-by-case basis.

The words “show” and “tell” are poorly chosen for writing. In some sense all writing is “telling” (varying sorts of narrators and authors telling the story (see Booth’s Rhetoric of Fiction)), while all that is being “shown” are words. But how does this change in comics where showing is, ostensibly, the primary means of narrative. Must we automatically equate “telling” with the words and “showing” with the images? I don’t think it’s a division we can make, given the flawed nature of the starting terminology. We might look at the contrasts of summary type panels to sequences of panels that show events at a more detailed level, akin to the old compressed/decompressed contrast, but with a more careful eye to the lack of any original narrative time which one “compresses” or “decompresses.” (Genette’s work in Narrative Discourse might be place to start on such a project.)

That is something to consider for another time.