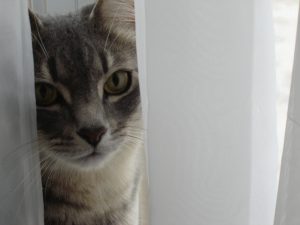 Last week we put our cat Zoe to sleep, which makes it sound like she went to bed. We decided to have the vet euthanize her. A few weeks ago we discovered she had a tumor in her bladder, it grew pretty fast, and options for treatment were limited, probably expensive, and probably not going to be effective anyway. Watching her struggling in the litterbox for what I clocked at 3 plus minutes one day really drove home how bad the situation was. We knew it was coming, so I feel like I had time to process it all, make sure she got a lot of attention, and that I didn’t spend a lot of time being annoyed with her. Zoe was a sweet cat, but oh could she be annoying.

We adopted her and our other cat about 10 years ago now from the son of a former colleague of mine. He was moving out of country for a job, so he needed a home for his two adult cats (young but adult, I’m actually not totally sure how old they were). He and the cats lived in Baltimore, so one summer day he drove them up. They had been given some kind of sedative for the car drive, so they were a little wobbly when they first emerged from their carriers into our house.

Zoe promptly hid under our sofa. She didn’t emerge for days. It was poor timing in that I had to go off to a conference for work, so my wife was left along with two new cats, one of whom didn’t want to leave the confines of the rather low under-sofa area. In hindsight, it was uncharacteristic of Zoe to be that scared: she was always the first to rush to the door when someone arrived or to run to investigate unusual sounds, and when we moved house she was the first to want to explore her new home.

Once she acclimated, Zoe was always around. She loved watching us doing stuff, and she loved intervening, which occasioned many a yelling at. This was particularly an issue with anything that looked like a string or ribbon. She went wild for it. One time we had, for some reason I don’t remember, a helium balloon or two in the house with those long plasticy corrugated strings running off them. Zoe managed to grab one of the strings in her teeth and promptly headed down our hall, balloon trailing behind (and above) her.

She also became obsessed with a piece of brown ribbon from somewhere, maybe it was related to a wedding invitation (I’m not sure anymore). She grabbed it from somewhere and then would drag it around in her mouth and want to play with it. Concerned about her eating it, we started hiding it from her when we weren’t around. My wife hid it in a little drawer on her computer desk. It was low to ground with just a normal u-shaped handle. One day I turned the corner and there was Zoe, paws up on the drawer handle. She knew the ribbon was in that drawer and was determined. I stood and watched as she managed to get her paws onto the drawer handle and then pull open the drawer so she could grab the ribbon with her teeth. I was very impressed (I still am).

Another day, Zoe was looking up at me from the floor and her right top lip was raised up a bit in what I later called her Billy Idol sneer. I’d never seen her do that and it seemed odd. Upon closer investigation of her mouth, we realized her large top right fang was gone. No clear wound or blood, just… no fang anymore. We never did find that fang or have any idea how it was lost, but ever after she would occasionally look at you with her Billy Idol sneer.

After that she’d also do this weird thing, where if you were petting the side of her face (which she loved), she would sometimes like… chew… we called if “chomping”. It was like she was chewing on nothing, moving her jaw, and pressing the side of her mouth (always the side with the missing fang) up against your hand. It made a funny little chewing sound, but she would never be actually biting.

Zoe was never the best at getting pets. She’d always want attention but wasn’t good at staying in place for it. You’d pet her and she’d walk out of range, then circle back around for more pets. And when she really wanted attention and you ignored her, she’d use the “paw of attention.” I’d be sitting at my desk working and then I’d feel her paw against my leg, sometimes with claws when I neglected to keep hers trimmed (much of the time). This was annoying in itself but could also be accompanied by a loud howl. This is also how she’d let me know she wanted food or a drink from the bathtub. She only really liked drinking from the slowly trickling faucet in the bathtub. Pretty much every morning before I could take my shower I had to wait while she had her bathtub drink. Then later in the day she’d get my attention and run in there and jump on the tub edge and wait for me to turn the water on. 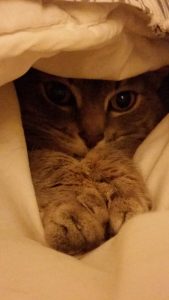 Later in life she started eating butter, but she wouldn’t just eat it any old way. One morning after making some eggs and toast and I put a knife into the utensil holder at the front of the dishwasher. It still had some butter on it, and somehow Zoe noticed it, put her two front paws up on the open dishwasher door, and licked the butter off the knife. The next morning there she was two paws up on the door looking at me. From then on, butter on a butter knife in the dishwasher was her favorite treat.

I worked at home for almost the whole time we had Zoe, so her desire for attention often got her on my bad side. The more stressed I was from work, the worse a sudden claw to the leg made me feel and I’d yell at her. That never really kept her away for more than a few seconds. She was very persistent.

She was also persistent about my office chair. She slept there a lot at night (and I’d often find bits of litter from her toes on my chair in the morning), but during the day, especially on colder days, she’d manage to lay herself down behind me on my chair. I’d be perched forward and she’d be stretch out as my little furry lumbar support. I’m sure that didn’t help my posture but it was nice. If I got up while she was there, she’d immediately stretch out. Sitting back down later was always a little tricky as I slide back into the chair.

She had surgery once, early on, for some kind of blockage in her intestines. We had to leave her at the vet for a few days. We’d go to visit her every evening, the vet would let us sit in one of the exam rooms and we’d talk to Zoe and pet her and make sure she knew we hadn’t abandoned her. 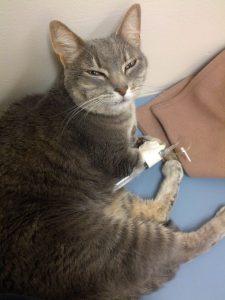 For a very long time she was taking medicine for intestinal issues. She threw up a lot, which is certainly one thing I don’t miss. Every night we’d have to give her different liquid medicines. So often she seemed to know when it was about to happen, even without us moving near the medicine, she’d suddenly get up and run off. I’d often chase after her, dragging her out of her various hiding spots (behind the guest bed was a particular favorite), or else just wait her out until she got tired of hiding and came back.

I never played with her enough, but she did love chasing after various toys at different times in her life. She often took playtime a little too seriously, spending too long crouching and hiding and waiting to sneak up on the inanimate objects. She would’ve been a good hunter if given the chance. One morning she did manage to catch a mouse in our house. I walked into our living room and there she was standing over the body. She looked very proud.

When the weather was cold she loved sitting on my lap in bed while I read before going to sleep. She’d just curl up and I could rest my book on her. What she hated was “bedtime” when she had to get out of bed and leave the room. Right at the beginning we toyed with letting the cats stick around while we slept, but Zoe woke me up in the middle of the night for attention and thus bedtime was initiated. At our old house which had carpet, she’d lay outside our bedroom door and claw away at the carpet until there was barely anything left. 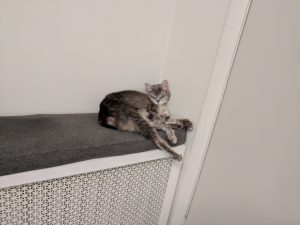 Zoe and her housemate Buddy (the cat) did not really get along. They were not siblings but had spent pretty much their whole lives together, yet somehow they mostly just ignored each other. No playing, no cute cat cuddling, barely even acknowledging each other’s presence unless forced to. Buddy did occasionally attempt playing, maybe… or maybe he was just being ornery and Zoe would get mad and run away. Then other times she would just whack him in the head to warn him off if he got too close. He’d always look surprised and hurt as if he wasn’t the one who would always instigate trouble. At bed time, as my wife or I were reading, they could manage to both lay on the bed at the same time, sometimes without one scaring off the other, but never very close and never for very long.

I’m not sure Buddy has really noticed or cared that she’s gone (he certainly seems to be taking advantage of the extra attention he can get), but I notice. I think I see her out of the corner of my eye, or I find myself doing something that only made sense in the context of her presence. The other day we got home from some errand and I went around to our back porch to fill up the bird feeder. Zoe would often be asleep on the couch with a view out of the door to the porch, so when I did something like that I’d often spy in to see her curled up. For a second the other day, I thought she’d be in there, and then I remembered she wasn’t. I guess it will be like that for awhile. 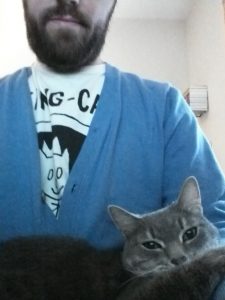 (All photos by me, except that first one which is by Ian White Williams. He always sent the cutest pictures of Zoe while we were away on vacation.)