Back in September I reviewed a minicomic and a webcomic by Aidan Koch. I emailed her after that and got a few more recent minicomics. One is called “Hypnotizing” you can read it at Flickr, starting with page one (though note the pages are out of order). The other is called “Yes” you can see the comic and a spread from it at Flickr.

“Hypnotizing” is the more visually abstract of the two. Two characters (male and female) interact and the male seems to hypnotize the female with the female seemingly losing herself. Both are rendered with varying levels of detail and realism. The male face is always almost completely blank but for a dark triangular shape. The only real time his face is prominent is on the last page, where it looks like a skull with dark areas where the eyes and nose should be (near the text “You exist here now, in the dark”). The female is given more of a face, and because of such she is easier to read emotionally. She is closer, while the male is more distance, unknown. In one particular page (5), a three panel sequence closes in on her face as abstracts marks (seemingly representing the male’s hypnosis) cover her forehead. Her eye is prominent, shown bigger in each panel, expressing a powerful sadness and a distant gaze. The three other panels on the page, parse out the text “I” – “Can’t” – “Feel Anymore” with anymore dispersing into dashed lines.

I can’t even begin to make words to really describe or interpret the comic. I don’t really want to. The combination of the words and the drawings go beyond any clear literal meaning.

“Yes” is less visually abstract than “Hypnotizing” and also less narratively scenic. There is nothing that I would consider a conventional scene. Rather the comic shows us two different characters and objects/symbols (houses, flora) that are made to be associated with those characters. The numbers “1” and “2” appear throughout (which you can see in the image linked to above), linking a dark-haired boy to “1” and a light-haired girl to “2”. Two panel pages, explicitly add them together with a “+”. 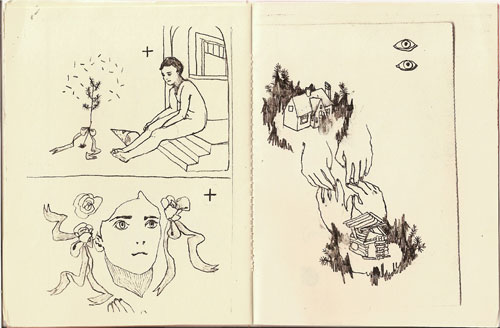 A spread from Yes.

The comic requires rereading, paging back and forth, as you try to connect images. It feels very personal, yet it conveys a relationship between these characters, a hinting at something. I read it as a love poem. It starts with a “0” and a “-” yet moves to positive numbers and “+” and, in the title, which only appears on the back cover, “Yes.”

Both comics are drawn in pencil, providing a nice soft tonal variation. The pages are sparse and airy, with rare exceptions (the last page of “Hypnotizing” for instance) where the density of the drawing is thematically relevant. “Yes” appears to have been photocopied right out of a sketchbook and you can just see hints of erased text in a few pages (otherwise, the comic is wordless with the exception of a single “sigh”).

If we can say that there exists such a thing as “comics poetry” (and I believe we can), these comics are fine examples, deserving of further exploration.

[This is part 12 of a 30 part series where I am writing daily reviews for the month of December.]