Sometimes I read a comic and it reminds me that comics can be narrative without being clear, character driven, or plot-based. Comics narratives can be abstract, allusive, elusive, elliptical, yet still visual rich and… poetic. Warren Craghead’s work always brings this to mind, though I’ve yet to manage a post on his How To Be Everywhere which will do justice to the book. On some recommendation–or perhaps I was just ordering some other minicomics and wanted to make the postage worthwhile–I bought a copy of Aidan Koch’s Warmer a few months back. It got lost in the piles and shelves of my office until her name showed up again online, first at Arthur Magazine (where Jason Leivian of Floating World Comics in Portland does some comic editing) and then at TopShelf 2.0 (both actually showing the same short comic). So I reread and reread.

The first panel in Warmer shows a mug, envelopes, and the corner of a journal or letter (something that has writing on it). The comics’ through-line is a textual narration that reads like a letter, like someone addressing a letter to a close friend: thoughts and feeling with a “you” addressed at a few points. A female figure, I assume this is the narrator, is a consistent visual. Other elements appear here and there, an envelope makes a reappearance in the second to last page, held in the hands of the woman, further support for my reading of the text as a letter.

The narrative has some almost conventional, though rather sketchily fleshed out, scenes as well as more symbolic or thematic sequences. One page holds two panels of narration “So now I’m here. I shouldn’t be.” and “I should go out” accompanied by a block of small panels. I’ve reproduced it here: 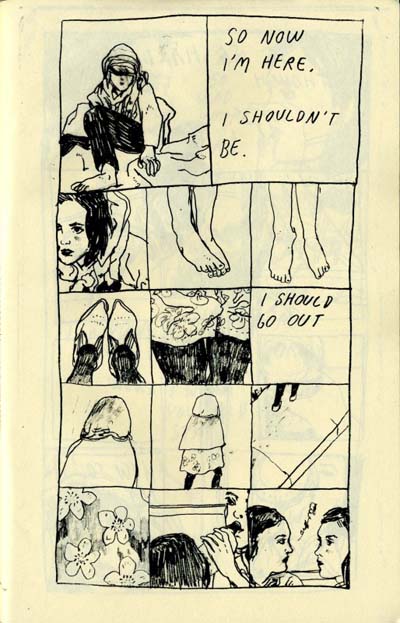 Note the transition from the full figured sitting female at the top to the seventh panel showing the hem of a skirt and stockinged legs now more clearly in a standing position, then the repetition of the hem and stockings in the panel directly beneath it, this time part of a three panel sequence of the women walking. The last strip of panels places her somewhere with other people and bottles (this continues onto the next page). I love the way this sequence is shown, drawn out with close-ups, repetition, and transitions that aren’t too explicit. We see her bare feet moving slightly, then the shoed feet ocularized through the character. The close-up compositions in many of the panels create a sense of private space, of intimacy.

The comic begins with cold and ends with warm, which makes for a transformation that works well outside of any plot-based movement. The cold/warm theme is also evoked by a covered/exposed theme that is primarily seem through the clothes of the protagonist. She is often shown wearing some kind of hooded cape-like article that I’m hard-pressed not to relate to representations of little red riding hood. We also see her in a bathing suit. The two outfits clearly associated with cold and warm. The movement between both is most clearly seen in two brief sequences. In one three panel sequence, two almost identical panels of her torso (head mostly cropped off) in a long sleeve shirt flank a panel showing her in the process of removing her shirt, arms raised, shirt mostly covering her face. The sequence is like a hesitation, a movement and then an undoing. Another sequence shows her sitting in the same position in two adjacent panels, in one she is wearing a shirt, in the the other her bathing suit. Both of these paired concepts, cold/warm covered/exposed, could also be read metaphorically into the implied communication/letter aspect of the narration and the mostly obscured relationship between narrator and narratee.

Warmer is a strong comic by a young creator, and her growth is visible in the more recent “Little Flashes.” This time Koch is working in color with colored pencils and gauche (I think). The four page comic forms a very brief narrative with a minimal amount of text and a real emphasize on color and expressive abstraction. These four pages are some of the most beautiful comic pages I’ve seen all year. Seriously, go read them.

Like in Warmer, the beginning and ending are strongly punctuated. “Little Flashes,” aptly enough, begins with abstract fields of asterisks and lines and dots that seem to burst with color on the page. Mark making is prominent here, almost overtaking the more conventional line/outline drawing in Warmer. Panel five on the page (or rather panels 5-8 existing where panel five would be on the otherwise standard six panel grid) is subdivided into four squares, two with words, two with image, that gives the rest of the page a narrative movement that might otherwise be hard to detect. “Existing” followed by imagery similar to the previous panels, and “then gone” preceded/paired with a panel of black (though a very textured black) brings time into the page. Also noteworthy is the balance of colors on the page, the way the midnight blue makes scattered appearances in the first panel and then comes in much fuller in the flowery starburst of the last panel. 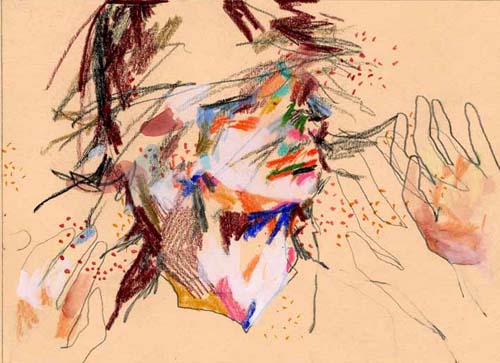 Page two brings in a woman who is abstracted, cropped, mostly deleted, just face, hands, a neck. You don’t need more than that: the wonder in the eyes, the surprise, the awe in the mouth, the hands reaching out to touch something ethereal. And then a panel of movement (see above), an overlapping repeating delineation of hands, almost scribbled movement lines across an obscured face. Contrast this airiness with the text: “touching reality.” And the colors, again, are amazing, eschewing realism (but for the pink flesh color in the second panel) for bolder more expressive colors. The comic then moves into landscapes and places the woman in that landscape before an ending where the flashes, the landscape, and the woman are all brought together into an abstracted yet identifiable swirl of color.

Koch’s comics are compressed and visually rich, they repay rereading and they demand attention, not just to words and a quick communicative, iconic image before moving on to the next panel, but to line and color and texture and to the connections between panels both near and far.

You can check out some of her other comics work at: her website and her Flickr “comics” set.