This post originally appeared at The Panelists on September 6, 2011.

Canadian comics is all Drawn & Quarterly and Dave Sim, right? English language Canadian comics get the attention from the English reading blogosphere, but there’s a whole world of French language comics from Quebec. Thanks to the webcomics at Grandpapier (a few of which I’ve written about before: here, here, here, and briefly here) I discovered the work of the group of Quebecois comic artists around the small publisher Colosse, which publishes small print runs of books by a fairly consistent group of artists. I’ve read and reread a few of these in the past weeks, and I thought I’d share some thoughts on works by three of the artists. 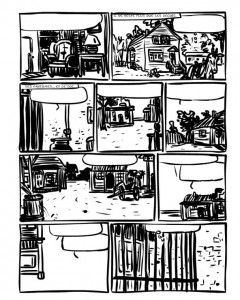 Cinéma by Sébastien Trahan (Colosse, 2010) – I was first tipped off about this book by Vincent Giard (on whom, more below) who suggested this to me after reading my recent comic Badman’s Cave, in which I redrew an old western comic, removing the figures and abstracting some of the objects. In this book, created for Grandpapier’s “24 heures de bande dessinée” in 2009, Trahan has also redrawn an old western 24 heures pour Doc Silver (1968). In a loose black line, Trahan starts with redrawing the full contents of the panels. The story has the Doc looking for disappeared people, one quickly realizes, not people who have been kidnapped or run-off, but those who have literally disappeared. At one point he speaks to a woman who is invisible. Across the course of the comic, more elements of the story-world begin to disappear: characters, words, objects, setting, even panel borders. The penultimate page is a few panel borders and some hatching, the last is blank. Beyond this level of the comic, the captions set-up a framing narrative. An unnamed and unseen (though I guess that is him on the cover) narrator speaks in black caption boxes that pepper the story: the comic we are seeing is a film the narrator is watching. The narrator is confused by the film, watching as the sound goes out (the words balloons are emptied), as the characters disappear. Soon even the narrator disappears. The comic is haunting in its way, not through the emotional pull of the western story but through the slow disintegration of the world. I’ve read and reread this book a number of times, something in it speaks to me. Sure, I love formalist art like this, but there is more to it than that. You can read it yourself (the words are in French, but almost half the book is wordless) at Grandpapier.

Lecture à Vue: La Mauvaise Tête Dessine Alto by various (Colosse, 2010) – This anthology features a group of six artists (La Mauvaise Tète) making adaptions (very loose ones it seems) of works from the publisher Alto. The included artists are David Turgeon, Vincent Giard, Jimmy Beaulieu (who is also the publisher of Colosse), Julie Delporte, Sébastien Trahan, and Catherine Genest. Perhaps it is just the artists’ styles, but I think the loose adaption concept ended up causing them to create stories that are quite open. Almost every story in the book has the pleasing quality of feeling unexplained, not too wrapped up, never completely clear. Because of this, the stories lend themselves to rereading. This is one of the most successful anthologies I’ve read in awhile (probably a combination of the theme and the group coherency). A few comments on my favorite pieces: 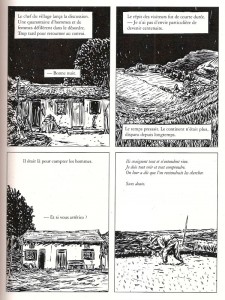 Page 61 from Lecture a vue. From Trahan's La reduction.

Trahan’s 24 page story “La réduction” is the longest in the book, a story that I find hard to explain. The images all have the look of being photo referenced (though not photo realistic), showing images of China. There are no apparent characters shown, the images coalesce around setting and occasional scenes (people waiting in a train station, crowded city streets, empty plains traversed by train tracks). The narrative captions which provide the main narrative thrust of the story are elliptical, telling the story of Monsieur Ho (which is the title of the novel Trahan is adapting) a officer of the census for the Chinese government who seems to lose himself in the country, in thoughts. I am guessing, based on the title, that Trahan is taking text from various parts of the novel to create a reduced form of the story (kind of like the Oubapian procedure reducing a comic to one page formed from various panels from different places in the work). Overall the mode is quite evocative. I sure wish Trahan made more comics, because the two I’ve read so far are really fabulous.

David Turgeon’s “La Thrave: un introduction” is basically a man explaining a strange tarot-esque card game to a women. The art is almost exlcusively simple frontal images of the man and the woman punctuated by more detailed images of various cards in the game. The narrator’s story winds around to autobiography and the blurring of boundaries between the game and life. It’s a credit to Turgeon’s writing that the repetitive imagery does not get boring and how effectively the card images work with the narrator’s monologue to suggest untold aspects to his tale.

Vincent Giard’s “Le trou dans les nuages” (“The Hole in the Clouds”) is only four single panel pages, yet it succeeds as a short and mysterious narrative about a strange object on a beach that seems to be sucked up into the sky while observed by a crowd of people. I’m also a big fan of Giard’s style, an unvarying line that is both angular and curved punctuated by black shapes. The figures have a certain cartoony minimalism to them. 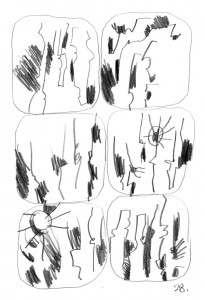 Jardin Botanique by David Turgeon (Colosse, 2011) – This book is subtitled “bande dessinée automatique”, automatic comic, which I assume is automatic in the sense of Surrealist automatic writing, where the writer just lets out whatever comes to mind, trying to bring forth the subconscious’s narrative. In this case Turgeon has created an abstract comic filled with organic forms. It does not have the slow transformation of an organic “character” that a number of abstract comics have, rather Turgeon’s images are unstable and shifting never clearly staying long with any single identifiable “character”, hinting at (partially because of the title) trees, flowers, insects. What starts as predominantly vertical images, evoking dense tree trunks, moves through a number of stylistic sections. The verticals slowly give way to smaller rectangular shapes then to scribbled forms that seem like insects flying about. A two page spread is dominated by areas of dense parallel shading. Another section is composed of short hatch marks. At one point I can almost see small, loosely drawn stick figures. Turgeon creates rhythm and motion through the not quite chaos of his pencil marks’ repetition and variation. The gestural marks bring to mind a kind of abstract expressionism in pencil. The cover image rhymes with some of the internal pages but is drawn in a plethora of colors (I can imagine the whole book done this way, it would be lovely). Originally published in 2006, an excerpt from this would have made a nice addition to the Abstract Comics anthology, as nothing in that volume has quite the same feel. You can read an excerpt at Turgeon’s site. 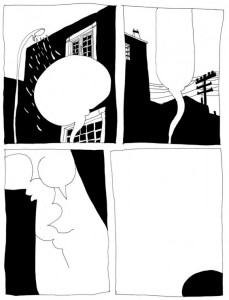 Laisse Tomber les Filles by Vincent Giard (Colosse, 2010) – A collection of shorter pieces by Giard. Like the comics in Lecture à Vue these stories all leave much unsaid, in this case literally, as the two longest stories in the book eschew any real text. One story follows two men one evening as they walk around town and head into the woods (you can read it online here). Throughout the pages the two men are conversing yet Giard has erased through the center of the text, obscuring the actual words. One can occasionally make out a letter of a partial word, but except for two phrases we are left outside their words. At one point the phrase “Her tiny pyramids” is completely unobscured, while later on the last two balloons in the story are crossed out but readable. I should note that Giard has subtitled the French text with English at the bottom of each page. This text is obscured the same as the text in the balloons. Another story (which you can read here), which starts with the image of empty word balloons popping out the window of a building, takes place at a party where all the word balloons are left empty. The interaction between the characters is almost completely opaque because of this. Two men fight for reasons I cannot fathom. In both stories Giard slips into abstraction for a brief few panels, the shift away from representation echoes the incomprehensibility of the dialogue in the stories. Without really being able to articulate why, I love Giard’s style, especially in that second story, where details seem unnecessary and the lines are crisp yet not too precise.

For some of Giard’s color work, check out this awesome wordless comic.

You can view Colosse’s catalog here. The books are printed in very limited runs, so many of them are sold out (though Cinema, Jardin Botanique, and Lecture à Vue are still available), but they put out new volumes pretty frequently.