Chosen as a Notable comic for The Best American Comics 2013

I made this comic for a class I took at SVA this summer (thanks to Tom Hart and Matt Madden for critiques). It is a silent, characterless diptych. Part 1 features a series of images appropriated and redrawn from a number of 1940’s-50’s film noir. Part 2 takes its images from contemporary daily life. The two parts are mirrored in a number of ways.

You can read this in two forms. There is the more traditional printed form and the horizontally scrolling web version that overlays the two parts of the diptych. (If you’re going to link to this comic, please link to this page not the web version.)

Comments from the outside world:

Okay there haven’t been many but Matt Madden tweeted this: “My interns just discovered a copy of @madinkbeard’s Big Sleep-derived comic and HAD THEIR MINDS BLOWN”.

“Badman’s newest print comic is a really beautiful study of human environments, and by extension the (unseen) human characters and actions that inhabit them. The comic is split in half between the past and the present – the former represented by a series of location shots taken from old noir films like The Big Sleep and Kiss Me Deadly, while the latter is taken from Badman’s own home, presumably. Each panel is silent, but of course, taken all together, the images decode whatever narrative they serve as evidence for. Not to say that it’s entirely about what’s not shown. There’s a pleasure in observing the scenery for what it is, each frame drawing attention to that which exists all around us. “Backgrounds,” as they’re tellingly referred to as, are often given short shrift by cartoonists (implicating myself here, of course). This work serves as a testament to how much power environments can have on their own, both narratively and poetically. It doesn’t surprise me that Badman also has an interest in abstract comics, because if we expand the preceding idea, it includes any image at all. It’s not abstracted figures that make up comics, but the sequenced image at its most basic. But that’s probably an argument for another day. Really enjoyed this.” –Kevin Czap

“Untitled is one of his most successful comics to date. […] This comic is a witty depiction of how we read, comprehend and contextualize images.” –Rob Clough 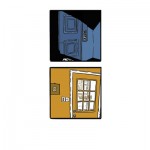 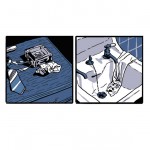 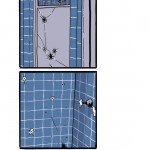 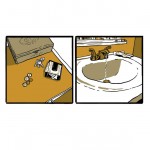 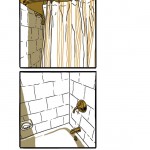