These are two similar works by the artist Pascal Matthey from the Belgian webcomics site Grandpapier.

Over ten four-panel pages “Greenfield Village” does not so much tell a story as create a space. I am tempted to call it non-narrative, one might find the hint of a narrative across the images but no real story is formed. Most of the panels show fragmented images of what I can only assume is the village of the title: cropped off buildings, trees, bridges, sidewalks, fences, streets. Some of the panels show small figures, isolated or integrated with the scene. The collective image formed by the panels is a quiet village from some past century.

The hint of narrative comes from two repeated characters–two women, perhaps mother and daughter–who appear together in a number of the panels. Are they walking through town, thus setting off this fragmented tour of the scene? Nothing is explicit. Two clocks appear (one of page five, one on page ten), both showing the same time. No time has passed. Are these panels all simultaneous? 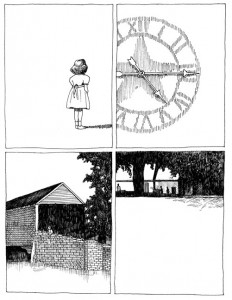 Matthey’s art is simple black line work with hatching. The images have the look of being photo referenced, though clearly Matthey has composed his panels independently of any references. He makes frequent use of negative space. A building is pushed to the bottom of a panel, showing only the roof and white space. A street scene–sidewalk, a person, a building–is pushed to the top of the panel, leaving another wide swath of white in the panel. The figures are often shown in whole but shorn of any background. The whole effect is one of space, lightness, quietude.

“A la plage” [At the Beach] is quite similar to “Greenfield Village” though visually more dense. The 15 six-panel pages are drawn in colored pastel (I think pastel). As the title indicates the comic shows images at a beach town. Based on the clothes and cars, it is some time in the mid-20th century. Like the previous comic, cropped and photo-referenced images seem to be the order of the day. Instead of negative white space, here Matthew’s panels are predominated by the dense, multivariate orange of the beach and the lighter blue of the sky/ocean. People are much more prominent, we see all manner of people on the beach: lying, swimming, playing, walking. While a few people or things are repeated in small multi-panel sequences, at no point do I get the sense of any narrative flow. The work creates a scene in detail, one that is clearly evoked. 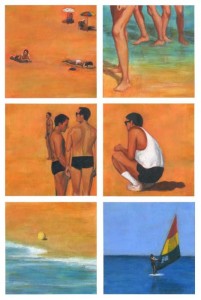 Page 9 of A La Plage

Both of these works are quite lovely comics. Both are what I might call, description comics: comics that, instead of telling a story, simply describe something (in these cases a place). Work like this is a rarity in comics: representational (not-abstract), non-narrative, yet not non-sensical. Go read.