That’s the story of Travel.

Or we could say: Three man buy tickets, get on a train, find a seat, look out the window, smoke cigarettes, get off the train, and walk to the ocean.

That’s probably a better description of the story.

Of course, this is a Yokoyama manga, so these banal events happen in a world filled with outlandish looking characters, weird buildings, inorganic landscapes, and lots of speedlines. Sitting down requires speedlines, giving it the intensity of a fight in a more conventional manga. A fellow train passenger pulling a book from his jacket offers as much menace and tension as a gunfight. The everyday becomes exciting. Oddly, the exciting also becomes kind of banal.

As I read Travel, I found my self more attracted to his depictions of the most ordinary events than to his wondrously odd buildings, landscapes, and characters. His precise lines and almost flat geometric rendering makes everything seem robotic. The imaginary world the train travels through seems so lifeless, yet the things that exist in this (our) world take on a new power and beauty when filtered through his style. It is a strange shifting of convention. Shouldn’t the attraction be the fantasy, not the everyday?

Yet, the most interesting parts of Travel are the these everyday occurrences. Two examples: 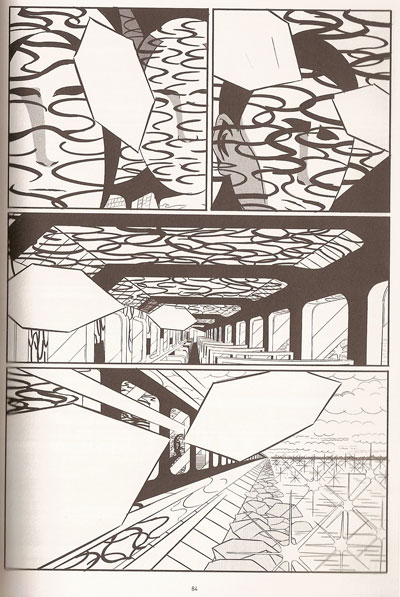 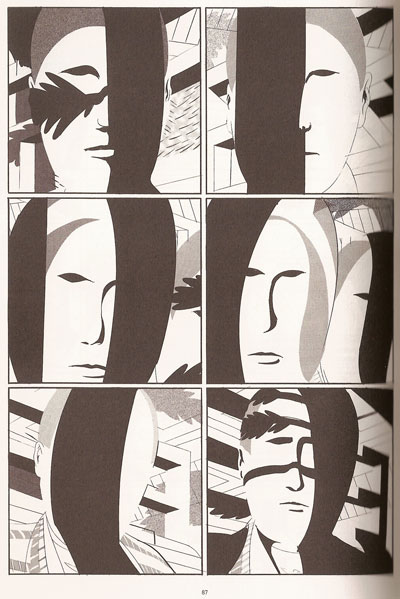 Remember to read right to left

These two non-consecutive pages are part of the same sequence where the bright light of the sun shines on the train, first reflecting off water, and then being blocked by trees which cast dark shadows onto the train. In both cases the pages take on a depth and beauty that is missing from most of the work. Note how the dark shadows in page 87 are shown quickly moving across the three characters faces. It’s an evocative moment that feels so powerfully real despite the weird characters and their odd landscapes. The same can be said for page 84 with the rippling shadows of the water playing off the characters and the roof of the train cabin. Both pages feature abstracted shapes and textures (the diamonds of light on 84 and the black shadows on page 87) that provide an all-over composition and rhythm to the pages. The book is worth reading for those pages alone. 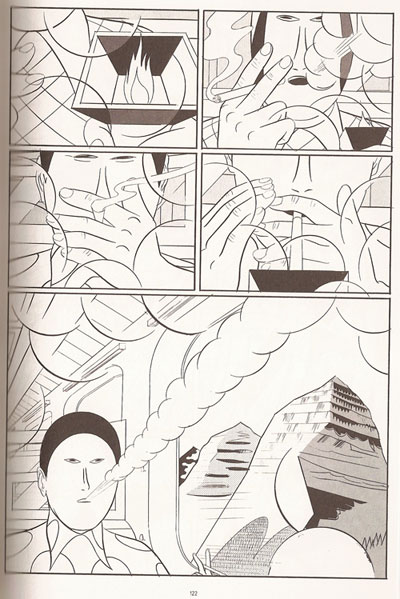 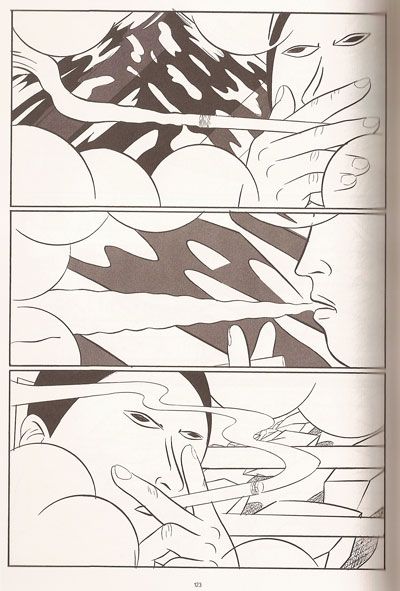 This two page sequence find two of the characters smoking on the train (now we now it’s a fantasy world). Yokoyama imbues a certain dynamism and abstract beauty into this plain action. Again abstract shapes, in this case the arcs and circles that represent the smoke, dart across the panels and pages, filling up the space (like smoke) and, in the second page, closing in around the characters. Yokoyama makes the smoking even more action filled by using the larger panel at the bottom of the first page to emphasize the movement of the exhaled smoke and by using strong horizontals on the second page that echo the speedlines that proliferate in the rest of the book.

Yokohama is extremely skilled at pacing and composing his work. Despite the abstracted imagery and the imaginary landscapes, he always managed to convey a sense of space and movement. The panels read fast like the speed of the train. Everything is in high gear.

This book includes commentary on the story (almost page by page) by Yokoyama at the end. The relationship between the work and the commentary is a strange one. He adds descriptive detail that would be impossible to guess in the comics, or he describes something quite obvious (“the character in the second panel is carrying a comb in his pocket” and, yes, you can see the comb there). He comments on some panels as if he didn’t the truth of his statements (“this station seems to be in the middle of nowhere”). Sometimes he provides autobiographical points (a building is taken from one near where he drew the book). Unlike the copious annotations used in Carla Speed McNeil’s Finder these commentaries do not really expand greatly on one’s experience of the work. Yokoyama, unlike McNeil, is not world building. I’m not sure what he’s doing. It is amusing, though.

[This is part 18 of a 30 part series where I am writing daily reviews for the month of December.]