I really like this book, but it took my awhile to come around to that. My first time through it (must have been awhile ago now) I didn’t really think much of it. Not that I thought it was bad, but I just didn’t… think about it. I pulled it out of a pile for this reviewing project, and ending up reading it a few times in the past couple days.

The Hot Breath of War is divided in six parts. I’m not sure what to call the thing as a whole. It’s not a novel-like continuous narrative, nor is it just a collection of disparate short stories. There is one character that appears in half the sections. It’s not exactly variations on a theme, though I feel the presence of an underlying connection without being able to articulate it. War is a common thread through most of the stories, as is the theme of people attempting to make personal connections with each other. 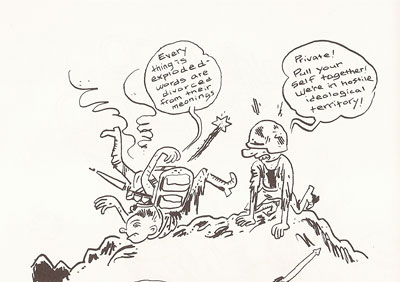 Perhaps it is appropriate that I find it hard to articulate a description of this book. In the first part, we find two soldiers in some kind of war (Afghanistan? Iraq?). Their tank is blown up. One of them says: “Everything is exploded, words are divorced from their meaning.” They then meet two native men who joke around with the soldiers and the language barrier. This section is drawn in the most caricatured style of the book. The one solider bears a resemblance to Beetle Bailey, and the story even ends on a plop take. It’s a satiric story, where the one soldier calls in an air strike that rebuilds the native chief’s home (“asymmetric warfare” he claims).

This jokey atmosphere is belied by the last story in the book where we see what seems to be the same two soldiers. The one is tending bar for the other, who is shown in a wheelchair, bandaged up and missing half a leg. The single most emotional picture in the book is a silent panel of the bartender hugging the man in the wheelchair. It’s one of the last images in the book and it hits the emotional core amongst the war and people trying to connect. 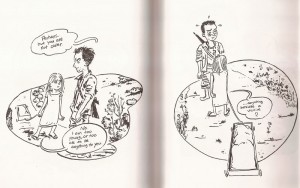 The bartending soldier also appears in part five, which reads like some kind of play. The soldier, on his way back from the war, and a young girl, pulling a wagon that bears her dead mother, meet on a road. They talk in a mannered way (clearly a purposeful stylistic shift from the rest of the book). The girl notes that as neither a baby to be saved and adopted nor a woman to be physically loved, she can be nothing to the soldier but a victim. It’s a strange yet moving scene.

Two of the stories are less war and more love. The second part finds a young man named Mason going out on a date and later trapped on a public telephone as the ocean waters rise and flood the city. He is left on a phone but, having lost the phone numbers of his two girl friends, unable to communicate with anyone. What starts as a rather banal man-seeks-sex story becomes a natural disaster of some kind. No war here, yet Mason, as he heads out into the night, notes the “hot wind” blowing through the city, perhaps another form of the “hot breath.” His world is also not without its violence. A party he attends has an ongoing fist fight in the background, while the sex he has with his date is drawn like a cartoon fist fight: a cloud with body parts sticking out and little stars surrounding it. 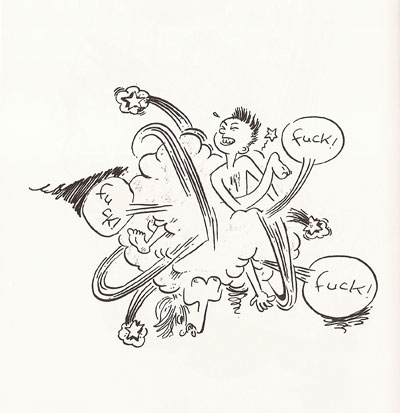 The other part finds another young man looking for sex, this time unsuccessfully, leading him into anger. Meanwhile the girl he fails to sleep with wanders off with a laid back anthropomorphic cat, who’s dressed like a hobo.

One of the parts, unlike the others, seems grounded in a historical moment. It takes place during the Spanish Civil War (one can infer such). It is the only part that uses conventional rectangular panels and a less caricatured style. It is also the most direct story. For all these reasons it provides an incongruous bump in the book. By virtue of its difference, it must have some special significance, right?

Alixopulos has a dynamic cartooning style, very loose and caricatural. He packs a lot of energy into his images and makes plenty of use of cartoon iconography throughout. He eschews panel borders and averages two to three panels a page, giving the pages an airy appearance. Often his images have scribbles and hatches and curves that serve in place of borders to hold in some of the images. He’s also surprising good with his prose. The narration in different parts of the story are not only well written but take on slight variations in style. It’s nice to find a cartoonist with an ear for prose.

This review is pretty scattered. I don’t really know what to say about The Hot Breath of War. I’m not sure what Alixopulos is aiming at, and I’m not sure if he hit it, but I enjoyed the ride. I’ll keep an eye out for his next book.

[This is part 17 of a 30 part series where I am writing daily reviews for the month of December.]