According to an interview with him in The Comics Journal 299, Joshua Cotter drew Driven By Lemons in a sketchbook straight through with no planning and no editing. This edition is designed as a sketchbook, what I assume was a moleskine with rounded corners, black cover, and pale yellow paper. Given its origin, I couldn’t read this expecting a straightforward narrative. A two page spread early on in the book is filled with prose, what reads like Surrealist automatic writing (put pen to paper, write without thinking). Like all automatic writing, the prose is a bit hard to get through. Thankfully, once you get past the prose, the comics pages themselves are much less burdensome to read.

Narratively, Driven By Lemons has a protagonist, an anthropomorphized rabbit who at times resembles a slightly scarier and rougher version of Lapinot and other times a more minimal form of Hello Kitty if she were a boy or a Keith Haring character (if they were rabbits). The book has a number of distinct sections (helpfully named in the table of contents) not all of which have a explicit connections to each other, though as I read and reread, the implicit connections became more clear and an overarching conception of the book as a exploration of the rabbit’s mental health became more clear. This narrative centers around a long sequence of the rabbit in a hospital bed.

Early on a truck falls from the sky amidst a cityscape. The rabbit has some kind of wiry machine attached to his mouth, which he tries to remove by attaching one end to a train and the other to a column on the platform. He ends up in the hospital and has some kind of vision or… I don’t know. Throughout there is a questioning both in the text and in the images of reality.

A number of the sequences (perhaps most of them) have a slowly building loss of control, a container that is released, exploded, expanded, untethered. Cotter turns to abstract imagery to represent this, and these are the most lively and lovely sequences in the book. Those sequences and many of the others in the book are based on repetition and variation both in his layouts and his composition/content. I find the book as a whole much more interesting from a formal viewpoint than from how it holds together as a narrative.

Here’s a really great short chapter from early on in the book (pages 16-19). Cotter uses complete abstract imagery, but mixes it with narration that gives a greater contextual meaning to the squares, triangles, and circles. 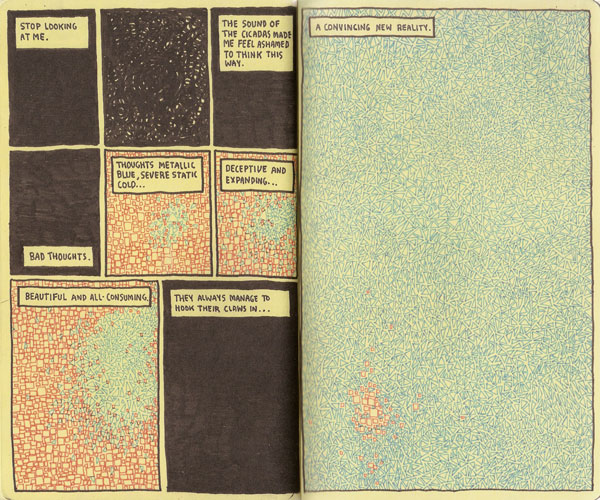 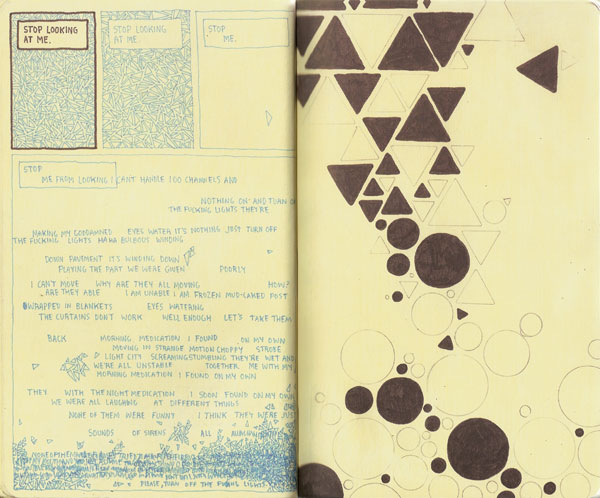 The colors play an important part here. Most of the book is black/white/gray with only the occasional insertion of colors–most often the colors seen above, which I’m pretty sure are 100% cyan and 100% magenta (in the CMYK system of color). The narration clues us in to the “metallic blue” “bad thoughts” (notice how that phrase is placed low on the panel, as if is said after a pause, with an element of shame (like someone lowering their head as they say something they are not proud of)) and their “expanding” which we see in the panels. “Beautiful and all-consuming” is emphasized by the actual beauty of these panels. It is telling that the blue shapes are angular triangles, much sharper than the magenta squares.

The use of black panels is like a kind of blacking in and out of the consciousness, a consciousness which, based on the previous/subsequent scenes, appears to be involved in a car accident. On the second spread the blacking in and out becomes a slow fade out as blue (cyan) replaces black and the narration becomes considerably less coherent and restrained. The “stop looking at me” text is first about blackness, a presence that is heavy, while the second “stop looking at me” becomes a removal of presence. As if, first the command/request is accompanied by an attempt to cover up, while the second iteration is about disappearing, avoiding. The warm squares are completely lost by the second spread and then even the cyan becomes black as circles are added to the equation. I have no idea what the circles are all about, but they continue on (with the triangles) into the next chapter.

They are some other really wonderful sequences in the book, often abstract. I find myself more interested in this book during the abstracted parts than the more representational sections with the rabbit.

[This is part 19 of a 30 part series where I am writing daily reviews for the month of December.]