Way back in September of last year, I discovered the work of Aidan Koch and wrote about two of her short comics. I began that post:

Sometimes I read a comic and it reminds me that comics can be narrative without being clear, character driven, or plot-based. Comics narratives can be abstract, allusive, elusive, elliptical, yet still visual rich and… poetic.

A couple months later, I wrote about two more of her minicomics:

I can’t even begin to make words to really describe or interpret the comic. I don’t really want to. The combination of the words and the drawings go beyond any clear literal meaning.

I included her works on my best of list for 2009. So needless to say I was very excited when the first announced book for Blaise Larmee’s Gaze Books was a longer work by Koch.

The Whale is a small (5″ x 7″) thin (64 pages) book that fit perfectly in my coat pocket when I took it to the local cafe to enjoy over some coffee. The design is exceedingly simple, no text on the back cover, no information about the author, just a very small indicia. The cover is lovely, primarily light blue except for the title, author’s name, and a cut-out white circle over part of the image. The pencilled image is, I believe, crashing waves, though they are dark and jagged enough that they might also be the abstracted tops of trees in the distance. Texture, tone, and ambiguity, it’s enticing.

The whole book is drawn in pencil, with a varieties of tones, clearly showing the stroke of the pencil. The pages are often sparse, with very few panels, the drawing is realistically proportioned but abstracted in details. They are simplified yet often quite allusive and attractive. There are some panels, pages, and sequences that are just wonderful. Here’s an early spread: 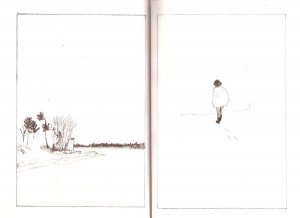 And an abstracted page of water: 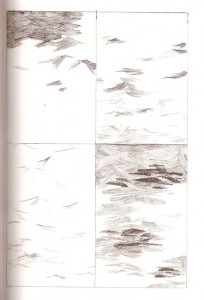 Unfortunately, as a whole narrative, The Whale is doesn’t quite hit the mark, perhaps even more sharply when compared with her previous work, and the qualities I really loved about that work. If “Little Flashes” and “Hypnotizing” were allusive, elliptical, and poetic, The Whale is all too direct and lacking in ambiguity. The story follows a woman who has lost her husband/lover/boyfriend in a car accident. She is in mourning, living alone with her dog along the shore. The narration by the woman too easily spells out the situation and I never really felt the sadness that, I imagine, should be the conveyed emotion.

If in her earlier works, the words added mystery, a connection with the images that required thought or imagination, the words here are too much a simple narration. The best moments here are the silent ones, where the reader must make the connections or where the narration is more emotive than descriptive.

I think there is a really excellent potential comic hidden in these pages, to be found in those quiet scenes and in some more visual way of drawing out some of the narrated information or in an more allusive way of narrating. The woman walking on the shore with her dog. The woman taking the deceased’s stone and shell collection and returning them to nature. A whale washed up alone and far from its natural habitat on the shore. There are scenes, symbols, and ideas that really work here, but they are all connected too literally with explication and narration that says too much.

The least successful example of this excess being a scene where the women sees and talks to a ghostly figure that appears in the row boat she’s travelling in. The scene is played too long and the ghostly figure, by its actual representation, ends up looking a little silly. 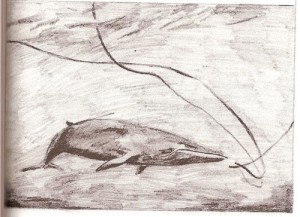 One of the more powerful images is a semi-abstracted seascape of penciled waves and a silhouette in the water of the woman, up past her waist in the water. From her body emits these three sinuous lines, lines that echo an earlier image of the whale swimming underwater with very similar lines emitted from it, as if it were calling out for help. They make a powerful pairing, only a few pages apart, yet the scene with the whale seems too directly narrated, playing out quickly and at a distance (the woman tells us about the whale, but we don’t see her seeing/experiencing it). And both scenes are narrated retrospectively which distances the reader from the events some. The woman is past them and so are we. 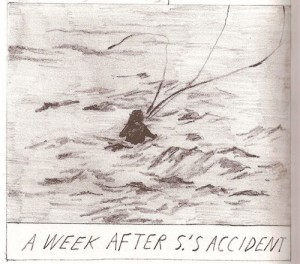 The edition I got (the limited one) came with a small etching, a photograph (of the shore, perhaps a photoreference for the book), and a series 4″x 5″ cards, printed in black and blue, showing images related to the book, some are directly from pages others are more like alternate panels. They are quite lovely and simple. Quiet images of the girl on the beach, waves, shells, the whale’s tail raising from the water, a field of grey pencil marks, and others that form their own version of the story, silent and elliptical.

Perhaps my expectations were too high, but I think The Whale suffers from a lack of… discretion? Or from an excess of explanation. Perhaps Koch’s skills are more attuned to a shorter work, where the limitations of space force a different method of narration and monstration. For instance, one of her recent minicomics “Vastness No. One” (you can see an animated gif page through of it) is a collection of five “short stories and poems.” They are drawn in a very similar pencilled style (though the production values make the images much less crisp and tonally rich), but they are each extremely short, packing in images and text in a way that leaves room for the reader to wander. The emotions of the short stories remain slightly ambiguous, slightly unclear, but in a way that really works to draw out some emotion.

For most plot/character driven art, clarity is a virtue. You want, for the most part, a clarity that allows you to follow the events in the story, to understand the characters, to locate the scenes. Joe Sacco’s work wouldn’t convey the messages he wants to convery if I couldn’t follow the narrative he is unfurling, Jaime Hernandez’s work would be just pretty pictures without narrative clarity because so much of his work is about the accretion of actions and words in the character’s lives. But with a poetic narrative, clarity will often lead to cliché and obviousness. One thing I love about Warren Craghead’s work and in particular his “How to Be Everywhere” is how it lacks a certain narrative clarity. I don’t always “get” everything, but it keeps me reading and thinking and rediscovering. To me, that is what is lacking from The Whale, but which is so successful in Koch’s shorter works.

But, regardless of this shortcoming, the images are great, the book is a nice object, and Koch is a talented creator, one whose talents I am certainly a bit jealous of. I’ll keep my eye out for more of her work, as she is working in an underutilized vein of comics. I know you’ll be able to see some of her work, including the cover, in the upcoming issue of Secret Prison and she’s also in the latest Mome (#20), in a shorter form that one hopes will showcase her talents to a larger audience (I haven’t seen the issue yet, unfortunately).

FYI: Some short comics have been going up irregularly at the Gaze Books site. The most recent one is a one page piece from Koch. You can also buy some of her recent minicomics at her site and browse some of her other work.

Addendum: Only after writing this did it occur to me that the story could be autobiographical… though I hope not.