New York Review Books publishes quite a number of excellent novels, including one of my favorites Witch Grass by Raymond Queneau. This Italian comic from the 1969 is certainly a bit of an odd choice for them. Outside of the works themselves, I’ve come to expect two things from NYRB’s publications: nice consistent design and great introductions. Their books have a very effective and visually distinct design that stands out on a shelf. They also tend to have good introductory materials to put the work in some context (like the amazing introduction by William Gass to the I’ll-never-actually-read-the-whole-thing Anatomy of Melancholy). They dropped the ball on the latter for this book. Who was Buzzati? Where did Poem Strip come from? Was it written more like a poem in the original Italian? Did he do other work like this? Were there other books like this in Italian in the sixties?

I have no idea. The book offers a paragraph long author biography and nothing else. That context would have been interesting to have, so I did some searching in a few literature and art databases. Not a lot out there in English. I did find two 1970 reviews from major publications, which offer an interesting insight into how this comic was considered by critics that were surely used to dealing with text only books.

“This frightening, lyrical and provocative poem in color and black and white is typical of the growing interest of many well known European authors in visual mass media, and particularly in the “superior comic strips,” which are enjoying great success among sophisticated readers in France, Italy and Germany.” Slonim, Marc. New York Times (26 Apr 1970): 49.

“The story is presented in a strip-sequence, made up from stills in which the characters think and talk by means of captions or balloons coming from their mouths. Buzzati makes use of this technique in a most sophisticated way, by accompanying his elegant and slightly surrealistic text on the theme of Orpheus and Eurydice with bizarre and surprising coloured pictures, whose authorship is not revealed.” Anon. Times Literary Supplement (18 Sep 1970): 1029.

At least the New York Times reviewer deigns to use “comic strips” in his description. The TLS review seems familiar enough with comics to know terms like “balloons” but dares not write the word “comics.” I’m also amused that he or she seems to not consider the possibility that Buzzati both wrote and drew the book.

Neither of those offer much context to the book, and all else I found about Buzzati focused on his literary works. So we must read this shorn of explicit context, though its 60s origin is fairly obvious when you get a look at the protagonist.

On my first read through, it took me until page 48 to realize that the protagonist “Orfi” was code for “Orpheus” and that this story was a play on the Orpheus/Eurydice myth (Orfi’s love is called Eura). Buzzati starts with the set-up of a musician and his lover dying, continues with the hero’s trip into the underworld/afterlife, but the story spends much more time on the underworld itself and takes a different path at the end of the story.

Buzzati’s underworld is a land that looks similar to the world of the living, but it is differentiated by certain vital voids: time does not pass and, without the fear of death, many of life’s most powerful feelings are non-existent. I am tempted to say how Freudian it is that Buzzati gives the fear of death such a prominent and driving force in his view of human life and how much it is linked to love/sex. (Though my Freud is only half remembered at this point.) 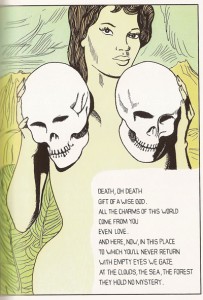 Not too subtle. And this is one of the more covered-up women in the story.

The most evocative section of the book occurs when Orfi sings a song for the residents of the land of the dead. In it he lists moments of fear and uncanniness that are missing from the land of the dead, where death is no longer a threat and mystery seems absent. In a sequence of full page images, Buzzati’s images are both eerie and lovely, part Surreal, part De Chirico, part comic strip. Here are a few I particularly like. 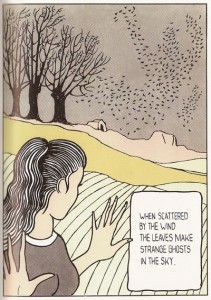 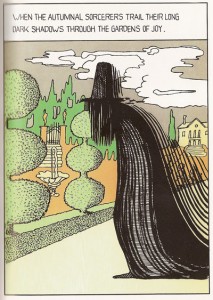 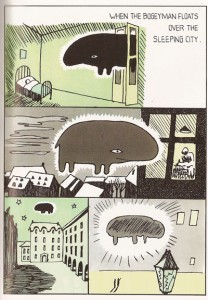 The “Autumn Sorcerer” is, for some reason, really disturbing to me. The “Boogie Man” on the other hand is almost comical in appearance, like some kind of cheery and benevolent creature in a Miyazaki movie.

Poem Strip is not at first glance the most traditional of comics. Most prominent are full-page images with textual captions, often long captions, looking more like an illustrated story than a comic. But also found in these pages are multi-panel pages, word balloons, and text that more directly interacts with the images. At times a long passage of text on one side of the spread is accompanied by a large image on the opposite end with a repeated passage from the text placed under/over the image. This strange little shift into a more conventional illustrated text is rather disconcerting. A comics reader used to a steady right-left-up-down reading path stops at a repeated passage of text that is clearly not repeated as a stylistic trait of the text itself.

Buzzati’s images are stylistically inconsistent, veering from figures that were clearly drawn from life or photographs to figures that look like they were drawn by someone who only had a vague idea what a person looks like. While I’m often in favor of stylistic variation that is integral to communication/meaning/theme, in this case I found it often distracting, amateurish, and unmotivated by the content. Thankfully these cases are not too prevalent. More prevalent are stylistic variations that fit the work’s use of embedded narratives to create a sense of different stories (or, often in this case, songs) and perspectives. Some of the images are wonderfully eerie and odd, while others just look silly (again, see those images above). Some are stiff and formal, while others are wild and expressive. 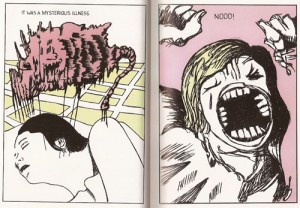 The book also is the clear creation of a male artist. Rare is the woman in the book who wears clothes (even fewer those with more than some kind of negligee on). Too many of the woman look like they were drawn based on photographs from some kind of softcore girlie magazine. I’ve seen other reviewers reference this book as erotic, but I find it hard to see that in these images. It is also telling that Orfi’s male antagonist, the gatekeeper of the underworld, is a talking empty suit jacket. Yes, you read that right. A talking, rumpled suit jacket is the one who finally lets Orfi search out his love in the underworld. The suit jacket is surrounded and seems to command all the naked temptresses. 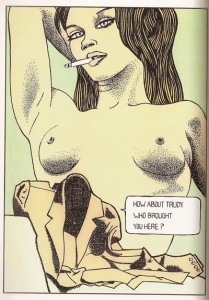 Suit jacket tries to tempt Orfi with a woman. Click for larger.

I have mixed feelings about this book, and give it a lot of allowance for its context. Buzzati offers some fantastic imagery mixed with some ugly and poorly drawn imagery. This is certainly unusual for the time period, another book to add to those graphic novels before the case listings.

[This is part 16 of a 30 part series where I am writing daily reviews for the month of December.]