Most comics are a blending of story and art, exceptions are rare (plug that Abstract Comics Anthology I’m in here). A comics creator must be both writer and artist, mixing two not necessarily related skills. While most have balanced skills, rare are those who truly shine in both areas. Often one skill outshines the other (might we point to the prominence of autobiographical comics as an indicator of those who are more artist than writers). The mainstream system of divided labor has the advantage of having writers make the story and artists making the art, letting each play to his strengths (at least that’s the idea). You could probably have a fun conversation out of discussing the relative writer/artist balance of various cartoonists. It’s not always possible to nicely divide what is art and what is story, but in some cases these divisions are foregrounded.

Le Voyage brings on these thoughts. Baudoin is a wonderful visual stylist–his art is dynamic, engaging, lovely to behold–but his writing, or at least the story of this volume, is far less interesting, in fact it seems rather clichéd to me. Simon, the protagonist, one day leaves his wife, child, home, and job and starts off on a voyage. This flight is unplanned, rather at the breakfast table his head strangely opens up and starts showing images above it. The first page starts with his wife telling him that he can’t take their cat on vacation, and the image of the cat appears as if on top/coming out of his head (at first you might think it is the cat, but you can see the cat still sitting there). Then as his wife starts talking about visiting her brother on their way to vacation, the cat on his head becomes encased in a cage after which the image/cat jumps away and the cage moves down around Simon’s whole head. 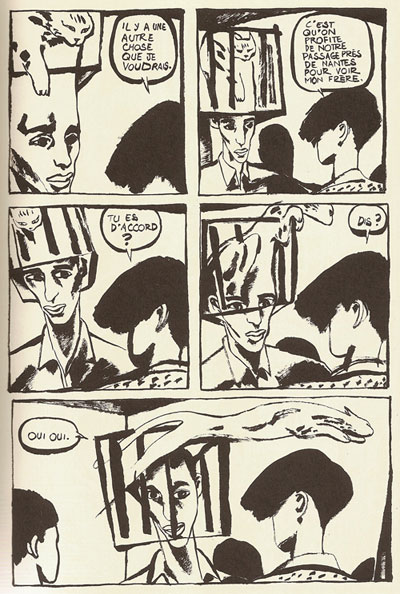 It is interesting to note that throughout this scene, Baudoin, despite his loose and ever shifting line work, draws the wife and the child almost exactly the same across a number of panels. During the first seven panels of the book, the wife is drawn the same in five of those panels, her head shown at the same angle with the same expressionless face. The child appears in three of those panel, each time from the same angle with the same expressionless face. On page three (above) again the wife appears repeated and unchanging (albeit from a different angle than the first two pages) in contrast with the man’s changing form.

This opening sequence immediately sets a theme (the man feels trapped, he must flee) and a style, the expressionist/surrealist images that fill the book acting as extra-real visual indicators of emotions/thoughts.

On his way to work, as he rides the metro, Simon’s head starts spouting out a flood of skulls. He flees the metro car. At this point, we’ve got the man with the wife who doesn’t let him do what he wants (very minor things), and the morning commute to his normal job, which is death to the man. Death! I’m not sure if we are supposed to read the wife as a nag or not — mostly because I don’t read her that way — but, because of Simon’s actions (and the way Baudoin draws her), it seems he does.

Later on, this idea is reinforced by an old woman Simon meets in a train. She talks about being on vacation, leaving her pets (fish) with a neighbor and visiting her brother on the way. She mentions how her husband didn’t like her brother, but it doesn’t matter cause her husband is dead. Throughout this scene, Baudoin makes the woman every more grotesque while a cage slowly builds around Simon’s head. We are clearly meant to equate his wife with this grotesquely portrayed old woman.

As the protagonist of the story, Simon doesn’t ever get critically evaluated by the stories. His actions are never questioned. To me, this places the protagonist close to the writer, an identification between Baudoin and Simon which was further gelled when I read in a brief bio of Baudoin, that he actually had a normal office job which he up and quit one day to make comics. (I’ve also read elsewhere that this is a theme he has revisited numerous times.) Though, here, Simon is no artist, in fact, as a character, he seems to exist purely as an empty vessel to meet the characters and events that are the plot of this story. A women falls in love with but you get no sense of why, what attracts her.

The story is a kind of middle class male fantasy, a grown up version of the adolescent power fantasies that fill superhero comics. Here, the male, trapped by job, wife, and child, escapes to an adventure, where he falls in love with a beautiful woman, makes a friend (with some homoerotic undertones), and gets to do what he wants without having to work. He can even pay lip service to his love for his child without actually talking to him at point between the opening and closing of the story (that is, he only speaks to him at the opening and closing).

Simon’s voyage ends when he calls his house and the answering machine only mentions his wife and child (it’s no longer his house, he says). And when asked what he learned on his voyage, the main lesson seems to be about having the woman he fell in love dance for him. There are a lot of other things going on in this story, but at its heart it is about a man who abandons his family and job to have a romantic affair.

Much of my dissatisfaction with the story is perhaps linked to the beginning and the lack of understanding of the man’s dilemma. What we see previous to his flight is brief and far too clichéd to allow any empathy on my part. And the ending also allows for the son to seem perfectly understanding of his parent’s split, ready to meet the new woman in his father’s life. I’m really surprised to learn that Le Voyage won the Alph’Art prize for best scenario at Angoulême in 1997.

So, yeah, the story has issues, but the art is lovely. You can’t fault Baudoin for his brush work, his dynamic line, his dry brush. Nor can you ignore the aforementioned surreal/expressionist elements of his images. This is most prominent in the form of the man’s open head. Throughout the story his head seem to open up and send out or take in images. This is used both as an indicator of his thoughts/feelings and as an indication of new ideas/perceptions coming to him from the outside world. For instance, at one point his new friend Olivier tells Simon about his own voyage. As Olivier talks, Simon’s head illustrates the narrative (see below). In the opposite way, the closed and expressionless face of Simon’s wife and children seem to express their closed off world. 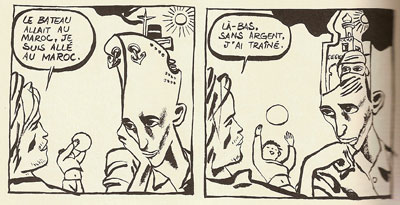 Also take note of the child playing with the ball in the background of those panels. Throughout the panels where Olivier is telling his story, we can see this child and others playing ball in the background. It seems unimportant (and easy to pass over, I did the first time through), until, at the end of Olivier’s story, Simon is actually hit on the back of the head by that same ball (some small revenge for abandoning his son?). It’s a rather subtle way to show parallel events/actions across a sequence of panels. You don’t see that much in a way that isn’t really obvious (the artist wants you to notice the background events as much as the foreground events).

Baudoin makes use of dry brush techniques to add some texture to his ink work. Note the feathery areas of this panel during a scene where Simon is on a sailboat on a stormy sea. 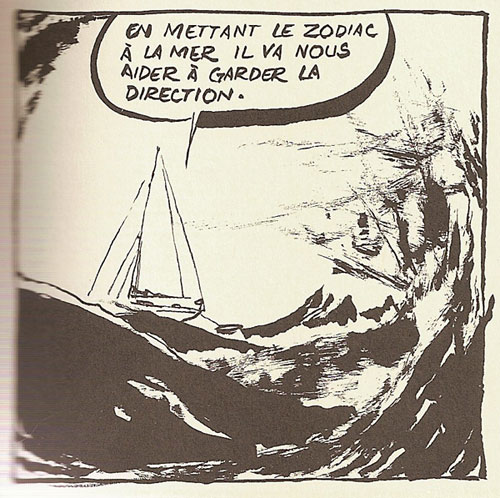 His drawing is loose to begin with but it really unravels and abstracts when he’s showing emotionally charged motion, such as fights, dancing, or sex. 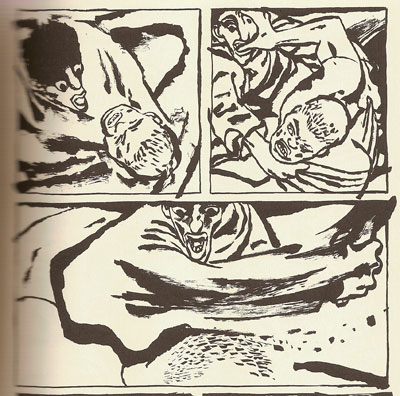 Simon struggles with another man. 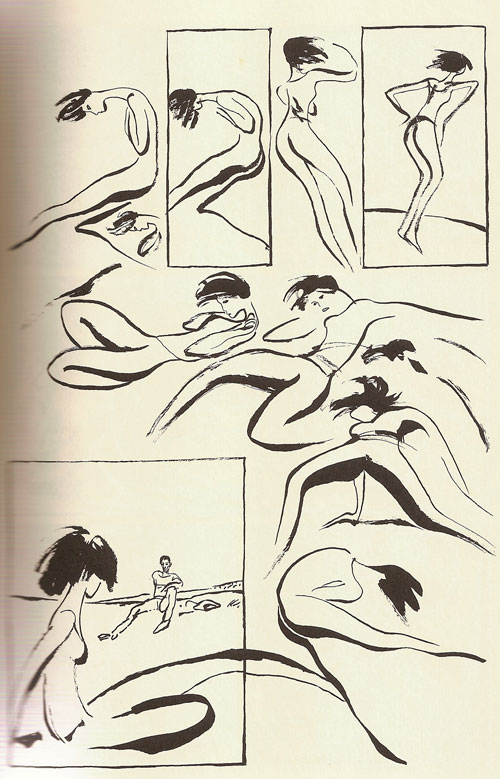 Despite my brief summary of the book above, there are parts of the story that are impressive if rather baffling, in particularly two scenes towards the end of the book. At one point, Simon sits in front of a large mountain that is reflected in a lake beneath it. His head opens up and the mountain is sucked in, the whole world seems to be sucked in and Simon, in the fetal position, travels through time starting at the big bang. We see him in panels with, in rapid succession: dinosaurs, cave men, knights, soldiers, tanks, etc. a rapid trip through successive eras of history. This is like some kind of meditative experience of one-ness with the world, though Baudoin provides no commentary on it, presenting it without any noticeable inflection. It is reminiscent of similar scenes in Tezuka’s Phoenix, though in that case, Tezuka never fails to offer religious/moral commentary.

This is followed up by a scene where Simon is hiking in the mountains. He reaches to pick some flowers just over a ledge (at least, I think that’s what he’s doing) and falls off. He grabs a branches further down and holds on for his life. His head opens up and lets out a long sequence of objects and people from earlier in the story, as if he is replaying the events of the narrative to that point. Some of the people that come out of his head seem to help him climb back to safety, though that is a little unclear. 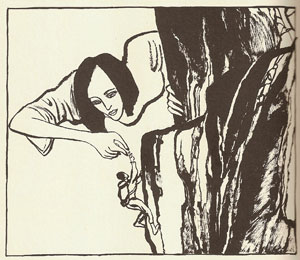 The image of Lea helps Simon up from the cliff.

If I were to attempt some reading of this scene, I have to equate it with being pulled back from the brink of suicide. While I think Simon is trying to pick a flower, it certainly looks like he is almost purposefully falling off the ledge. The images that come from his head then, might signal the ways he has come back from this potential suicide, capped off by Lea, his new lover, whose image offers him the last boost to reach safety.

Baudoin originally made Le Voyage in 1995 for the Japanese publisher Kodansha (it was in their Morning magazine). In an interview at du9 (translated into English), he notes how it allowed him to think differently about his work, in particular to stretch out scenes in more panels than he would in working with a traditional French publisher.

Baudoin is mostly non-existent in English, though I understand he is highly praised in Europe. I’ve been meaning to try some more translating, so I finished translating this book over at Comix Influx. It’s fairly light on dialogue (and has no captions) so went quick.