On my way out the door this morning, I pulled Hutch Owen: Unmarketable by Tom Hart (Top Shelf, 2004) off the shelf to read on the train. I was laughing out loud during my commute. I forgot what a great comic it is. Hart has a rough style that looks deceptively simple. But he’s clearly a thoughtful artist. The work is funny, political, and poetic all at once, no mean feat. This particular volume also contains one of (if not the) best post 9/11 comics I’ve read. Tom’s got a new webcomic running at Act-i-Vate.

Two things that jumped out at me as I read:

1) Prose in comics. There’s clear sense that Hart is not only thinking about images and narrative but also the actual prose he writes. I get the feeling most people don’t pay attention to this in reading comics. I know I tend to give it little thought. Perhaps this is due to a general lack of quality in the prose itself. Something to consider in the future.

2) Images in context. Take a look at this panel/image: 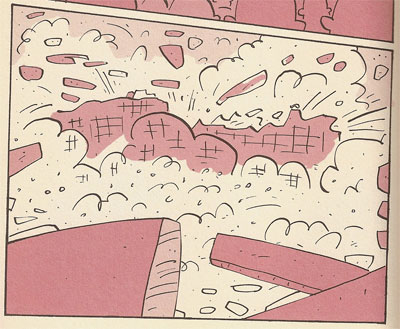 Out of context like this it’s pretty abstract. Hart has a simplified iconic style, and here we can get the idea of some kind of motion and clouds or dust or explosion or something… but what is it?

Now, take a look at that same panel with the panel that precedes it: 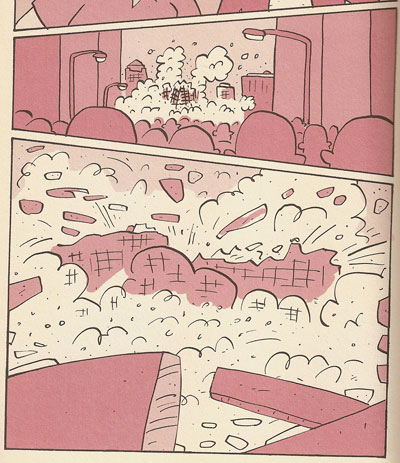 Now it becomes a little clearer with the context of the streetlights and the silhouetted heads in the foreground.

The simplified imagery works because of the accretion of context from one panel to the next. That’s a key part of many comics, particularly those with less detailed art styles.